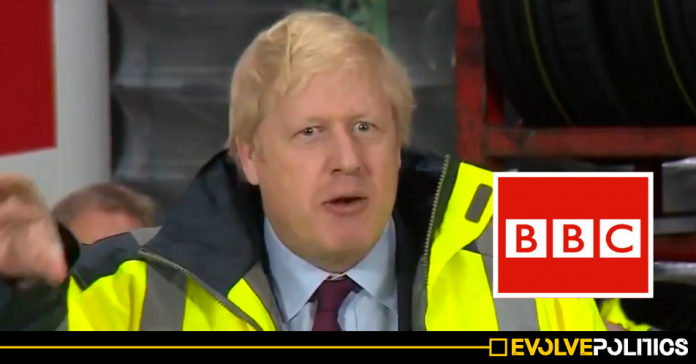 The Prime Minister Boris Johnson has said that he is looking into privatising the BBC should the Conservative Party win a majority in the upcoming General Election.

During a quesion and answer session in Tyne and Wear, the Tory leader questioned whether the licence fee system was sustainable, and said he was “looking at” other ways of funding the service.

He responded by saying the BBC should “cough up and pay for licence fees for the over-75s“.

However, despite saying he was “under pressure not to extemporise policy on the hoof“, Johnson went on to reveal that:

“You have to ask yourself whether that kind of approach to funding a media organisation still makes sense in the long term – given the way other organisations manage to fund themselves.”

“I think the system of funding out of what is essentially a general tax bears reflection. Let me put it that way.”

“How long can you justify a system whereby everyone who has a tv has to pay to fund a particular set of tv channels?”

You can watch Boris Johnson’s statement below:

“I am certainly looking at it… how long can you justify a system whereby everybody who has a TV has to pay to fund a particular set of channels?”

Boris Johnson is asked whether he would abolish the BBC licence fee, during a Q&A in Tyne and Wearhttps://t.co/BHbg7pnNBm pic.twitter.com/7HuUFAeIx3

The BBC was founded in 1922, and was set up to provide the general public with a truly impartial source of news and information amid a heavily slanted mass media.

The vast majority of Britain’s newspapers – such as The Daily Mail, The Sun and The Daily Telegraph – are owned by right-wing billionaires who support the Conservative Party.

However, the BBC has encountered stinging criticism during the General Election campaign after broadcasting numerous “mistakes” – all of which happen to be biased in favour of the Conservative Party.