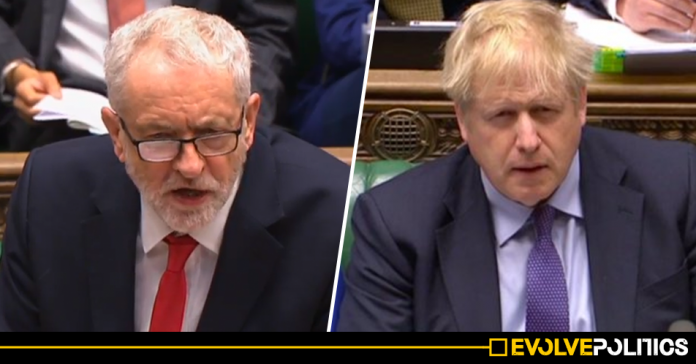 The outgoing Labour leader Jeremy Corbyn launched a blistering personal attack on Boris Johnson during today’s PMQs – highlighting the rank hypocrisy of the government’s decision to deport 17 convicted criminals, many of whom served time for minor offences and have not offended since, to their birthplace of Jamaica.

During his questions to the Prime Minister, the Labour leader initially claimed the government was trying to hoodwink the British public into believing that it was only deporting foreign nationals who had been convicted of serious violent crimes, stating:

“This cruel and callous government is trying to mislead the British people into thinking that it is solely deporting foreign nationals who are guilty of murder, rape and other very serious offences. This is clearly not the case.”

Corbyn then went on to highlight the case of a man who the Tories planned to deport for committing a minor drug offence:

“Take the example of a young black boy who came to the UK aged of 5 and is now being deported after serving time for a drugs offence.”

The Labour leader then, finally, made the attack personal – highlighting the fact that the Prime Minister had also committed similar offences to those pepetrated by the people he is now deporting, stating:

“If there was a case of a young white boy with blonde hair, who later dabbled with class A drugs and conspired with a friend to beat up a journalist, would he deport that boy?”

You can watch Corbyn’s unprecedented attack below:

“If there was a case of a young boy with blonde hair who later dabbled in class A drugs & conspired with a friend to beat up a journalist, would he deport that boy?”

We know who Jeremy Corbyn’s talking about, don’t we? And so does Boris Johnson 🔥#PMQspic.twitter.com/NZQkn7yWEw

In 2015, Jeremy Corbyn began his leadership of the Labour Party by declaring that he would not engage in personal attacks on his opponents – a stance which many Laour members and supporters urged him to change once Boris Johnson, who has an extraordinarily shady personal history, became the leader of the Conservative Party.

Up until now, Corbyn stuck resolutely to the pledge. But, after December’s heavy election defeat, it appears the gloves have now come off.

And, unsurprisingly, a lot of people were pretty happy about the change of style:

The face that says "how dare you compare a privileged white man to black men I'm deporting for doing the same thing I've done"
#PMQs pic.twitter.com/vkmFujlfmZ

Johnson really didn’t like Corbyn asking if a man who arrived in the UK from the US aged 5 then dabbled in class A drugs and conspired to beat up a journalist should be deported back to the US. Too close to home #PMQs

Why, oh why, did Corbyn not use these kind of attacks earlier? Things may have turned out so differently if he had.