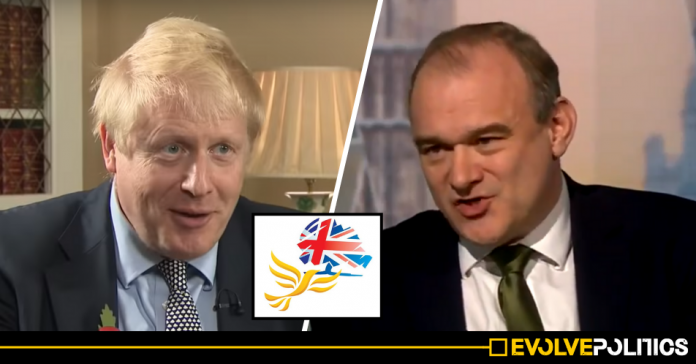 The Deputy Leader of the Liberal Democrats has confirmed that the party are planning to do a deal to prop up Boris Johnson’s Conservative Party over Labour in the event of another hung Parliament.

Speaking on The Andrew Neil show, Ed Davey confirmed that the Lib Dems are willing to enter into an “issue-by-issue” deal with the Tories if Boris Johnson’s party failed to secure a Parliamentary majority, but remained the largest party, in the upcoming General Election on December 12th.

Despite Boris Johnson repeatedly ruling out a second referendum under any circumstance, Davey rejected the idea that the only way to get another public vote on the issue would be with a Labour government in power.

“Do you accept that the only way you get a second Brexit referendum is with a Labour government?”

To which Davey responded:

No. The most likely result, I think looking at the figures, is probably a minority Tory government.

An exasperated Andrew Neil then went on to exclaim:

“So you’re counting on Boris Johnson to agree to a People’s Vote!?”

Davey responded by explaining that:

“No, listen, not only [that]! Who knows what’s going to happen in the next Parliament!?”

The Lib Dem Deputy Leader then went on to explain:

“We would vote issue by issue – whoever is in the minority government – and we would vote on the Lib Dem manifesto.”

But an increasingly baffled Andrew Neil again went on to exclaim:

“So, let me just get this right! I mean, I know you’re in favour of legalising cannabis, but you really think that Boris Johnson is going to give you a second referendum!? That’s your approach!?”

You can watch the extraordinary exchange below:

The Liberal Democrats infamously entered into coalition with the Conservative Party from 2010 to 2015, where they completely reneged on their pledge to scrap tuition fees – instead hiking them to £9,000 – and helped the Tories implement devastating cuts to public services including schools and the NHS.

Following the disastrous decisions made during the coalition, the Liberal Democrats were effectively wiped out as an electoral force in the 2015 General Election – losing an astonishing 49 seats and ending up with just 8 MPs.

Despite suffering electoral catastrophe as a result their previous deal with the Tories, Ed Davey’s admission that the party are more than willing to do it all over again clearly hints that the party do not appear to have learnt any lessons.