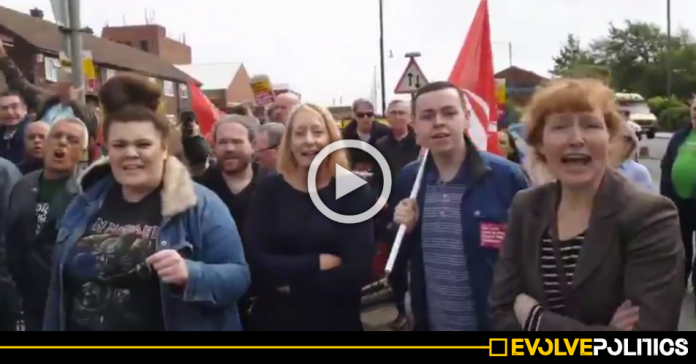 A video of the notorious far-right, neo-Nazi yellow-vest activist, James Goddard, has gone viral after he was forced to make a hasty, and ridiculously pathetic, retreat after labelling Liverpool “a sh*thole” in front of a large group of Scouse anti-fascist protestors in Bootle.

The video begins with the notorious far-right YouTuber being told to “f*ck off out of Liverpool” by a large group of anti-fascist protestors.

The notorious yellow vest thug, who has previously denied charges of assaulting a journalist and another public order offence in February, then goes on to label the protestors as the “an absolute disgrace” before responding to one protestor by stating:

“Why would I want to be from Liverpool? It’s a sh*thole.”

Unsurprisingly, Goddard’s statement sparked a huge backlash from the Merseyside crowd, with furious insults being traded back and forth.

After protestors warn Goddard that he is “surrounded” and that he should be careful what he says, the far-right thug replies by nonchalantly stating:

“Do you think I’m scared? I’m not scared of any of you. You’re traitors.”

After another barrage of insults are traded, a bearded man then comes into shot, stepping menacingly towards Goddard and forcing him to slowly retreat.

However, things quickly escalate, and Goddard can then be seen running at full speed away from the rampaging crowd.

You can watch the video below:

Following the incident, numerous reports from eye-witnesses claimed that Goddard had initially attempted to hide in a tree from the protestors:

Wood you believe it- James Goddard hiding in a tree (unconfirmed reports he also started shinning up it 😄), surrounded by anti-fascists!
Photo via @AntifaIntel pic.twitter.com/DSmc6P9rhi