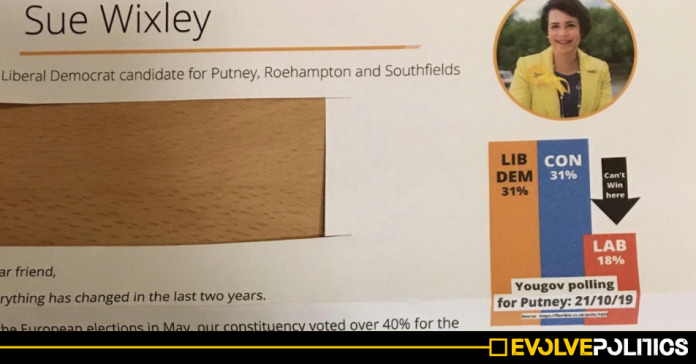 Just when you thought the Liberal Democrats litany of fake news scandals during the opening days of the 2019 General election campaign couldnt get any worse, one of the UK’s leading pollsters has confirmed that Jo Swinson’s party are now publishing entirely made-up polling numbers on their official campaign literature in order to dupe unsuspecting voters.

The official Liberal Democrat election leaflet showed an apparently official YouGov poll, suposedly conducted on October 21st, which claimed that the Lib Dems had polled level with the Tories in the constituency.

However, after being contacted by Bienkov, YouGov made the astounding revelation that no such polling had ever taken place:

Another very dodgy campaign leaflet from the Lib Dems.

Just spoke to YouGov and they confirm they have not conducted any polling in Putney. pic.twitter.com/1MsxNfPLpO

For comparison here is the bar chart the Lib Dems are putting out in Putney vs the result in 2017. pic.twitter.com/UY5QWlbT8r

What they appear to be doing is taking YouGov national polling and using some sort of model by a company called Flavible to project that to a hypothetical result in Putney but this is not “YouGov polling” of Putney as the leaflet suggests.

Whilst Jo Swinson’s party have already been called out for publishing highly misleading bar charts and fake quotes on election literature, this appears to be the first case of entirely made-up figures being used.

Unsurprisingly, many have already enquired whether the Lib Dems’ use of entirely fraudulent polling numbers is in breach of Electoral Commission rules governing election campaigning.

Does this break the law? The worry is whilst the Lib Dems putting out fake literature gets them rinsed on twitter, ordinary voters will only see this leaflet with no rebuttal. @joswinson’s lies could hand Johnson the keys to Downing St. https://t.co/yp0Ft5KrBp

Evolve will bring you more on this story as it develops.