Extensive polling by YouGov shows that Tony Blair returning to Labour would be a complete disaster for the party, and that they would lose 6% of voters to other parties.

However, The Independent seem to disagree with this finding, so they have have commissioned their own poll which apparently says that:

The exclsuive poll for The Independent by ComRes finds that 36 per cent said “Labour has more chance of winning a general election if Tony Blair is leader”,  but only 35 per cent said the same of Jeremy Corbyn. A further 30 per cent said they don’t know.

Voters agree with Jeremy Corbyn’s stance on a number of topical policy issues – but still believe that Tony Blair would have a better chance of winning a general election than the current Labour leader.

Even Labour List concede that Corbyn is far more electable in terms of policy. However, according to the new ComRes poll, we are now supposed to believe that voters think Tony Blair should be head of the Labour Party again. This poll shows that Blair has a 1% lead, but it is worth remembering at this point that many polls have a margin of error of around 1%.

This means the poll result actually shows a draw between the two. Funnily enough, that’s exactly what ComRes, the agency who carried out the poll, have reported on their own website

A new ComRes poll for the Independent and Sunday Mirror shows that the British public is split over whether Labour has more chance of winning a general election if Tony Blair or Jeremy Corbyn were leader (36% vs 35%).

However interestingly, when YouGov posed similar questions recently, they found something very different:

“YouGov research conducted in August found that, at that time, switching the leadership of the Labour party from Jeremy Corbyn to Tony Blair would bring Labour voting intention down from 21% to just 15%. Stripping out those who would not vote or don’t know who they would vote for, this translates to a drop from 27% to 20%.”

According to YouGov, not only would Blair be far less popular, he would also severely damage the chances of Labour being elected to office – causing voters that currently support Labour to abandon the Party.

The return of Blair would see large numbers of voters fleeing from the Labour party for the Greens and Liberal Democrats. In return, Blair would be able to bring in a few new voters from the Conservatives, Lib Dems and from among those who don’t know who to vote for if Corbyn was leader – but not nearly enough to offset those voters that leave.

Interesting, isn’t it? We have one poll conducted by The Independent that says Blair would be more likely to win a general election than Corbyn.

And another poll carried out by YouGov (who are supposed to be politically impartial) that tells a very different story, namely, that Blair would be a complete disaster for the party.

In the same article the Independent even says:

So they are basically admitting that their own headline is complete nonsense.

Most of those who think Labour would do better with Mr Blair are currently intending to vote Conservative (49 per cent say Mr Blair), Ukip (38 per cent) or Liberal Democrat (40 per cent).

This shows that The Independent’s poll doesn’t take into account the amount of people who currently support Labour, but would leave if Blair was to take power. Instead they focus on voters who might join if Blair was to be the head. The YouGov poll illustrates quite clearly the impact of a Blair leadership on likely voting intentions: 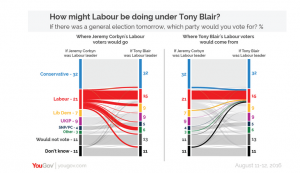 The Independent’s poll does not take into account likely voting intentions. It just shows that some people (mainly those who already support right wing parties) think that Labour would be better under Blair. This doesn’t mean anything, and it doesn’t mean that they would vote for Labour if Blair was the leader.

All it means is that people who most likely will not vote for Labour anyway think Blair would be better than Corbyn. As they are mainly supporters of the right, this is exactly what you would expect them to say. And as we have already seen, even then, overall it’s a draw between the two.

For those of us that do support Corbyn, and the policies of the centre left Labour Party, we should be worried about some of the polling data.

Time and time again we see that Theresa May beats Corbyn in terms of who people think would make a better PM.

However, some polls put Labour behind by only 5 points, and recent Labour victories in council elections are also a cause for optimism.

The Tories will not build the country that people want, they will not stop the privatisation of the NHS, and they will not offer people job security, nor decent wages.

We have to convince about 1.5 million people that we the answers to the problems that they face. Over time, I think if we work together we can convince many more than that.

There’s been a huge reaction against the politics I represent. But I think it’s too soon to say the centre has been defeated.

The centre of politics that Blair refers to is the centre right, and it is being slowly defeated over time. The goal is now to focus on a different centre – a new centre left. This will provide the optimistic vision of the future that the country will really benefit from.