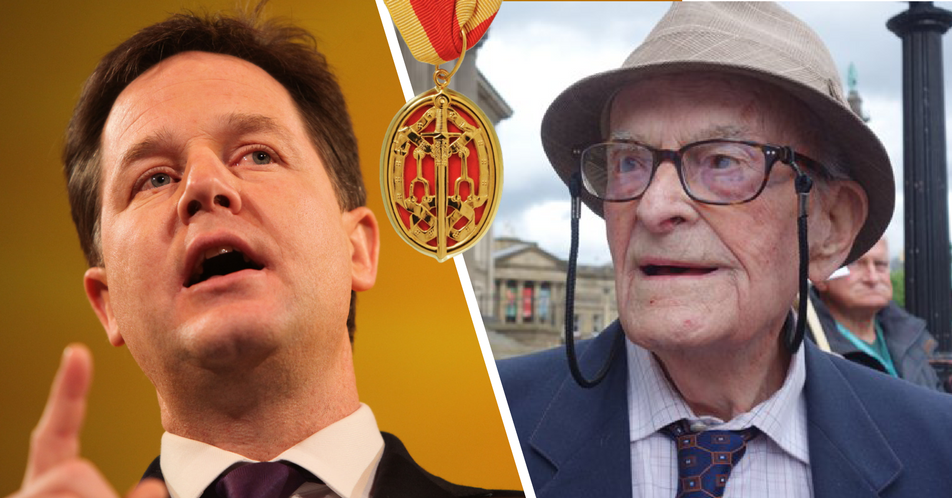 If he were Prime Minister, Harry Leslie Smith said he’d make it illegal for politicians and ex politicians to be awarded honours, because the levels of homelessness in the UK show that they were ‘derelict in their duty to humanity’.

Smith didn’t name any particular politician, but he may well have been thinking of Nick Clegg – soon to be Sir Nick – after being handed a knighthood in the New Year’s honours list.

If I were Prime Minster I would table a bill making it illegal for politicians and former politicians to be awarded #NewYearsHonours because when the pavements of Britain are littered with homeless citizens, you were derelict in your duty to humanity.

Harry Leslie Smith is a writer and activist with 154,000 twitter followers. He caused controversy in 2013 by announcing that – although he served in the RAF in World War II – he would no longer wear a red poppy because the ‘solemnity of remembrance for fallen soldiers in ancient wars’ had been turned by the government into a justification for current armed conflicts.

In 2014, he stole the show at the Labour party conference after making an impassioned speech in support of the NHS. It’s fair to say he’s a man who’s not afraid of speaking his mind.

Homelessness has increased massively since 2010, when the Tories formed a coalition government with the Liberal Democrats. There’s been a 134% increase in rough sleepers, and a 60% increase in households in temporary accommodation.

And on Christmas Eve, one Twitter user posted a heartbreaking photo showing dozens of homeless people huddling together for warmth on the streets of Manchester.

One of the politicians awarded a top honour in the New Year’s honours list is Nick Clegg, Liberal Democrat former deputy Prime Minister. He went into coalition with the Tories, overseeing years of austerity together with a massive hike in tuition fees (despite his promise to scrap them), and a huge assault on the welfare state which contributed directly to the homelessness crisis we see today. In 2013, he pushed through a motion at the Liberal Democrat conference calling for continued cuts to public spending in order to reduce the deficit.

As journalist Owen Jones puts it:

Clegg formed an austerity coalition because his socially liberal anti-state worldview was fundamentally in accordance with that of Tory leader David Cameron.

Almost a quarter of the knighthoods awarded this year went to politicians, including ‘Tory kingmaker’ and chair of the 1922 Committee, Graham Brady. Of the seven politicians given top honours (6 knights and a dame), four are Tories, and a fifth one (Clegg) might as well be.

Harry Leslie Smith recently announced that he would be spending the last years of his life touring refugee hotspots, in order to document what he describes as a ‘preventable tragedy that may lead us to another war as gruesome as the one I helped fight against Hitler over 70 years ago’. He will turn what he finds into a book, to ‘help shake people from their complacency’.

It sounds like an incredibly important project, but Harry Leslie Smith is unlikely to be offered a gong anytime soon for his work, which would no doubt be seen as the wrong kind of political: the kind that implicitly criticises the government for its utter lack of compassion. Which is a shame, really, because it means that Harry won’t have the pleasure of refusing it.