Home UK News Labour Party UK Latest News Actress who said “Corbyn made me a Tory” over anti-Semitism made almost... 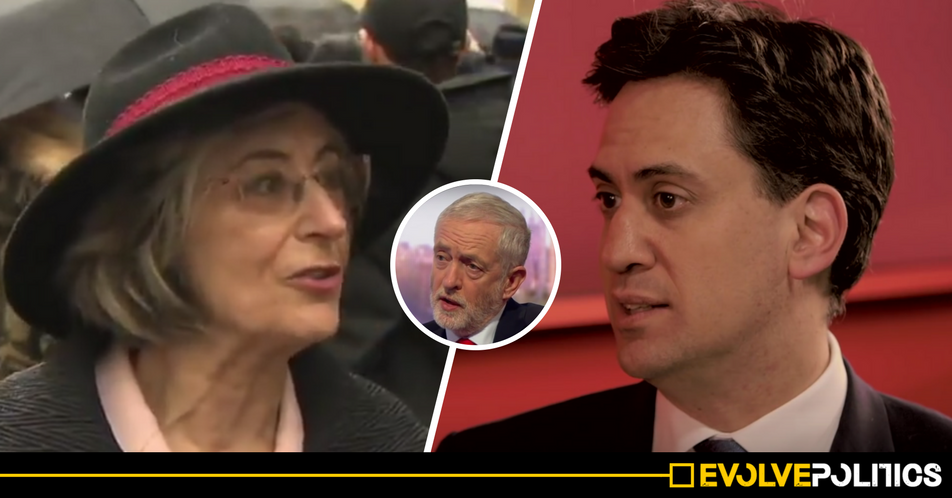 The actress who claimed that ‘Jeremy Corbyn made her a Tory’ over recent allegations of anti-Semitism within the Labour party made almost identical accusations against Labour leader Ed Miliband – who is Jewish himself – in 2014 after the then Labour leader offered his support for recognising the Palestinian State.

Maureen Lipman – who attended a protest outside Labour’s headquarters on the weekend and claimed that ‘Corbyn made me a Tory’ over the latest anti-Semitism row – said in 2014 that “For the first time in five decades, I shall not be voting Labour” over Ed Miliband’s support for a bill that endorsed recognising Palestine as a State.

Lipman said during the 2014 row that “I have always been a socialist and I believe in the principles of socialism“, but went on to say that Miliband’s support for a motion recognising the state of Palestine “sucks” at a time of rising anti-Semitism in Europe.

“I’m an actress, Ed, and I am often commended for my timing. Frankly, my dear, yours sucks.

The world is exploding around us. Isis is beheading our civilians while raping and pillaging across Syria and Iraq. Presidents (Vladimir) Putin and (Bashar) Assad are playing such heavy-handed games that we don’t know which rebel group to support.

Hong Kong may be about to see a replay of Tiananmen. Islamist terrorism in every spot on the globe and if one Jew had been responsible for any of those bombings, there would, I am afraid to say, have been another Kristallnacht.”

At this point in our history you choose to back these footling backbenchers in this ludicrous piece of propaganda?”

However, during her speech at the protest against anti-Semitism on the weekend, Lipman claimed that:

“He [Jeremy Corbyn] is standing with elements who are against everything that we stand for; hardworking, decent Jewish people of whom I am incredibly proud.

By doing nothing he is telling us the same thing he has been telling us for the last 30 years.

He wants a Marxist party. Because it’s worked so well in the rest of the world.

Everything you have heard today points to the fact that we have an anti-Semite at the head of the British Labour Party .”

Before claiming that she was a ‘disenfranchised socialist‘ and that Corbyn had “made her a Tory”.

The revelation that Ms Lipman made virtually identical accusations against the former Labour leader Ed Miliband – who is Jewish himself – that she is now making about Jeremy Corbyn, will surely do nothing to curb concerns that the latest anti-Semitism row is being used by some as both a stick to beat Jeremy Corbyn with, and as an attempt to silence criticism of Israel’s ongoing atrocities against the Palestinian people.

Both Mr Miliband and Mr Corbyn support a two state solution between Israel and Palestine, but despite Lipman’s claims in 2014 that she too holds this viewpoint, her criticism and unwillingness to support Mr Miliband for wanting to officially recognise Palestine as a State would suggest otherwise.

And now, after brazenly branding Jeremy Corbyn – a man who has campaigned tirelessly against racism and discrimination for 40 years – as an ‘anti-Semite’ during her speech at a protest outside Labour’s HQ on the weekend, coupled with the revelations of her virtually identical sentiments against fellow Jew Ed Miliband in 2014, one would be forgiven for thinking that this latest anti-Semitism storm was being used by some as a way to denigrate politician who dares to waver from the Establishment standpoint of supporting Israel at any cost whilst completely ignoring the increasingly desperate plight of Palestine.

Alongside criticising her fellow-Jew Miliband in 2014, Lipman also went on to criticise the left-wing Jewish group Jewdas who celebrated Seder with Jeremy Corbyn last week, saying that Corbyn’s attendance was “the absolute cherry on the top of Jeremy Corbyn ‘s behaviour” – a statement which clearly implied that Jewdas, like Miliband, held views which, in her eyes, perhaps singled them out as as the ‘wrong type of Jews’.

Whilst there is no denying that anti-Semitism remains a problem on the left – much as it does throughout society as a whole – Lipman’s latest accusations against Corbyn, coupled with her similar criticism of Ed Miliband’s pro-Palestine stance in 2014, clearly do not do any favours for those who genuinely wish to see a world entirely free of anti-Semitism and all other forms of racism.

Stamping out racism needs people who are not willing to take sides, and who are willing to look at the evidence objectively. But those who simply give their undying support to Israel without ever being willing to criticise their actions or accept that there are clearly two sides to the dispute – or even simply accept that the Palestinians are human beings who too deserve basic rights – are clearly no advocates of anything resembling peace or unity.