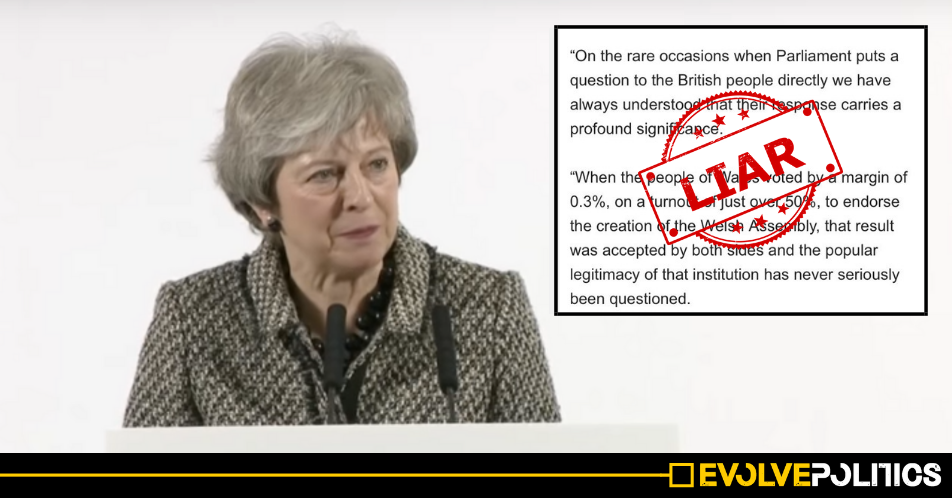 The Prime Minister Theresa May is set to deliver a speech in Stoke later this afternoon in a desperate last-ditch appeal to MPs to back her near-universally despised Brexit Withdrawal Bill. However, following Downing Street’s decision to brief out several extracts from the speech to journalists last night, an astonishingly hypocritical lie has been uncovered within the text before Mrs May has even delivered it!

In the speech, set to be delivered at a factory in Stoke-on-Trent later today, Theresa May is expected to compare the 1997 Welsh devolution referendum to the vote for Brexit, by stating:

“On the rare occasions when Parliament puts a question to the British people directly we have always understood that their response carries a profound significance.”

“When the people of Wales voted by a margin of 0.3%, on a turnout of just over 50%, to endorse the creation of the Welsh Assembly, that result was accepted by both sides and the popular legitimacy of that institution has never seriously been questioned.”

However, as uncovered in several fantastically-researched Twitter threads, Theresa May’s assertion that “both sides” accepted the result of the Welsh referendum is a complete and utter lie.

Indeed, following the 1997 vote, the Conservative Party completely opposed respecting the result of this referendum for more than 8 years – with the now Prime Minister Theresa May herself even voting against the bill in Parliament to respect the result and initiate the formation of the Welsh assembly.

Not only this, the Conservative Party even went into the 2005 General Election on a manifesto pledge literally offering up a second referendum on it! Seriously.

The astonishing revelation that Theresa May is primed to produce a categorical lie of Trumpian proportions in Stoke today was initially picked up by the New Statesman’s Stephen Bush, who wrote on Twitter that the extract from Mrs May’s forthcoming speech was “fascinating because it’s a lie“, before adding:

“the Conservatives went into the 2005 election pledging a referendum on whether or not to scrap the Welsh Assembly.

I honestly think it is one of the most interesting things about May is that she is intensely relaxed about saying things that are untrue: cf things said about the backstop, the whole “implementation period” shtick, etc etc.”

It's fascinating because it's a lie: the Conservatives went into the 2005 election pledging a referendum on whether or not to scrap the Welsh Assembly. https://t.co/5Hl21x4iTe

I honestly think it is one of the most interesting things about May is that she is intensely relaxed about saying things that are untrue: cf things said about the backstop, the whole "implementation period" shtick, etc etc.

The Conservative Party voted not to proceed with creating the Assembly *after* the referendum! https://t.co/ItV1q8VCQN

More detail to the incredible situation was published by History Student, Joe Oliver, who also brought to light the fact that the not only did Theresa May and the Conservative Party refuse to respect the result of the 1997 referendum in Wales, they also attempted to ignore the results of a similar referendum in Scotland, voting against a bill to implement the will of a massive 74% of the Scottish public who voted for the formation of a Scottish Parliament:

You can also find Theresa May, David Davis, Iain Duncan Smith et al voting against the Bill to set up a Scottish Parliament after a 74% vote in favour in a referendum.. https://t.co/KuBPPkOtNW (Rather bleakly in retrospect also complaining it would 'undermine Scotland in Europe')

And hilariously, the EU Professor Steve Peers also uncovered the fact that numerous Brexiteers who are currently demanding that everyone should respect the Brexit referendum actually argued the exact opposite following the Welsh referendum in 1997, tweeting the following:

9/ Owen Paterson here, complaining about implementing the result of the Welsh referendum based on a "tiddly widdly majority"… pic.twitter.com/miNRYsX0BR

10/ Paterson being terribly concerned about what the CBI said about the Welsh Assembly…not his approach when the CBI talks about Brexit though pic.twitter.com/NT9sVs4zyj

11/ There it is: Paterson voting against the bill to implement the result of the Welsh referendum. Saboteur! Cave dweller! Enemy of the peeeeple! pic.twitter.com/3qbm3YZ37a

So there you have it – the Tories have been categorically outed as a bunch of unashamed liars and frauds.

If the Prime Minister does indeed utter her expected statement about the Welsh referendum in her speech today, the whole country will now know that she is a liar on par with Donald Trump himself.

16/ And the person who cast that vote is planning to say this. Utterly Trumpian. pic.twitter.com/ON0YrLPF45