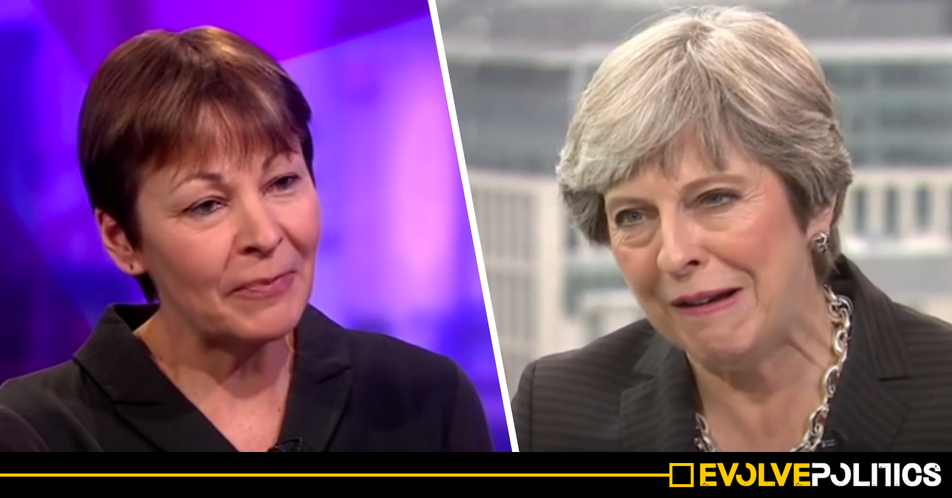 You know that feeling when you’ve handed in your notice and you’re no longer constrained by company policies on social media?  I suspect there may be a whiff of that new found sense of freedom in Caroline Lucas’ recent tweet about next week’s Parliamentary debate on 15 amendments handed down by the Lords on the EU Withdrawal Bill.

Having already announced her intention not to stand again as co-leader of the Green Party, Ms Lucas tweeted in refreshingly frank tones about government’s latest plan to debate all 15 amendments in one non-stop 12-hour parliamentary session:

“Can’t find another way to say this really, but this Government is really taking the piss – and treating the British people with contempt. We wait weeks and weeks, and then they force the whole Bill through in one session. And they call themselves democrats…”

Can't find another way to say this really, but this Government is really taking the piss – and treating the British people with contempt.

We wait weeks and weeks, and then they force the whole Bill through in one session. And they call themselves democrats… https://t.co/8s1YOnvFpN

It’s a move that has been roundly criticised by MPs on all sides who have for weeks been given no chance to properly debate Brexit related issues as whips nervously avoid anything controversial while the government continues to flounder in a sea of contradictory tides.

For Labour, David Lammy described the move as “total contempt for Parliament” as a letter sent to Conservative MPs today by government chief whip Julian Smith emerged, announcing that the amendments would be debated and voted on June 12th.

“This legislation will have a huge impact for generations to come. There is no shortage of available parliamentary time – what are they scared of?”

Total contempt of Parliament for Govt to try and railroad 15 amendments to EU Withdrawal Bill through the House of Commons in one day. This legislation will have a huge impact for generations to come. There is no shortage of available parliamentary time – what are they scared of? pic.twitter.com/F7Uebt5ehH

It’s clearly another attempt by Theresa May to subvert Parliamentary democracy and remove any chance for genuine scrutiny of her government’s ludicrous, and in the most part unworkable, approach to the UK’s orderly departure from the EU.

Yet another anti-democratic move from a PM who claims to respect the will of the people but apparently not the principles of parliamentary democracy and the views of MPs elected by the people to represent them.  Taking into account the time for MPs to physically vote on each amendment of around 15-20 minutes per division, there will remain around half an hour to debate each individual amendment.

Considering they represent some of the most historic and potentially game changing votes in our history, it’s nothing less than scandalous that any Prime Minister would seek to push them through like this.  There are probably local Conservative clubs that spend more time debating the menu for their annual gala dinner than their MPs will have to decide seismic changes to our national constitution.

It also offers a stark picture of how divided the Tories are on the whole Brexit escapade, with the House of Lords effectively acting as a bulwark against MPs like Jacob Rees-Mogg and Michael Gove who would rather see the country plummet over the cliff-edge of a no-deal Brexit than give an inch on their own rigid idealised views on the UK’s future.

With only months left to negotiate a deal, the Tory Party is still rife with internal wrangles and in-fighting, with obvious power-plays from the likes of Rees-Mogg who quite plainly sees himself as the next PM – a prospect that fills most sane people in the country with the same relish that they would have for eating a wasp sandwich.

The Conservative’s own party-within-a-party – the quaintly named European Research Group – are likely to be one of the main motivations for Mrs May’s latest desperate move.  No doubt she’s been made to feel the fetid breath of rabid anti-EU members such as Andrea Leadsom, David Davis, Liam Fox and of course howler-in-chief Rees-Mogg on her neck since the Lords introduced an element of reality into their febrile fantasies of world domination.

It’s clear from moves like this that Theresa May is being driven more by a need to placate her own rebellious party than by what’s best for the country.  Something that is pretty much the reason she, and we, find ourselves in this position in the first place.

As with the referendum itself, this sort of move is characteristic of the brinkmanship style of government we’ve seen from the Conservative Party since David Cameron thought he’d go for a hat-trick of referenda after getting away with two previous votes.  The idea seems to be to risk everything on a single vote (or in this case a single day of voting) in the hope that it will resolve all disputes in one fell swoop.

As we’ve seen with Scottish independence, electoral reform and now the creaking, directionless shambles of Brexit, they do nothing of the sort, and Theresa May could be betting her slender grip on power this time.

One of the most important amendments that will be voted on is the right for Parliament to have a ‘meaningful vote’ on the Brexit deal.  Something that Theresa May is vehemently opposed to, again calling into question her commitment to the democratic process.  Losing that vote next week may signal the end for her premiership, although it’s not clear if there’s any real appetite to replace her.

There’s a distinct hint of panic amongst the Tory Brexiteers as public opinion turns convincingly against the wobbly arc of travel being scribed by their leaders.  A survey on Tory website Conservative Home suggests that, as the reality becomes more stark, support for Brexit is waning.

Support in general is on a downward curve with a new YouGov poll showing a significant shift in public opinion since the referendum result 2 years ago.  47% of voters now report they think the decision to leave was wrong, against just 40% who said it was the right thing to do – the widest margin since the weekly survey began two years ago.

Even so, 69% of Conservative voters still backed Brexit, with 81% of those who backed Leave in 2016 saying they still believed it was the right decision.  Just 9% now say it was wrong.

But 62% of Conservative voters said the Government was handling Brexit negotiations badly, against 23% who thought it was doing well.  Whilst 73% of Labour voters and 83% of Lib Dems said the Brexit decision was wrong – but with Labour’s position on Brexit still unclear, it remains to be seen whether they will strongly support the Lords amendments next week.

There’s a rising tide of support now for a People’s Vote on the Brexit deal.  Not a second referendum, but a chance to have a say in the future of the country once we know what that future could be.  Those that claim that the referendum vote gave us that chance seem to have forgotten the binary nature of what we were asked.

We may have decided to leave the EU, that isn’t in dispute, but none of us really knew what that would mean.  Even now it’s evident that very few of those charged with negotiating our way out of 42 years of EU integration really know what awaits us on the outside.

It’s also obvious that we are totally incapable of organising all of the various complicated and interconnected principles and processes that will need to be in place for the day we are officially slated to leave.  Hence the need for a transitionary period, that itself is not even certain if we can’t agree a plethora of other points soon.

Allowing the runaway train wreck that the Tory party has now become to derail the course of British history simply to settle an internal argument and keep a weak and wobbly PM in her seat is not a price any of us should be prepared to pay, and the People’s Vote march on June 23rd is likely to make that point loud and clear.

As Caroline Lucas so aptly describes it, the Tories really are just taking the piss out of all of us now, and we deserve better.