It may not come as a surprise to anyone who picked up a newspaper during the 2017 Election campaign, but it has nonetheless been revealed that the Labour Party and Jeremy Corbyn received the ‘overwhelming majority’ of negative press coverage during the campaign, according to Loughborough University analysis.

The article was penned by members of the Loughborough University Centre for Research in Communication and Culture for the Election Analysis 2017 series – a website that aims to offer fresh insight into the intertwining media and political landscapes during one of the most important elections in recent decades.

The research evaluated coverage of all political parties in mainstream newspapers across five weeks of the election campaign. The results were then weighted by the circulation of the newspapers studied – and show that Labour received by and far the most negative coverage of any political party during election season.

Although the results show at times the Conservatives were on the ropes at times as well, particularly due to Theresa May’s inept campaign and the controversial dementia tax policy launched with the Conservative manifesto – they were still portrayed very favourably compared to Labour – who were consistently evaluated negatively by the British press. 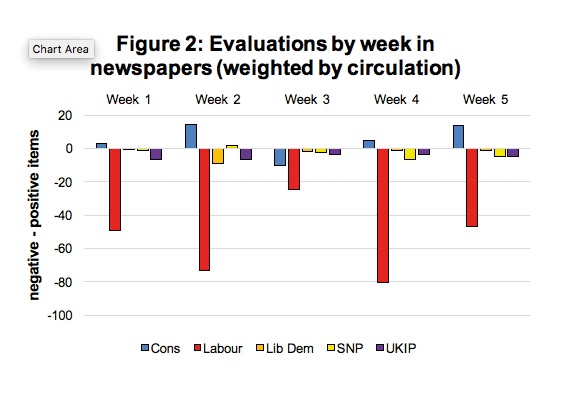 The analysis notes that “the British press are (in)famously partisan”, and the figures definitely lend support to this notion. As the study was weighted by circulation, Labour’s negative rating was “largely due to the hostile coverage provided by higher circulation papers such as the Sun, the Daily Telegraph and the Daily Mail”, according to the study.

This will come as no surprise to Labour leader Jeremy Corbyn, who mocked the Daily Mail and other hostile media outlets during his keynote speech to the Labour Party conference:

“The day before the election, one paper devoted 14 pages to attacking the Labour Party. And our vote went up nearly 10%.

“Never have so many trees died in vain. The British people saw right through it. So this is a message to the Daily Mail’s editor: next time, please could you make it 28 pages?”

We have no doubt that the Daily Mail will happily oblige in 2022.

This analysis emphasises the need for a change in Britain’s media landscape. The print press is dominated by a right-wing cabal who are more determined than ever to stop a resurgent Labour Party shaping a new political consensus. As the rise of new outlets on social media begins to hack away at their monopoly on the debate – it is more urgent than ever that we support fresh, independent journalism and offer our support to those who are either marginalised or maligned by the mainstream media.