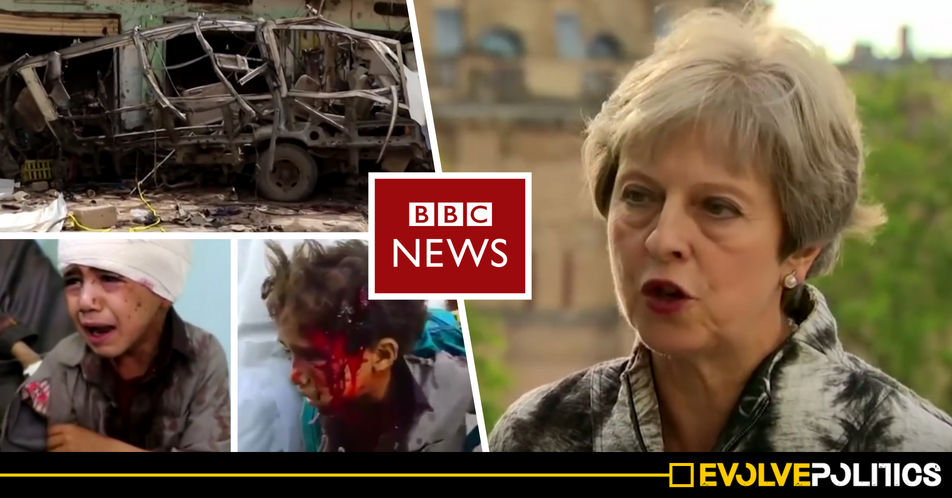 The British public broadcaster, the BBC, have been accused of intentionally covering up the role played by the UK government and Theresa May in the horrific murder of at least 29 children in a devastating attack on a school bus yesterday afternoon.

The International Committee of the Red Cross (ICRC) reported that the lifeless bodies of at least 29 children – the majority whom were under 10 years old – had been received into a hospital in Sa’ada, Yemen, following a Saudi-led military strike on a Yemeni school bus carrying dozens of school children.

The ICRC also reported that 48 others had been injured, 30 of whom were said to be children.

However, the Yemeni Al-Masirah TV station claimed that the figures were even higher, reporting that 47 people may have been killed, with another 77 wounded.

Furthermore, reports from the Save The Children charity indicated that the horrific attack may have been deliberate, with members of the charity’s staff who witnessed the attack describing that the bus was stationary when it was hit.

Responding to the brutal military strike, Labour’s Shadow Foreign Secretary Emily Thornberry slammed Saudi Arabia’s actions, but also went on to expose how the UK government – who sell billions of pounds worth of weapons, and provide military training and logistics to the Gulf State – played a crucial role in enabling this latest devastating Saudi atrocity:

“It is five months to the day since the Crown Prince of Saudi Arabia left London with the fawning praise of Theresa May ringing in his ears, and a renewed commitment from her government to supply the arms to support his disastrous military intervention in Yemen.

“In those five months, while all sides in this conflict have continued to behave with a wilful disregard for human life, it is the Saudi-led coalition that has inflicted the bulk of civilian casualties, as a result of its air strikes, its ground offensives, and its ongoing restriction of access for food, fuel, medicine, clean water and other essential humanitarian aid.

“And today, we have seen one of the worst atrocities of this war to date, with dozens reported killed and injured by Saudi air strikes on the town of Dahyan, the majority of them young children travelling on a bus, adding to the thousands of civilians already killed in this war as a result of Saudi attacks on civilian targets.

“While we will mourn the death of those civilians today, especially those children robbed of lives that had barely begun, we owe it to them to ask the question: how much longer are we going to let this go on?

“How much longer is this Tory government going to continue arming and advising a Saudi air force that cannot tell or does not see the difference between a legitimate military target and a bus full of children, a family wedding, or a civilian food market?

“How much longer is this Tory government going to continue claiming that the Saudis should be left to investigate themselves when these atrocities take place, even though the Saudis have already absolved themselves of any blame for the Dahyan attack, within hours of it happening, saying it was a legitimate target?

“How much longer is this Tory government going to abdicate its responsibility as pen-holder on Yemen at the UN Security Council without bringing forward a new resolution demanding an immediate ceasefire on all sides, an independent investigation of all war crimes, and forcing all sides to the negotiating table?

“Above all, how many more children in Yemen need to be killed by Saudi air strikes or die from malnutrition, cholera or other diseases before Theresa May will stop supporting this catastrophic, murderous war, and start taking action to end it?”

Thornberry’s attack on the UK government was both entirely accurate, and an absolutely damning indictment of the Tories’ ongoing support and wilful complicity in the brutal murder of innocent children.

Shockingly, in the past year alone, the UK government has almost doubled the amount of weapons it sells to countries on its own list of human rights abusers.

Furthermore, weapons sales to Saudi Arabia made up the vast majority these, totalling a staggering £1.13bn in 2017 alone.

In addition to supplying weapons to the Saudi dictatorship – a brutal regime who stand accused of numerous war crimes during their ongoing war against Yemen – Britain have also been exposed secretly providing training to Saudi air-force pilots.

Yet, despite Thornberry’s scathing criticism of the Tories’ active and ongoing support for the regime, as well as the obvious public interest in the British government’s willful complicity in such an horrific atrocity, the BBC’s article reporting the devastating attack failed to make any mention whatsoever of both the British government’s ongoing involvement or Thornberry’s statement.

Furthermore, if their reporting wasn’t shocking enough, the BBC also attempted to downplay Saudi Arabia’s despicable actions by making absolutely no mention of the Gulf State in their initial headline whatsoever.

Unsurprisingly, the BBC’s shameless refusal to include these major details attracted criticism:

The UK govt role in this war, not mentioned here yet again, is simply being covered up. https://t.co/B5H3KcdMWx

Dozens, mostly children, massacred in Saudi UAE attack on #Yemen bushttps://t.co/N32UiigL0p
As almost always if a US UK ally to blame, note how BBC headline doesn’t name the perpetrator, and article nowhere mentions that victims likely killed with US UK supplied planes and bombs

The contrast between Channel Four News’ report on the attack which fully covered the UK government’s complicity and ongoing arms sales, compared with the BBC article which omitted any mention whatsoever of the Tories or Theresa May, could not have been more stark:

I was *raised* on the BBC,
I trusted the News Programmes – the Commenators – the Editors, and the ethic of impartiality
That was a long time ago.
Something changed.
I now question it's impartiality.#BBCswitchoff

. @BBCNews has the structure, history & manpower to be the greatest champion of social justice, to earn every penny of the licence fee as a protector of the UK public.
Sadly it is nothing more than a platform and excuser for the corporate-political right-wing. #BBCSwitchOff

The @BBCNews is using tactics that are exactly the same as Goebbel’s Propaganda Ministry.

Historically, the BBC has consistently proven itself to be the most trusted broadcaster in the country.

However, following widespread criticism of its reporting, recent polls have begun to indicate that the public’s trust in the British public broadcaster may be beginning to wane.

And now, with such an obvious attempt made to whitewash the Conservative government’s complicity in the brutal atrocities committed by the Saudi dictatorships against innocent children, the BBC has surely now hit its lowest ebb.