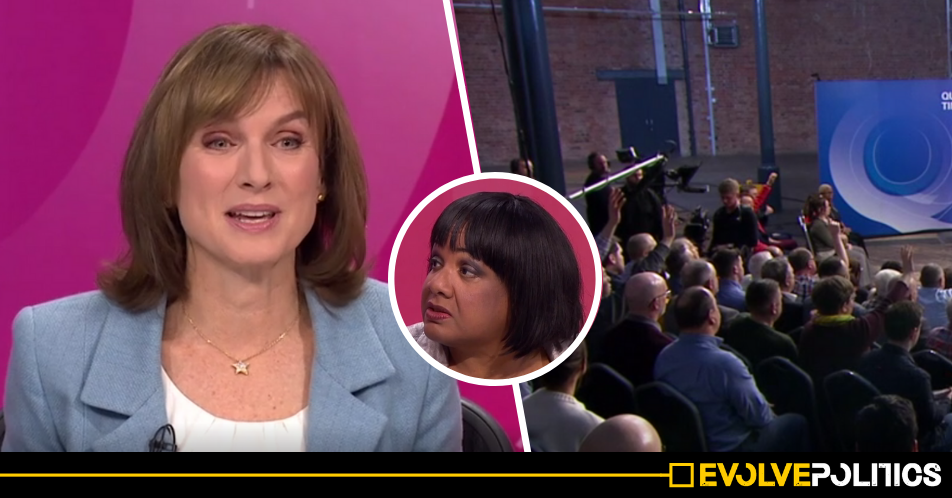 Members of BBC staff, including the new BBC Question Time host Fiona Bruce, have been accused of making fun of the Labour Shadow Home Secretary Diane Abbott and stoking negative audience sentiment towards her during a warm-up session before filming of Thursday’s edition of Question Time.

Since last night’s edition of Question Time aired, numerous matching allegations from people claiming to have been in the audience have emerged.

“Tonight I managed to wangle myself into the @bbcquestiontime audience. The way they stoked up the anti Dianne Abbott sentiment before hand was appalling – the BBC is in dire need of reform”

Tonight I managed to wangle myself into the @bbcquestiontime audience. The way they stoked up the anti Dianne Abbott sentiment before hand was appalling – the BBC is in dire need of reform

Jyoti has since described his experience in great detail exclusively to Evolve, writing:

New presenter Fiona Bruce came out to address the audience.  Hailed for her performance from the week before by fans, and after happily approving of the sycophantic praise that she was being adorned with from some quarters, Bruce proceeded to warm up the crowd.  I am aware that this was indeed a tradition with former host David Dimbleby, and audience members were encouraged to participate as vocally and enthusiastically as possible.  Nothing wrong with that, an exercise in democracy it would seem.

However, it was at this moment in time that the real hostility towards Diane Abbott became evident.  Each panelist was given a brief bio; Rory Stewart – a member of the Government, Kirsty Blackman – SNP and a remainer, Isabel Oakershott – ardent brexiteer and Anand Menon – academic expert on the EU.

When Fiona Bruce introduced Diane Abbott, Labour’s Shadow Home Secretary, she took it upon herself to instigate a roast. Comments along the lines of ‘let her know what you really think’ and ‘some may think she is in the shadow cabinet because of her very close relationships with Corbyn, nudge nudge, wink wink’ were made.  This indeed had the desired effect, and the carefully selected audience guffawed in delight as they had now been given licence to air their bigoted views in public.  An audience member in a pinstripe suit commented “I’m going to ask her to do a sum, but she will just claim its discrimination I’m sure.” This level of deliberate antagonism from the BBC is a disgrace, and the institution now desperately needs to be held to account.

Now these terms were set, the now legitimised hostility became all too clear.  A brief practice session took place, where the most reactionary members of the audience were identified so that they could be returned to during the show.  Diane was given the cold shoulder as the other panelists chatted together chummily, and she was spoken over as if she did not exist.

During the debate, the Shadow Home Secretary was interrupted by Fiona Bruce more times in three minutes that the others were in twenty.  Audience members barracked and abused her, questioned her legitimacy and jeered, empowered by the licence they felt they had been granted by the BBC to do so.  Sympathisers such as myself were simply ignored.  At one-point Fiona Bruce and Isabel Oakeshott ganged up like playground bullies to ridicule Diane Abbott over Labour’s polling, both making statements later proven to be false.

BBC’s Question time is portrayed as a truly democratic spectacle, where the public can engage members of the Government and Opposition, as well as leaders of their field.  In reality, it is far from it.  It is a farcical stage-managed state propaganda tool in which the BBC use and legitimise institutional racism, misogyny and bigotry to stoke up reactionary sentiment amongst the general population.  At the very least the BBC needs to be reformed and we must build a new media.  This cannot be done soon enough.

“I was in the audience of Question Time tonight – didn’t feel like a balanced audience, though the Leavers were loud. The jeers against Diane Abbott were worse than could be heard on the broadcast; was some humour at Diane’s expense from BBC staff before the recording.”

I was in the audience of Question Time tonight – didn't feel like a balanced audience, though the Leavers were loud. The jeers against Diane Abbott were worse than could be heard on the broadcast; was some humour at Diane's expense from BBC staff before the recording.

And a third audience member corroborated the claims, stating that that BBC Question Time host Fiona Bruce had “made fun” of Diane Abbott before the show, tweeting:

“Fiona Bruce basically made fun of Dianne Abott in the briefing before it aired and proceeded to do the same during the show, how is this presenter impartiality?”

During the show which aired, the Labour Home Secretary was repeatedly booed, jeered and mocked by the extremely hostile audience.

Responding to the reported abuse towards his colleague, Labour MP Dan Carden said that the allegations marked a “sad decline” for the show, tweeting:

“Hope we’ll hear more from audience members about the foul play at @bbcquestiontime last night. The toxic atmosphere whipped up by panellists & new chair Fiona Bruce is a further sad decline for the show, but @HackneyAbbott was calm and composed throughout.”

Hope we’ll hear more from audience members about the foul play at @bbcquestiontime last night. The toxic atmosphere whipped up by panellists & new chair Fiona Bruce is a further sad decline for the show, but @HackneyAbbott was calm and composed throughout. https://t.co/pnGAr6Yrip

However, in an emailed response to Evolve Politics, the BBC denied the allegations, stating:

“We firmly reject claims that any of the Question Time team treated any of the panel unfairly before and during the recording last night.”

The latest allegations from audience members weren’t the only controversy surrounding last night’s episode either, with Fiona Bruce also coming in for fierce criticism after falsely claiming Labour were behind the Tories in the polls:

Labour have polled ahead of the Tories in five of the last ten polls measuring Westminster polling intention, whilst the Tories have only held a lead in three.

Furthermore, contrary to Bruce’s claims, a poll tracker for the past year actually puts Labour slightly ahead of the Conservative Party.

Evolve Politics also contacted the BBC regarding Fiona Bruce’s false claims about Labour’s polling performance. We have still not received a reply.