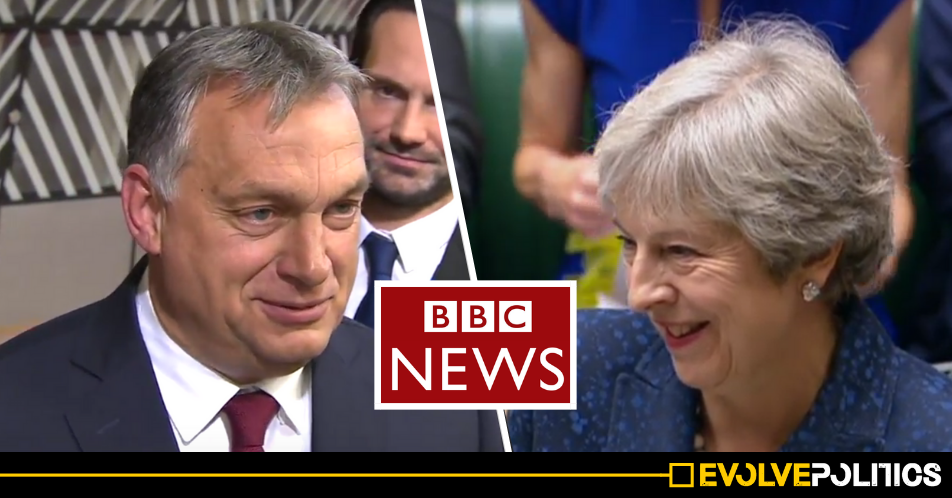 In recent weeks and months, the British mainstream media – in particular, the BBC – have published headline after headline, newsreel after newsreel, and almost certainly what amounts to miles worth of column inches endlessly analysing the ongoing row over a supposed resurgence of antisemitism on both the political left and within Jeremy Corbyn’s Labour Party. Yet, given the fact that this unprecedented media reportage clearly shows that antisemitism in politics is considered headline-worthy by the British press, it seems incredibly strange that the likes of the BBC have been entirely silent about the fact that Theresa May’s Tories have just lent their overwhelming support to a far-right political party who are brazen and unashamed Jew-haters.

Earlier today, the European Union held a vote proposing to pursue disciplinary action against the Hungarian Prime Minister, Viktor Orban, and his far-right Fidesz Party, over alleged breaches of the EU’s core values.

The allegations related to Orban’s governing party pursuing essentially neo-fascist policies, including the violation of press freedoms, an attempt to rig the judiciary in their favour, placing limits on the functioning on non-governmental organisations by accusing them of posing threats to national security, and, probably most worrying of all, engaging in dangerously extremist antisemitic, Islamophobic and anti-migrant rhetoric.

The EU vote to pursue disciplinary action against the Hungarian government ended up being backed by just over the required two thirds of MEPs, with 448 voting in favour of action, and 197 voting to support Orban’s party.

However, of the 197 MEPs who were more than happy to see Hungary’s creeping fascism go completely unchallenged were – yes you’ve guessed it – a large number of British Conservative Party MEPs loyal to the current Prime Minister Theresa May.

Following the news emerging that Conservative Party MEPs had voted to support the outrageous actions of the Hungarian government, a spokesman for the Labour leader Jeremy Corbyn stated:

“It’s absolutely shocking that Conservative MEPs voted against that motion.

Effectively they voted to support the behaviour of the government of Hungary, its abuse of basic democratic rights including judicial and media independence, its denial of refugee rights and its pandering to anti-semitism and Islamophobia.

As Jeremy said yesterday, Theresa May should condemn the Hungarian government and should support this investigation and action.

We hope that a resolution can be found that respects a nation’s right to set their own constitutional arrangements within the framework of international norms.”

However, despite the fact that the Conservative government’s MEPs were indisputably pandering to a brazenly antisemitic party, the BBC – who have spent the last few months reporting endlessly about antisemitism within Jeremy Corbyn’s Labour Party – have, for whatever reason, chosen not to mention this hugely significant fact anywhere on their website whatsoever.

In fact, the BBC’s article reporting the EU vote makes no mention of either Theresa May or the Conservative Party’s choice to support the far-right party, and even fails to report the damning statement made by Jeremy Corbyn or his spokesman.

Furthermore, the BBC News at Six – who have featured numerous headlines debating left-wing antisemitism during the past few months – made absolutely no mention of the Conservative Party’s support for the Hungarian government despite its blatantly antisemitic rhetoric.

In recent years, Viktor Orban and his far-right Fidesz Party have been repeatedly criticised over antisemitism, and have even been accused of ‘waging a war on Hungary’s Jews‘ .

Whilst commemorating the 170th anniversary of the 1848 Hungarian Revolution, President Viktor Orban made the following deeply dangerous statement, which repeated numerous antisemitic tropes reminiscent of Hitler, in alleged reference to Hungary’s Jewish population:

“They do not fight directly, but by stealth; they are not honourable, but unprincipled; they are not national, but international; they do not believe in work, but speculate with money; they have no homeland, but feel that the whole world is theirs. They are not generous, but vengeful, and always attack the heart – especially if it is red, white and green [the colours of the Hungarian flag].”

Orban has also been accused of blaming “all of Hungary’s problems on a Jew” – in the form of the Hungarian-born Jewish businessman George Soros – even warning voters that the liberal philanthropist was plotting to take over the country. Orban even went as far as commissioning a deeply antisemitic advertising campaign that plastered Soros’ grinning face on billboards with the caption “Don’t let George Soros have the last laugh.“

Last year, the Hungarian PM even chose to praise a former ally of Adolf Hitler, Miklos Horthy – a man who actively collaborated in the deportation of around 500,000 Jews to Auschwitz in 1944 – as an “exceptional statesman”. Orban’s astonishingly disrespectful statement unsurprisingly drew a scathing attack from the US Holocaust Museum.

It is absolutely clear that Hungary’s far-right regime are unquestionable antisemites, and the British Conservatives Party’s choice to openly support them is not only utterly shameful, but is deeply hypocritical given their attacks on the Labour Party over recent charges of left-wing antisemitism.

However, given the BBC’s tidal wave of coverage over Labour’s extremely nuanced and highly debatable antisemitism row, their choice to report nothing but stony silence over the Conservative government’s support for unashamed, unquestionable, Nazi-style Jew-hatred, is arguably an even bigger outrage.

You can complain to the BBC via their complaints page here: