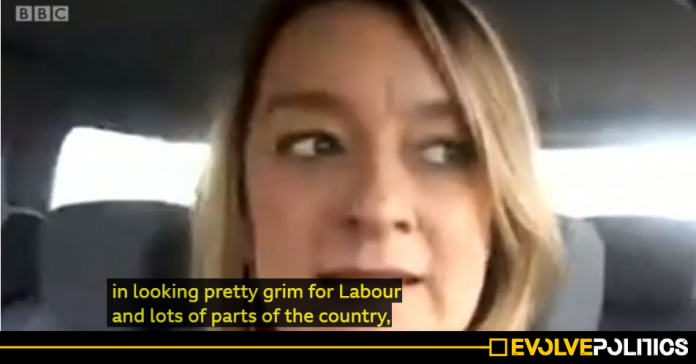 The BBC’s Chief Political Editor, Laura Kuenssberg, has become embroiled in yet another General Election reporting scandal after appearing to break Electoral Law by revealing confidential information about how Postal Voters had cast their vote prior to the results being revealed tomorrow.

Speaking during a seemingly impromptu piece to camera on the BBC’s Politics Live programme, Kuenssberg claimed that the postal votes were “looking pretty grim for Labour in lots of parts of the country“.

“The Postal Votes, of course, have already arrived. The parties – they’re not meant to look at it – but they do kind of get a hint. And on both sides people are telling me that the postal votes that are in are looking pretty grim for Labour in a lot of parts of the country.”

Revealing how people may have voted based on informaton from opened Postal Votes before the 10pm polling day cutoff is illegal because it could influence the way others choose to vote.

The Representation of the People Act 1983 clearly defines the law, stating:

It is understood that the information would have been uncovered at what are know as postal vote “opening sessions“.

The Electoral Commission stated just 6 days ago on Twitter that “Anyone attending a postal vote opening session has a duty to maintain secrecy.“

Politics Live usually receives around 800,000 viewers each day, and Kuenssberg’s influential and potentially criminal comments will have been widely heard across the country.

You can watch Laura Kuenssberg’s comments in full below:

“The reason broadcasters are not allowed to reveal postal votes before 10PM polling day is it influences the vote.

The reason broadcasters are not allowed to reveal postal votes before 10PM polling day is it influences the vote.

I really have no explanation of how this is allowed under broadcasting code pic.twitter.com/j1UfbPlVUP

Kuenssberg’s latest “error” comes just days after she tweeted an outright lie about a Labour activist supposedly “punching” a Tory Minister’s aide to her more than one million followers.

A video later revealed that the Tory aide had actually walked into the Labour activist’s arm whilst they were pointing to their right and looking in the opposite direction.

The BBC has already been roundly criticised for their coverage of the 2019 General Election after encountering numerous gaffes which all just happen to benefit the Conservative Party.

Evolve Politics contacted both the BBC and the Electoral Commission for comment.

The Electoral Commission advised us to report the incident to the police.

Whilst, in a brief statement, a BBC spokesperson told Evolve Politics:

“The BBC does not believe it, or its political editor, has breached electoral law.”

However, Evolve also understands that the police are now dealing with multiple reports about the incident from members of the public.

The BBC have since removed today’s episode of Politics Live from their online iPlayer website.