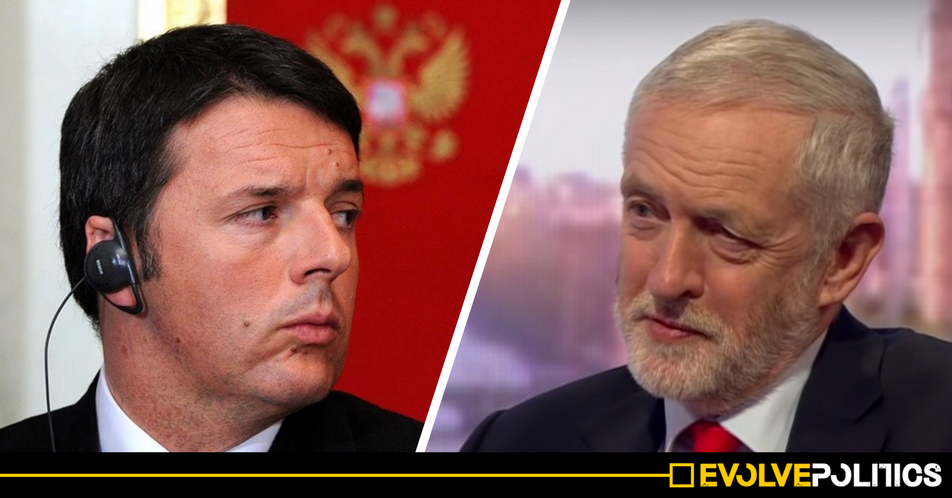 The former Italian Prime Minister Matteo Renzi has reportedly been forced to resign as the leader of the Italy’s Democratic Party after a humiliating collapse in the General Election last night.

Renzi’s party, whose policies and outlook could be comparable to those implemented by the UK New Labour party under Tony Blair, suffered catastrophic losses at the polls, garnering just 18.7% of the vote at the time of publishing – down from 25.4% in 2013.

The Five Star Movement – a populist party who allow their members to decide party policy – look set to garner the biggest share, with 32.5% of the popular vote at the time of publishing.

The results will come as a devastating blow to the former Italian PM, who also suffered pain at the ballot box in 2016 after losing a referendum on constitutional reforms – a defeat which forced him to step down as Prime Minister.

This is a very clear defeat for us…

Renzi will be a well-known figure to many left-wing Labour party members after the former Italian PM wrongly predicted ‘electoral suicide’ for the UK Labour Party, after members voted in Jeremy Corbyn as leader in 2015.

After the 2015 Labour leadership elections that saw Corbyn elected with 59.5% of the vote, arch-Centrist Renzi said:

We are not talking about being a Blairite or an anti-Blairite, but deciding if we are happy just to take part or if we want to win,

Far from suffering electoral meltdown, the UK Labour party saw their biggest increase in vote share in a general election since 1945, managing to strip the ruling Conservative Party of their majority in Parliament in the process.

With a newly-invigorated, truly-left-wing Labour party having made huge gains in the UK’s snap General Election in June 2017, and with Renzi’s party – who stuck solidly to their pro-neoliberal, free market rhetoric during the Italian election campaign, suffering a humiliating defeat – surely now is the time for centrists to realise that the vast majority of people who are crying out for things to actually change are not going to vote for politicians who are so obviously quite comfortable leaving things pretty much as they are.

Furthermore, with the Five Star Movement’s adoption of Direct Democracy – a scheme which allows their members to participate in online votes to decide party policy – and with the party’s leaders crying out for a crackdown on things such as corruption and cronyism in politics, there has probably never been a worse time to be a centrist in politics.

It’s clear that the current status-quo is only really working for those at the top. And when those of us at the bottom are so clearly crying out for change all across Europe, it is inexplicable that centrist politicians believe they can continue to convince people that the same policies which have so clearly led to our current crisis are still the right ones to lead us out of it.

It was supposedly Einstein who said that ‘the definition of insanity is doing the same thing over and over and expecting different results.’

And in our current political climate, it would appear that our beloved centrist, ‘same-old same-old’ politicians, clearly aren’t geniuses.