In the past week, discount store B&M have been condemned for selling “pro-anorexia” scales featuring the quote “nothing tastes as good as skinny feels”. 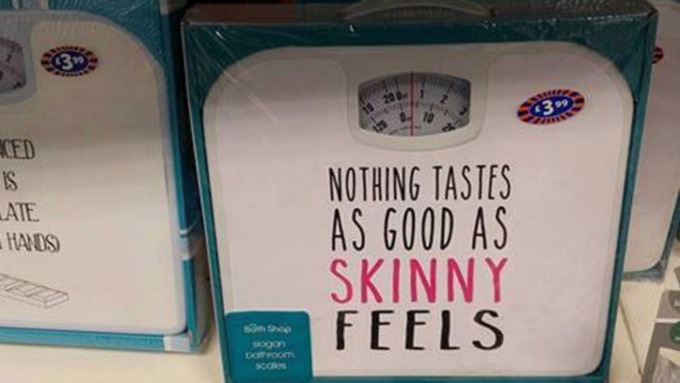 An image of the product was posted to Facebook several days ago and has received thousands of shares. A spokesperson for B&M said: “We have asked our supplier to withdraw this particular quotation from this range.”

The phrase is attributed to Kate Moss in November 2009 after the release of her TopShop collection, when a WWD interviewer asked her if she had any quotations she lived by. Unsurprisingly, the quote was also heavily criticised then.

The Joint Commissioning Panel for Mental Health estimates over 1.6 million people in the UK are affected by eating disorders such as anorexia and bulimia, but as so many people do not seek treatment, the real figure may be closer to 4 million. It is estimated that 10% of those suffering die from their disorder, making it the most lethal mental illness. Less than half of anorexia nervosa sufferers are ever “cured”.

This isn’t the first time a mainstream shop has come under fire for a controversial slogan relating to mental illness; in January 2014 high-street clothing store Urban Outfitters created a stir online from a crop-top with the word “depression” printed dozens of times on it.

In 2010, the same store sold a t-shirt featuring the words “eat less” in decorative writing.

When it comes to fashion and main-stream shops selling products with phrases that trivialise mental illness, the clue is in the name: these big names are trying to make life-threatening problems like anorexia fashionable. Why would they do this? As the CEO of Abercrombie and Fitch, Mike Jefferies, said in 2013: “we go after the cool kids. We go after the attractive all-American kid with a great attitude and a lot of friends. A lot of people don’t belong [in our clothes], and they can’t belong. Are we exclusionary? Absolutely.”

He added: “we want to market to cool, good-looking people.”

Of course, Abercrombie and Fitch went on to sell their clothes in bigger sizes after their sales continued to fall, but from Mr Jefferies’ attitude, it would have been with a grudge.

Although this approach does take the attitude that the general public are idiotic enough to shop in a store based solely on the type of other people in there, it also makes it perfectly clear what the fashion industry is all about – the cool, thin, pretty people.

If you’re conventionally unattractive, the shops think you have no place on the high street. A lot of people are aware of the level of photoshopping done on the covers of fashion magazines and when the finished product presents an idealistic expectation, it has a massive affect on the minds of the easily influenced.

It’s no surprise that most eating disorders begin to develop at 16-19 years old. With celebrities there is a “us” and “them” model – the affected want to look like the people they admire.

When it comes to the high-street, the focus shifts to being “us” and “you” – the shops want to attract the “cool, good-looking people”, and if that means using slogans like “eat less” or “nothing tastes as good as skinny feels” to change or exclude those who don’t fit the model, it’s a risk shops are willing to take. This trivialisation, even glorification, of mental illness is shameful, and risking – if not costing – lives.

Decorative fonts and pretty colours will not disguise the sinister note of elitism the high street is selling us. It’s not good enough that the products were taken off the shelves; they should never have produced in the first place.

How you can support the EvolvePolitics project

We can only remain independent through subscriptions and one-off donations from our readers – money that helps keep our writers producing truly independent journalism, free from establishment bias or agenda. If you like what we do and want to donate to keep our project going, there are several different options available to you.

You can subscribe to our website for a small amount of money each month – you can choose between £1, £2, £5, and £10 a month, depending on how much you can afford to set aside. By becoming a subscriber, as well as helping to keep us independent, you will also be the first to know about our stories by recieving email updates when we post new articles.

Whether you can spare pennies or pounds, we are extremely appreciative of all of your support.