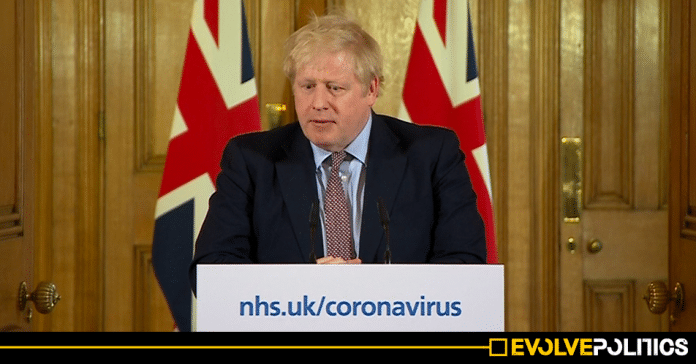 Boris Johnson has been accused of screwing over small business owners across the country after refusing to officially order them to close in light of the increasingly serious Coronavirus outbreak – a decision which could mean businesses such as pubs, cafes and restaurants may be unable to reclaim for the inevitably huge loss of earnings on their insurance.

Earlier today, the Prime Minister conducted a press conference to outline the government’s next steps to try and deal with the Coronavirus crisis currently sweeping across the UK.

As well as advising people to work from home if possible and to only travel if absolutely necessary, Boris Johnson also demanded that people refrain from non-essential public gatherings and to avoid crowded places such as pubs, clubs, restaurants and theatres.

However, in contrast to decisions made by numerous other European countries, the Tory leader refused to officially order such businesses to close.

Johnson’s refusal to order an official closure means that small businesses could be left unable to claim for the impending loss of earnings on their insurance.

Most small businesses will have some form of Business Interruption Insurance (BII) which protects them from loss of earnings in the event of them having to close for an extended period of time.

A lot of BII policies only cover loss of earnings based on a specific list of diseases – and, as coronavirus is a relatively new disease, most current policies will not include it.

However, BII policies can also allow claims as a result of government actions – such as an official order to close – if they result in the business losing income.

Unsurprisingly, the PM’s decision not to make the order official has caused consternation with small business owners – with many understandably worried that they could go under due to significantly decreased custom.

Johnson has also been accused of putting the interests of highly profitable multinational insurance companies above the financial viability of tens of thousands of small business owners across the country:

What a cowardly position to take. What a dereliction of duty. To pass on the decision to confused small business owners, performers and consumers. He has chosen to protect the insurance industry. Suspect he will have to go back on this anyway and it looks terrible.

Once upon a time the Conservatives claimed to be the party of small businesses.

Now, they're the party of 'advising' rather than ordering the closure of pubs, restaurants and clubs so big insurance companies can avoid paying out. Small businesses will go under because of this.

Johnson signs death warrant on the pub industry. If you tell ask our customers to stay away but don't instruct us to close we cannot claim on insurance but cannot pay our bills.

I am a nightclub owner in Kensington and Chelsea. You can’t tell the nation to avoid ‘pubs and clubs’ and not officially ‘close us’ so that we can claim our insurance. Please help @MayorofLondon @SadiqKhan @amylame @GregHands @BorisJohnson #coronavirusuk

When the authorities closed Broadway, it allowed those producers to make their insurance claims. When British audiences don't turn up because they're 'advised' not to go, the insurance companies are in the clear. Boris Johnson has made it clear which sector he wants to help out.

One early implication of today’s statement is uproar in the hospitality world. By telling people to avoid restaurants & bars, rather than asking them to shut, it’s feared businesses will be denied insurance. Unfair & sets a terrible precedent. Urgent clarification needed. https://t.co/08SKS425i5

By not ordering pub closures but effectively killing their footfall & therefore income he prevents pub landlords from accessing insurance money that would have arisen from an ordered closure.

The government needs to formally order the closure of pubs, clubs, cinemas, and restaurants otherwise they can’t claim insurance. They will merely close and never reopen. These businesses don’t have large cash reserves and many survive week to week.

Massive problem for restaurants, pubs, entertainment industries. Government says don't go, but has not enforced closure, meaning none of them can claim insurance.

One event organiser tells me: "If they don't enforce any closures then pretty much the whole arts will go bust."

Do pubs, bars, restaurants, cafes, theatres, cinemas close or not?
Ridiculous of @BorisJohnson to just 'suggest' it & not ban it.
Not least because these businesses will be forced to close but can't claim on insurance if they're not ordered to.
This must be clarified – urgently.

In May 2019, Boris Johnson received more than £25,000 from the British Insurance Brokers Organisation for a speaking engagement – and there is little doubt that his latest decision will greatly please every insurer across the country.

However, with footfall set to drastically decrease over the coming weeks and months, many are predicting that thousands of small business owners could be forced into bankruptcy as a result of the government’s decision.

The Conservative Party have historically been seen as the traditional “party of business” – with small business owners usually voting for them above Labour in large numbers.

Yet, if the Prime Minister refuses to change direction to calm the nerves of small business owners, it is highly likely their owners will desert the party in droves.

UPDATE: The Association of British Insurers (ABI) have since released a statement claiming that only a “small minority” of “typically larger firms” would be able to make a claim for loss of earnings if the government officially ordered them to close:

“Irrespective of whether or not the Government order closure of a business, the vast majority of firms won’t have purchased cover that will enable them to claim on their insurance to compensate for their business being closed by the coronavirus.

“Standard business interruption cover – the type the majority of businesses purchase – does not include forced closure by authorities as it is intended to respond to physical damage at the property which results in the business being unable to continue to trade.

“A small minority of typically larger firms might have purchased an extension to their cover for closure due to any infectious disease. In this instance an enforced closure could help them make the claim, but this will depend on the precise nature of the cover they have purchased so they should check with their insurer or broker to see if they are covered.”