This isn’t satire, we promise.

Financial Times columnist and George Osborne’s fawning biographer, Janan Ganesh, has been nominated for a Political Commentator of the Year award. The Comment Awards, run by Editorial Intelligence, are meant to celebrate the very best of British social commentary. There’s only one problem with that.

Ganesh, like the vast majority of the mainstream commentariat, have utterly failed in understanding and analysing the state of British politics in 2017 – as well as the rise of Jeremy Corbyn over the last two years. Instead of genuinely trying to understand Corbyn’s movement, the state of Labour, and the wider dissatisfaction with mainstream politics rooted in the centre-ground, Ganesh flippantly labelled his supporters “thick and pigsh*t” in a childish Twitter rant. Political Commentator of the Year, eh? 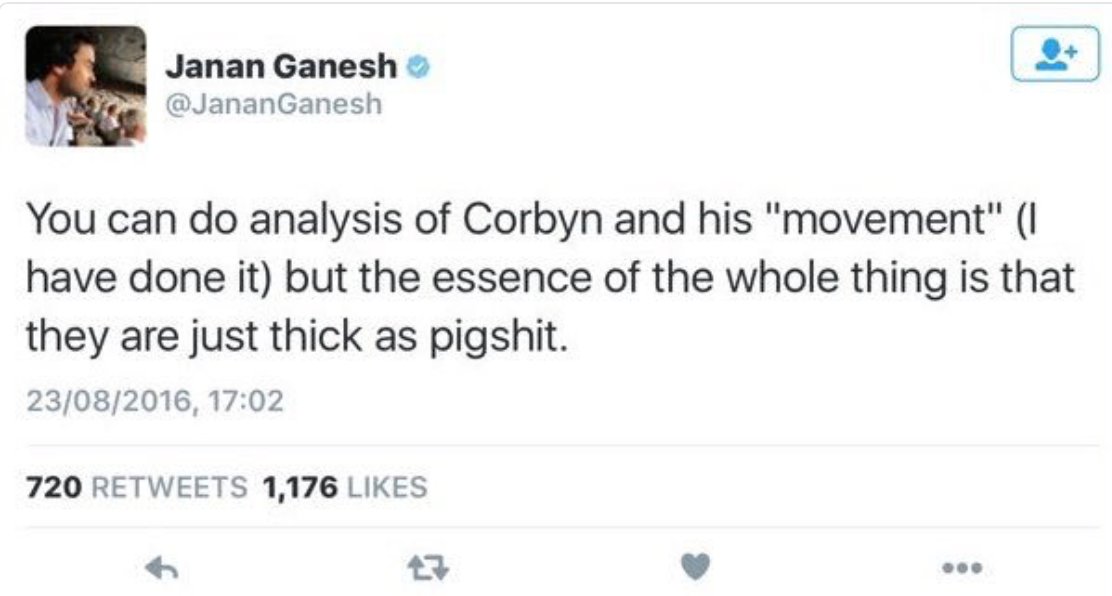 Not only that, but anti-Corbyn columnist Nick Cohen has also been nominated for an award. In his regular Sunday column for The Observer, Cohen manages the amazing feat of writing the same anti-Corbyn article every single week. Moreover, in his piece on the Labour Party conference last month for The Spectator, he went as far as comparing Labour MP Chris Williamson to Benito Mussolini.

It is beyond belief how these columnists could warrant such adulation for being so crass and offensive about 40% of the electorate, as well as being embarrassingly wrong about Jeremy Corbyn and the Labour Party. The fact that mainstream pundits like Ganesh and Cohen are still getting rewarded for the guff they come out with tells you all you need to do about the state of British journalism in 2017.