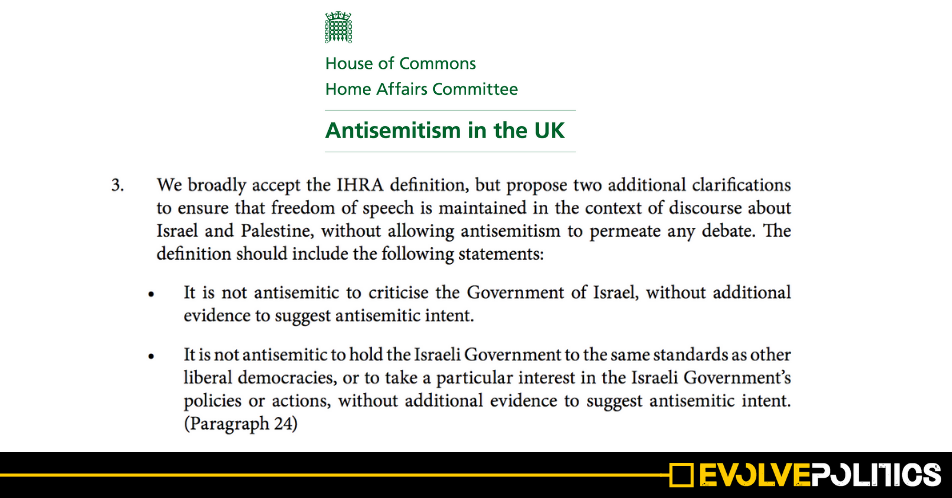 In 2016, a cross-party Home Affairs Committee, including both Labour and Conservative MPs, recommended that the government should add free speech caveats to the IHRA definition of antisemitism which are almost identical to the ones the Labour Party has just inserted to ensure the document does not impinge on legitimate criticism of Israel.

Despite adopting the IHRA definition of antisemitism, including all 11 examples, into its code of conduct yesterday, the Labour Party has come under fresh attack from members of the British Jewish establishment for including a so-called free speech caveat to the document.

The free speech caveat was added to ensure that Labour members were free to criticise the actions surrounding the creation of Israel, where hundreds of thousands of Palestinians were ethnically cleansed from their homes and land in order to make way for the Jewish Israeli State.

The Jewish Labour MP at the centre of the row, Margaret Hodge, attacked the party’s decision to add the caveat, tweeting:

“Two steps forward and one step back. Why dilute the welcome adoption IN FULL of the #IHRA definition of #Antisemitism with an unnecessary qualification?”

Hodge’s latest statement denouncing the free-speech caveat comes despite her stating just 6 weeks ago that she would be perfectly happy for such amendments to be made, telling

“I don’t understand why we cannot just adopt it (the IHRA definition). If they don’t think there is enough in the definition that allows people to criticise the Israeli government they can add those clauses.”

Furthermore, the Jewish Leadership Council accused the Labour Party of attempting to “shamefully undermine” the IHRA document, stating that adding a free-speech caveat it would drive ‘a coach and horses through‘ the definition.

The JLC statement goes on to claim that “the IHRA definition does not restrict free speech” and that adding a free-speech caveat would only ‘protect the free-speech of those who hate Israel“:

UPDATE: The JLC have issued a new statement on @UKLabour adoption of the IHRA definition of antisemitism pic.twitter.com/bL16mj23dD

However, a 2016 cross-party Home Affairs Committee recommendation states that whilst it  broadly accepted the IHRA definition, the government should implement “two additional clarifications to ensure that freedom of speech is maintained in the context of discourse about Israel“.

Despite the Committee’s recommendation being almost identical to the free-speech caveat implemented by the Labour Party yesterday, the fact that adding such a clause was clearly a mainstream position in 2016 has now been conveniently forgotten by both the mainstream media in their reporting on Labour’s latest decision, as well as many mainstream Jewish organisations.