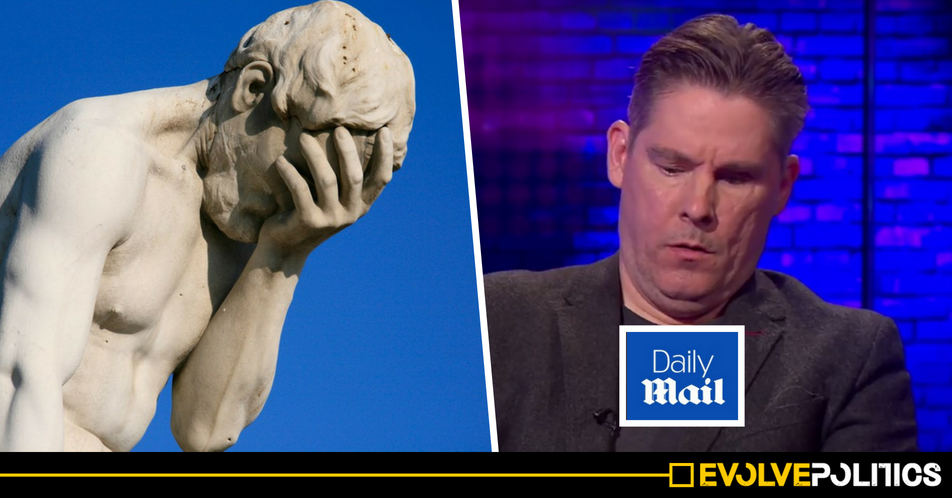 Daily Mail Columnist Dan Hodges is notorious across the UK social media sphere for getting virtually everything wrong, but his brief Twitter spat with a ‘recognised representative of the Jewish community’ last night was almost certainly one of the anti-Corbyn Mail hack’s most cringeworthy gaffes to date.

In yet another attempt to slate the Labour leader over the ongoing antisemitism row, Hodges initially tweeted:

“Corbyn team have now insulted the Jewish community’s representatives so many times it’s no longer possible to conclude it’s just a cock-up.”

Almost immediately the Mail hack’s latest anti-Corbyn tweet was picked up by a seemingly unassuming man named Maxim Lundlack-Orr, who opened his retort by simply quipping:

“Could say the same for you.”

Seemingly irritated by a trite response from someone appearing to be just another generic Jeremy Corbyn supporter, Hodge tweeted back asking:

“Which recognised representative of the Jewish community have I insulted.”

And after obviously failing to even bother looking at Lundlack-Orr’s Twitter bio, Hodges’ responded by asking:

“And what leadership position do you hold in the community.”

To which Lundlack-Orr immediately tweeted back stating:

“I sit on the board of deputies.”

Lundlack Orr was of course referring to the organisation who have been central to the ongoing Labour antisemitism row, the Jewish Board of Deputies, whom he has been elected to sit on as a representative for the Liberal Jewish Youth Movement.

Unsurprisingly, the magnificent Twitter thread quickly went viral, with numerous Twitter users declaring it one of Hodges’ most ridiculous own-goals to date:

Okay he only works for the Mail on Sunday, but still. He's as thick as mince. They should sack the dunce pic.twitter.com/cTQaYEeUch

Hodges’ latest hilarious error will come as no surprise to those who have followed his disastrous journalism, and embarrassingly diabolical predictions.

In 2012 the Daily Mail hack famously predicted that UKIP would collapse at the 2015 General Election. Hodges was so confident in his forecast that he promised to strip naked and streak down Whitehall if they gained more than 6%.

Hodges finally made good on his promise in 2016:

The Mail hack also completely ballsed up the 2017 General Election too, predicting a Tory majority of 110:

People asking from my final prediction. Tory majority 110. There you go Jeremy Corbyn. Don't say I never do anything for you…

Before the results were announced, Hodges even took the time out to mock Evolve’s then Senior Editor Matt Turner for correctly predicting that the Election wasn’t a foregone conclusion:

Jeremy Corbyn famously went on to defy all his critics by snatching away Theresa May’s majority and force the Tories into a humiliating deal with the DUP to try and make sure they had enough votes to pass legislation.

To his credit, however, The Mail hack has previously attempted to make light of his own hilarious reputation for getting things wrong – most recently by trying to jinx England into winning the World Cup:

England will not win the World Cup. There. I have done my bit.

However, in true Hodges’ fashion, even his attempt to use reverse psychology on fate failed, with England crashing out at the Semi-Final stage to Croatia.

Dan Hodges truly is the gift that keeps on giving.