Yesterday’s Daily Mail front page was dominated by an article criticising the ‘shambles’ of recent long delays for British holidaymakers at European airports.

Unsurprisingly, the tabloid blamed this on the EU, citing extra security checks as the reason for the delays.

This article has generated considerable confusion however. And it’s hardly surprising given that the Daily Mail has been criticising the EU for insufficient border controls for years.

Whenever a major terror attack takes place in Europe the Mail invariably finds a way to blame it on immigration, usually including a point about lacklustre security checks on migrants entering EU countries.

Yet the stricter regulations were introduced precisely to combat terrorism. Apparently it’s not worth trying to prevent terror attacks if this holds up Brits at the likes of Malaga and Amsterdam airports.

The Mail tries to imply that there is some sort of EU conspiracy going on here, with British travellers being targeted, by pointing out that the new rules apply in cases where passengers from outside the Schengen zone, which includes Brits, are travelling into it. 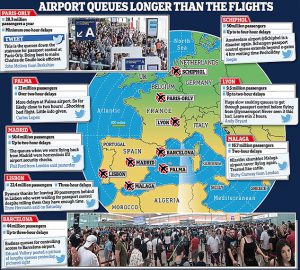 Yet within the Schengen Zone, there is no border control whatsoever. Would the Daily Mail prefer that Britain was part of this area, despite being known to firmly oppose freedom of movement?

Let’s be fair to them though, the Mail writers do at least try to hide the hypocrisy of the article, by making the point that the delays are more directly the result of insufficient staffing at the airports in question, implying that the new regulations have been poorly implemented by the EU.

Yet the states to which these airports belong have had over 18 months to prepare for the introduction of the new regulations, which were first presented by the European Commission in December 2015 and amended in March this year, a point made by both the Mail and the EC (possibly the first time these two organisations have ever been in agreement). So the delays are not the result of the regulations themselves, but of inadequate planning by the countries involved and poor management at the individual airports.

And just to put the icing on the cake, the tabloid also criticises the EU for ‘[watering] down the rules at ports and road borders’ – in the very same article.

So the rules at ports and road borders are not enough, but those at airports are excessive. It would be nice if the Daily Mail would be kind enough to tell us all what exactly is the right level of border security, given that they are clearly the experts on this issue.

It is more likely the case that the Mail wants strict regulations to be imposed on people trying to enter Britain, and lighter rules applied to Brits jetting off for a week of lounging on the sunbed. Because of course the right of Britons to a stress-free holiday always comes before the safety of European countries.

Dear little England. You'll have to get used to it or go on holiday in Britain & support a local economy in a country you're so proud of. pic.twitter.com/ZvOIVZCqWm

Alas, in its desperation to always be outraged at something to do with the EU, the tabloid has contradicted itself once again. Take a bow, Daily Mail. Take a bow.

Your subscriptions go directly into paying our writers a
standard fee for every article they produce. So if you want to help us stay truly independent,
please think about subscribing. We literally couldn’t function without the support of our
fantastic readers.

If you don’t want to subscribe, but still want to contribute to our
project, you can make a one-off donation via the donate button below. All your donations go
directly to our writers for their work in exposing injustice, inequality and unfairness.
Donate