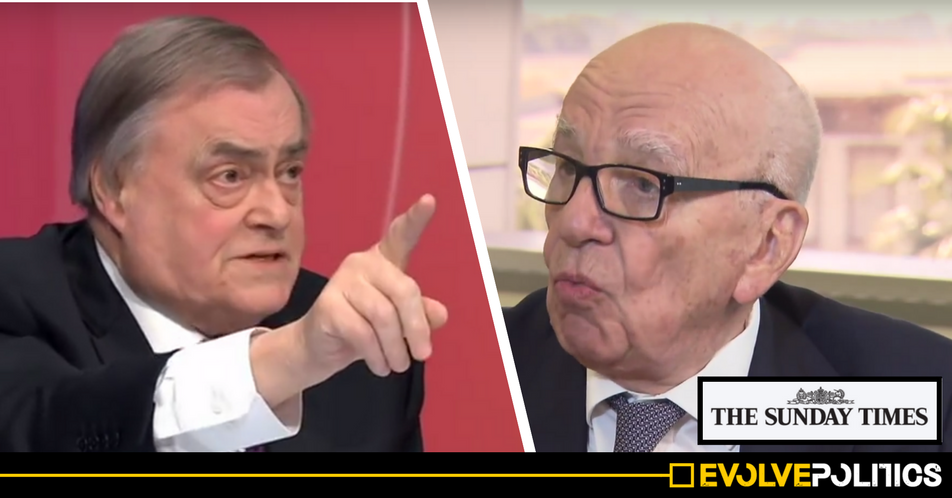 Writing on Twitter, Prescott said that he is currently taking ‘legal advice’ over allegations that he was the target of a practice known as ‘blagging’ by employees of the newspaper – a highly controversial method of obtaining information about high-profile figures, sometimes through illegal means.

I have been informed that I was one of the Cabinet Ministers targeted by the Sunday Times and am now taking legal advice https://t.co/iX5eE6huiQ

A BBC article released last night reveals startling revelations from a Private Investigator (PI) who claims he was contracted by the Sunday Times newspaper from 1995-2010.

Former PI John Ford claims he used illegal methods such as pretending to be a bank or utility account holder in order to obtain personal information from leading Labour politicians such as Tony Blair and Gordon Brown when they were in government.

Ford told the BBC that the nature of his work for the Sunday Times was:

And speaking about other techniques he used to obtain information, Ford said:

However, a spokesperson for The Sunday Times denied the allegations, saying:

The paper strongly rejects the accusation that it has in the past retained or commissioned any individual to act illegally.

Some allegations related to the research work of John Ford have been aired previously and we cannot comment on the specifics of these new allegations which all predate 2011.

The initial Leveson inquiry was launched after Murdoch-owned News International were implicated in the infamous phone hacking scandal where the voicemail messages of murdered schoolgirl Milly Dowler, and numerous high profile celebrities and politicians were hacked into by journalists eager for stories.

As well as phone hacking, the initial Leveson inquiry dealt with cases of alleged police bribery and improper influence in the pursuit of stories by media organisations. The second Leveson inquiry – now scrapped by the Tories – was supposed to be an investigation into the alleged cosy relationship between journalists and the police.

And, with Theresa May said to have held a private meeting with Rupert Murdoch, as well as allowing the media baron – who owns The Times, The Sunday Times, The Sun and is also said to be attempting a full takeover of Sky – ‘astounding access’ to Number 10, it doesn’t exactly take a genius to work out why the mooted Leveson 2 inquiry was dropped by the incumbent Conservative government.

But now, with fresh revelations emerging into yet more alleged sordid practices by a Murdoch media outlet, it may well be the cosy relationship between the media and the Conservative Party next in the spotlight.

However, in order for justice to be done, Britain will actually need to pull its collective finger out and elect a government who aren’t so obviously in bed with the super-rich elite.