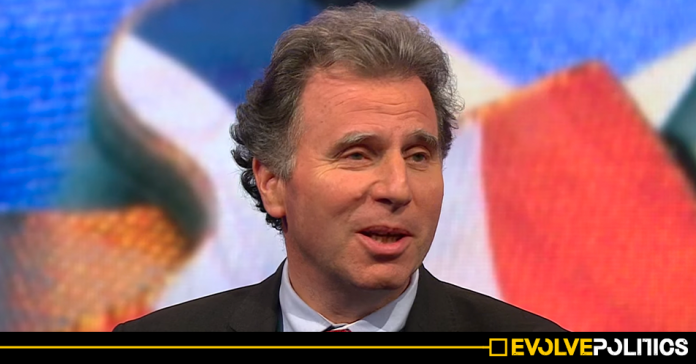 The ex-Tory MP and cabinet minister, Sir Oliver Letwin, has sparked outrage after claiming that global systems could come under attack by a person with autism.

In an unchallenged remark made on BBC Radio Four this morning, Letwin spoke about how global networks, such as telephone systems and power grid, are at risk of being compromised by various sources.

In addition to terrorists or state actors, Letwin claimed that “some autistic person” or “some strange youth” could instigate cyber attacks against global networks:

“[Global networks are at risk of] a terrorist attack, or another country attacking us, or in fact just some autistic person or some strange youth sitting in some part of the world.”

You can listen to Letwin’s comments below:

Unsurprisingly, people on Twitter responded almost immediately, accusing Letwin of spreading “myths” about autistic people and causing offence to them.

Disability campaigner, Nicky Clark – whose two children are both on the autistic spectrum – said she was in “tears of frustration” as it was the “second time in a couple of weeks” that someone on BBC Radio Four had “conflated autistic people with criminality“:

Oliver Letwin promoting his new book on cyber crime said on risks “some autistic person who gets in” The second time in a couple of weeks that @BBCr4today has conflated autistic people with criminality. I’m in tears of frustration here. It’s just routine now. https://t.co/xhAImNpsqz

And the criticism of Letwin’s crass comments kept coming:

Wtf? Oliver Letwin on @BBCr4today actually just said “some autistic young person or strange person sitting in a room” could be among of list of threats to a networked society. Justin Webb failed to call him out on it.

Oliver Letwin on his book, refers to potential attacks on our technology by, “some autistic person or some strange youth…..who gets in & does something,” – in my view neurodiverse folk are the ones finding the solutions. Let’s not perpetuate myths #r4today @BBCr4today

Just heard ex minister Sir Oliver Letwin on R4 describing his novel Apocalypse How. and saying that ‘it would only take some autistic person or strange youth to …’ to attack the network. Am livid! The dismissive way he referred to autistic people is offensive

Don’t often speak out on things like this – but I am appalled that Oliver Letwin’s comments on @BBCr4today about “strange autistic” young people as part of promo for his book were not challenged immediately.

@BBCr4today Potentialy distressing for people on the autistic spectrum to hear themselves described as “strange” and a threat to society. Disgraceful Oliver Letwin.

“Misunderstandings about autism and judgemental attitudes towards autistic people persist in our society: 50% of autistic people and their families tell us they sometimes don’t go out because they’re worried about how people will react to their autism.

“Language like this is unhelpful. It’s a lazy and wrong stereotype reinforcing a view about all hackers being strange autistic people.

“All of us, but particularly our public figures, have the power to shape public understanding of autism. We must use this for good.”

Letwin was appearing on Radio Four in an attempt to promote his new book on cyber crime.

The former Tory Minister has often been described as the “architect” of NHS privatisation – and his latest comments are highly unlikely to improve his negative public image.