A twisted turn of public opinion has seen many on social media turn against survivors of the tragic Grenfell Tower fire, opening the floodgates to a torrent of racial abuse.

Bitter rants can be found all over social media, with people claiming that the Grenfell survivors are undeserving of help – often basing this disturbing opinion on the ethnic origin of survivors. Even more distressing is that the odious comments are often strongly supported by up-votes and likes.

In an interview with BBC News, Grenfell survivor Lillian begged people to ‘please, please stop the abuse’ and explained how she is too scared to tell anyone she is from the tower for fear of online racist attacks.

‘I wonder which boat he came off?’

Recently some truly awful comments about the victims have been circulating on Twitter, such as “It’s the nature of third worlders: push & push until you get what you want” and “All illegals should be put in a camp”.

Responding to some who seemed sceptical that any such attacks had been occurring, Twitter user Celeste Thomas was fast to highlight some of the racist abuse she had seen online:

No. She means these ones, want to defend them? pic.twitter.com/Bl0STx1mJ4

These are just a couple of examples of the numerous racist attacks that have been directed against the Grenfell survivors on social media platforms recently. Many of the public seem to think that they don’t deserve help or support because of their ethnicity.

However, along with these racist attitudes, the residents are also being attacked from almost every other possible angle.

When Sky News posted a video about some of the victims of the disaster enjoying a deserved summer break in Bognor Regis – paid through generous donations – the majority of the top comments were simply awful. They were enough to make you deeply ashamed to live in what is fast becoming a despairingly callous, vindictive and uncaring British society. 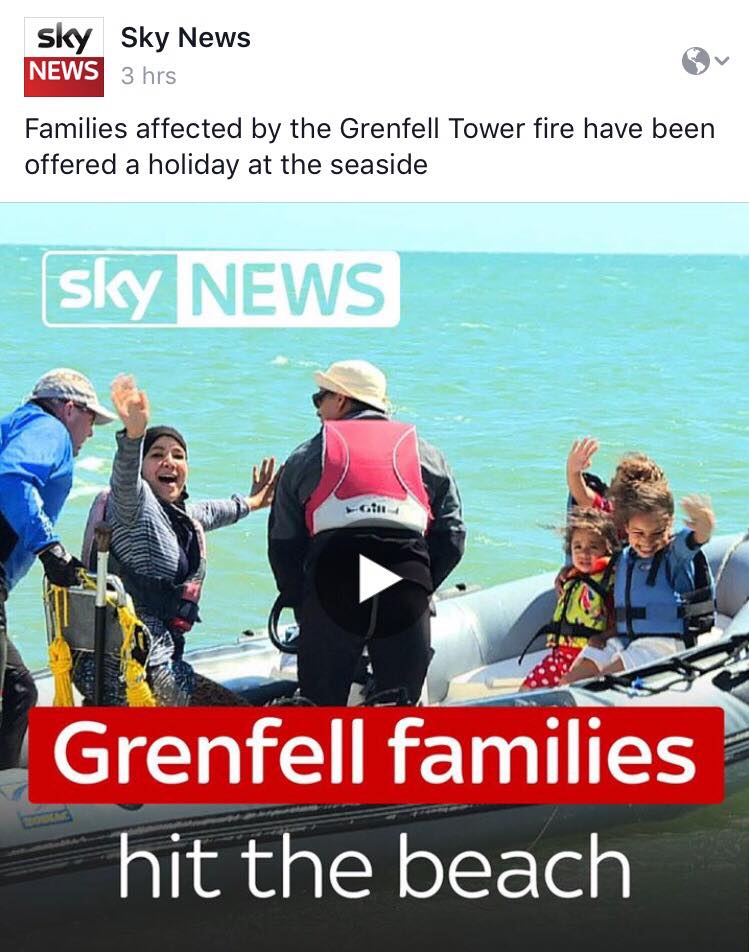 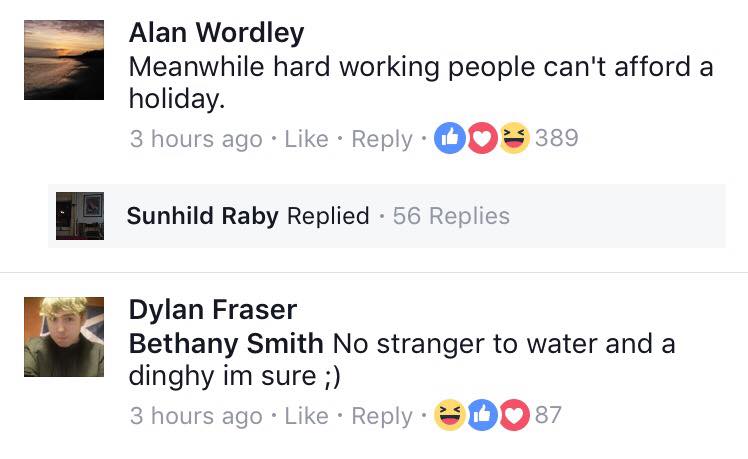 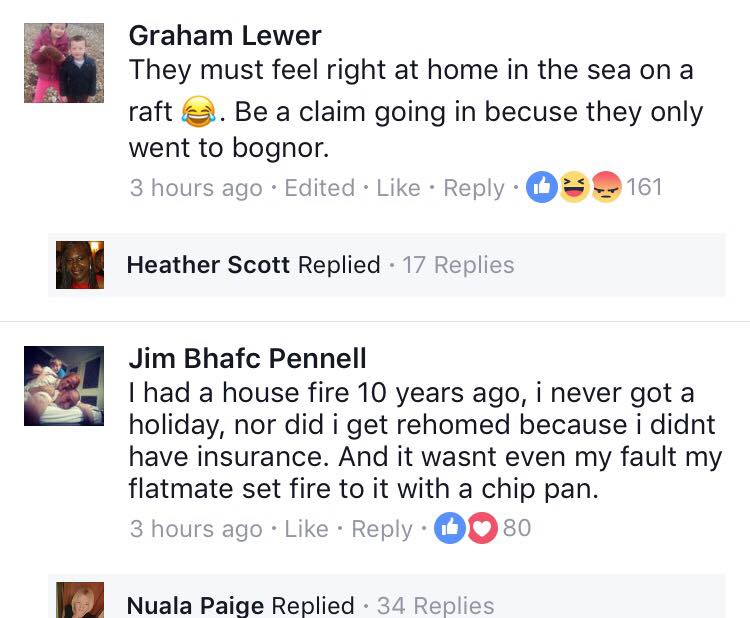 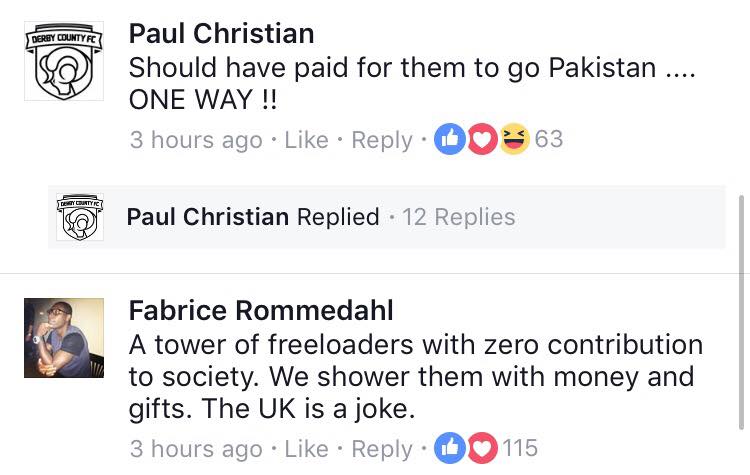 It had just 3 likes. 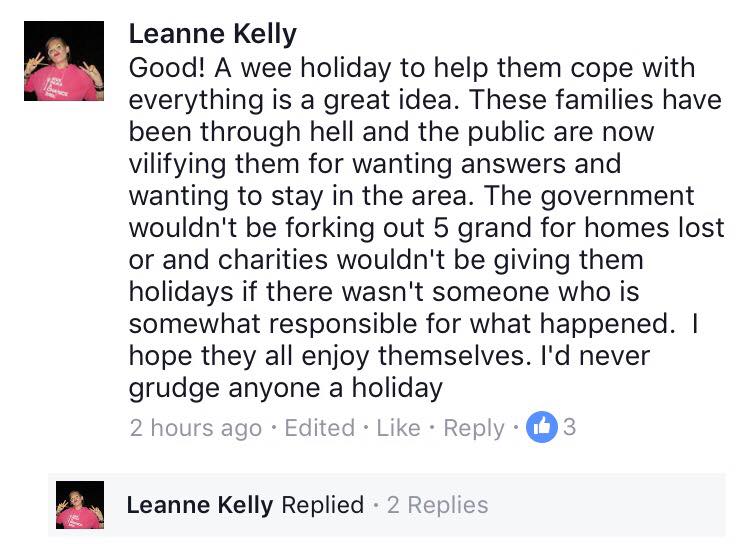 ‘Why should they live in the most expensive area of London?’

Unbelievably, some seem almost envious of the Grenfell survivors. The idea that these residents may not be rehoused locally, but instead in a more expensive property seems to spark outrage:

The expectation seems to be that the surviving residents should co-operate with the local gentrification and simply relocate, to avoid costing too much money. Is it not justified that those who have lost their homes through council negligence should be able to remain close to family and friends in the same area?

There appears to be a lot of bitterness aimed at the Grenfell survivors. People are acting resentfully at what they may receive in compensation for the awful disaster that they lived through.

‘They probably burned it down themselves to get better housing’

Shockingly, some even decided the Grenfell survivors had got suspiciously lucky with their new accommodation offers and suspected foul play:

That they can imagine burning babies to death for a new place doesn’t mean others did, just means they’re the sociopaths. #GrenfellTower pic.twitter.com/SLpDnrcwZ4

‘They should behave with more dignity’

Others unfavourably compared the attitudes of the Grenfell survivors to the survivors of the Manchester attacks, despite the significant difference between a terrorist attack and official negligence:

Almost as upsetting as the post itself is how many others liked the cruel comment compared to the person pointing out why the two situations were very different.

In the aftermath of the horrific tower fire, which is believed to have killed 80 people, the general public consensus was one of huge grief. After all, no matter which way you lean, the cause of the fire is unquestionably down to the failure of officials. Extremely vulnerable people were the victims of negligence from every angle.

However, in the face of long investigations that feel corrupt before they’ve even begun, some of the public seem to have run out of compassion. Instead of supporting the victims, many are now trying to vilify them.

Of course, when a country is in such a horrific state, a degree of anger is to be expected. Homelessness, food bank usage and benefit cuts are rife, and people are livid – but this is the fault of the governments – not the innocent people who will be haunted by their trauma for the rest of their lives.

With this lack of support, the trolls have gained the confidence to crawl from beneath their rocks to hurl their imbecilic, racist slurs.

And what’s even more worrying is that, from the amount of likes and upvotes these comments are now getting, this backwards attitude seems to be becoming more and more acceptable in modern day Tory Britain.

Your subscriptions go directly into paying our writers a standard fee for every article they produce. So if you want to help us stay truly independent,
please think about subscribing. We literally couldn’t function without the support of our fantastic readers.
Subscribe