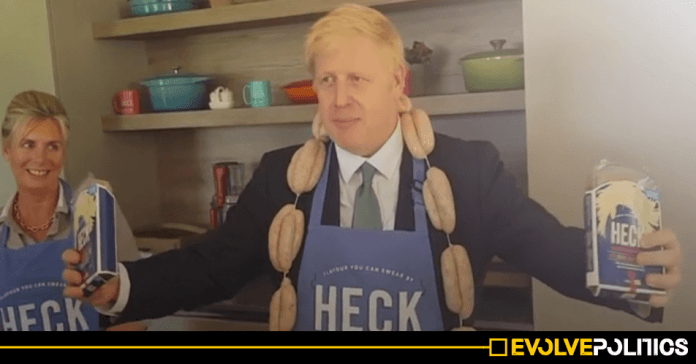 Sausage makers Heck Food are facing a nationwide boycott after a PR stunt with Boris Johnson – in which the Tory leadership hopeful was helped by Heck staff to create his own “Boris Banger” sausage in front of a hoarde of assembled photographers – backfired catastrophically, with huge swathes of social media users accusing the firm of political bias and vowing never to buy their products again under the hashtag #BoycottHeck.

On Thursday, Johnson took part in a PR stunt at the firm’s kitchens in Yorkshire to promote a new range of Heck sausages made in his honour – named the “Boris Banger”:

Tory leadership hopeful @BorisJohnson says he is "insanely proud" to have "Boris Bangers" made in his honour as he visits @HeckFood in North Yorkshire. pic.twitter.com/qKfjqbyv7W

Boris Johnson visiting Heck sausage factory in Yorkshire ahead of hustings tonight. They’ve named one after him #BorisBanger …Not sure about his sausage making skills pic.twitter.com/YbOtqxjXWx

The stunt came despite Heck’s co-owner, Debbie Keeble, declaring before the 2017 General Election that an end to Freedom of Movement – one of Boris Johnson’s key Brexit red lines – would be “cataclysmic” for her business.

Two years ago I dragged my sorry arse to Helmsley in north Yorks to listen to the owners of @HeckFood talk about how disasterous brexit would be for their business and to hear from heartbroken Eastern European employees https://t.co/qKgKVEj1Mg and now this. Pricks with forks etc. https://t.co/M9CrPvgeYj

Given Johnson’s divisive politics and highly controversial views, Heck’s endorsement of the Tory leadership hopeful created outrage, with many social media users accusing the Yorkshire firm of completely misjudging their customer base and some even predicting it could be the “kiss of death” for the company.

.@HeckFood why would you want a racist, homophobic liar promoting your food. You have lost customers big time #BoycottHeck #BorisJohnsonShouldNotBePM pic.twitter.com/EoR9MIvNm9

Following the backlash, Heck have now responded, attempting to claim that they did not “specifically endorse” Mr Johnson:

We’ve seen a lot of people talking about a visit to our factory last week, and we want to make ourselves completely understood. Team HECK x pic.twitter.com/ILx5iutunv

Heck’s claim comes despite them literally creating a sausage in Mr Johnson’s honour:

Now: "We do not specifically endorse any candidate…"

For full clarity, @HeckFood would like to make themselves 'completely understood'. They do not endorse any candidate. They just made a pack of product with Johnson's name on it, and then let him prance around their kitchen for the cameras. I trust everyone's clear on that. https://t.co/9vwaBFOeYA

And just when it looked like things couldn’t get worse for the Yorkshire firm, the hashtag #BoycottHeck is now trending at number 2 on Twitter – with huge numbers of social media users pledging never to buy their products again.

When you spend years creating a quality brand of sausages free from arseholes and bollocks, then ruin it all in one day #BoycottHeck pic.twitter.com/MPf3gR33of

You "do not specifically endorse any candidate" rings ridiculously hollow after creating 'Boris Bangers' packaging. This was a gushing photo op not an opportunity for debate. I bought your brand every week. I loved it. No more. #BoycottHeck

.@HeckFood why would you want a racist, homophobic liar promoting your food. You have lost customers big time #BoycottHeck #BorisJohnsonShouldNotBePM pic.twitter.com/EoR9MIvNm9

Well, what a PR disaster for @HeckFood.
Firstly, complain about the damage Brexit will have on jobs. Then moan about the EU pulling funds for a visitor centre because of Brexit. And then invite Boris to wear your sausages.
Bizarre thinking. Just odd. #BoycottHeck pic.twitter.com/ixlMzGP7hu

And the uproar hasn’t just been consigned to Twitter, with Heck’s Google review ranking also being severely hit after an influx of furious former customers leaving negative reviews.