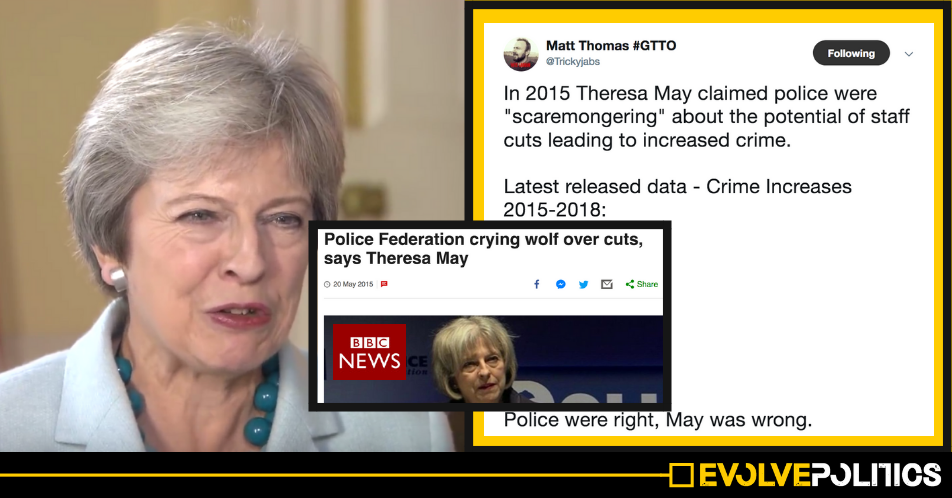 The Office for National statistics has just published the latest crime figures for England and Wales, and the numbers make grim reading for both Theresa May, and the country as a whole. Not only do they show an astounding rise since 2015, they also prove that the Prime Minister is either outrageously incompetent, or an absolutely shameless liar.

Three years ago, Theresa May was the Home Secretary. During this time she presided over swingeing cuts to police budgets.

Unsurprisingly, police were not happy with her proposed actions, and strongly warned her that taking such drastic measures would lead to an unprecedented rise in crime.

Theresa May’s response was to simply accuse police of ‘scaremongering’:

Despite the warnings, Theresa May pushed through with the measures. Overall, Tory austerity has now seen a staggering 21,000 police officers taken off Britain’s streets.

However, despite the logic seeming obvious, the Conservative Party have continually attempted to argue that falling police numbers would have absolutely no bearing on the amount of crime that occurs.

However, when crime inevitably started to rise, the Tories changed their argument to claim that there was no link between the rising crime rate and the huge drop in police numbers.

But, following the release of the latest crime figures, nobody can now be in any doubt just how catastrophic the Tories’ cuts have been to law and order in the United Kingdom.

On average, these serious crimes in England and Wales have risen by 47% in just three years. Even the most ardent Tory supporter would have to be pretty deluded to argue that the numbers are anything but a truly staggering failure on part of the Conservative government.

In 2015 Theresa May claimed police were "scaremongering" about the potential of staff cuts leading to increased crime.

Police were right, May was wrong.

Once again we see that public sector workers – this time the police – are the people we should be listening to, and not the politicians.

Austerity was a political choice, not a necessity. And the Tories decided to implement it for their own gain – to try and shrink the state so they could reduce taxes for the rich. But, in doing so, they have managed to transform Britain into a Brexit-bound wasteland.

As we will begin to see in the coming years and decades, it won’t be Brexit that solves any of our problems – it will be the act of finally kicking the Tories out of office and implementing a government who actually listen to ordinary people that finally does the trick. Mark these words.

[To view the latest ONS crime figures for England and Wales, you can download the PDF here.]