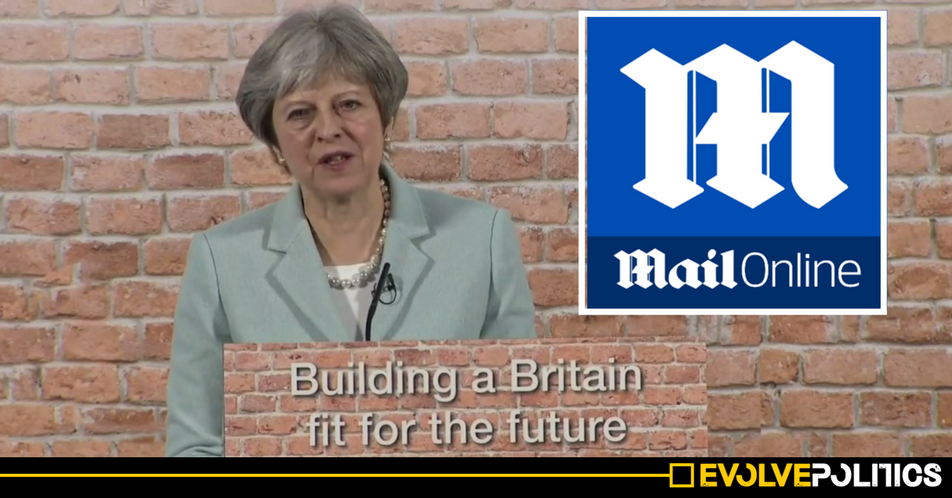 The Daily Mail isn’t exactly renowned for its love of socialism or equality, but when you contrast their reportage of today’s Tory housing pledge with their reporting on an identical pledge by the then Labour leader Ed Miliband in 2015, you will begin to understand that the paper is nothing but pure pro-Tory party-political propaganda.

Today the Prime Minister Theresa May pledged to increase the rate of house building in Britain in order to alleviate the housing crisis and ensure ordinary people see their rent and mortgage payments fall.

May promised to do this through a number of methods, the most notable of which was by threatening to crack down on property developers who buy up land and fail to develop it in order to simply sell it off at when the price inevitably increases – a money-making scheme known as ‘land-banking’.

The Daily Mail decided to report on this with a pretty straightforward article headlined:

‘Britain is NOT overcrowded’: PM insists tackling housing crisis doesn’t mean concreting over Green Belt as she vows to create new ‘garden towns’ and punish builders who ‘sit on’ land

Their article began with a pretty realistic depiction of Theresa May’s speech and the pledges that were contained within it, stating that:

Theresa May today insisted that Britain is not too ‘overcrowded’ for a massive housebuilding drive.

The Prime Minister rejected the idea that tackling the housing crisis meant concreting over the Green Belt as she admitted young people were ‘right to be angry’ about their inability to get on the property ladder.

In a package of measures aimed at restore the dwindling dream of home ownership, Mrs May confirmed plans to create up to five new ‘garden towns’.

And she vowed to crackdown on blocks to construction, such as developers ‘sitting on’ land and waiting for its value to rise.

The proposals came in an open pitch by Mrs May to the younger generation, seen to have turned against the Tories at the election.

The article then went on to include direct quotes from Theresa May’s speech, and due to the piece including absolutely no positive or negative comments either way, it could be considered a pretty accurate summation of the Prime Minister’s latest policy pledge.

However, Labour announced the same exact crackdown on land-banking in 2015. Care to take a guess how the Daily Mail reported it?

Yes, as they also like to do with Jeremy Corbyn on a regular basis, the Daily Mail attempted to paint Ed Miliband as a full-blown Communist for having the temerity to try and reign in the greed and selfishness of huge corporations.

And the brazenly hypocritical article began by asserting that:

Ed Miliband lurched further to the Left yesterday with a land grab to extend state control over the property market.

Property analysts said the move would take Britain back to the ‘dark days of the Seventies’.

Mr Miliband wants to bring in ‘use it or lose it’ powers allowing councils to encourage building by putting up taxes on undeveloped land.

Sites still left idle could be compulsorily purchased for use by another developer.

Yes, despite the ridiculous contrast in tones from the Daily Mail, Labour were pledging precisely the same thing as Theresa May did today in order to ensure property developers actually build houses on the land they have bought, rather than bank the land for a quick buck – a contrast summed up the the ever-brilliant DM Reporter on Twitter:

COMPARE AND CONTRAST: How the Daily Mail reports on the same house building policy, depending on if it’s a Labour idea or a Conservative idea pic.twitter.com/k0tosi6Unm

Proof if ever you needed it that the Daily Mail is, and always will be, a pro-Tory political propaganda rag.