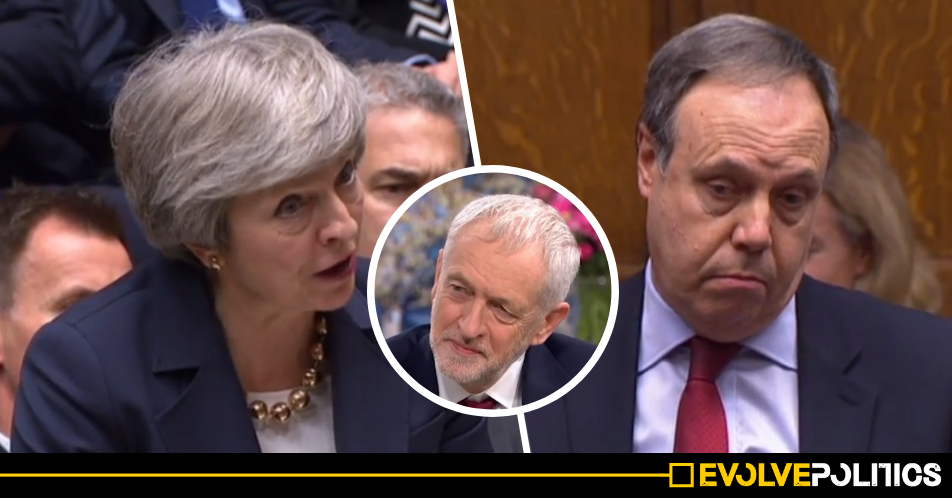 Jeremy Corbyn has been dealt a huge boost this evening after the Deputy leader of the Democratic Unionist Party (DUP) – the Northern Irish Party who currently prop up the Conservative minority government in Parliament – publicly declared that he would “happily” welcome another General Election.

During an intervention in response to Theresa May’s opening statement on the week-long debate in Parliament over her Brexit deal this evening, the DUP’s Deputy leader Nigel Dodds stated that in order to stop the Prime Minister’s Brexit deal his party would “happily” welcome a General Election, stating:

“We would happily go to the electorate and put our views to the people if needs be and I am quite certain that we would be returned in greater numbers than we are today.”

“A real shot across Theresa May’s bow: DUP Deputy Leader Nigel Dodds has just told the Commons he’d be happy for another General Election because he’s confident his party will be returned in “greater numbers”.”

A real shot across Theresa May’s bow: DUP Deputy Leader Nigel Dodds has just told the Commons he’d be happy for another General Election because he’s confident his party will be returned in “greater numbers”.

That Nigel Dodds quote in full as he warns Theresa May the DUP is well up for a general election.

"We will happily go to the electorate and put our views to the people if needs be and I am quite certain we would be returned in greater numbers than we are today."

DUP leader at Westminster Nigel Dodds may be preparing to vote against the govt in the motion of confidence likely to come next Wednesday, judging by his intervention on Mrs May

I’ve never understood why the DUP are called ‘loyalists.’ To whom or what have they ever been loyal?

The DUP are currently extremely unhappy with Theresa May’s proposed Brexit deal, stating that they believe it will effectively separate Northern Ireland from the rest of the United Kingdom.

As a result of their opposition to May’s Brexit deal, the DUP have rebelled by refusing to vote alongside the government as per their Confidence and Supply agreement – leaving the government effectively without a working majority to pass legislation in parliament.

The effective breakdown of this confidence and supply agreement means that the government would now struggle to win any vote of confidence, should one be brought.

If the government were to lose a vote of confidence, a General Election would almost certainly result – a situation which Jeremy Corbyn’s Labour Party have been openly pushing for to resolve the current Brexit impasse.

In the past few days, Labour sources have strongly indicated that they will be submitting a motion of no confidence against the government, which will be held if Theresa May’s Brexit deal does indeed get voted down next Tuesday.

And now, with the DUP seemingly happy to welcome the resultant General Election, Theresa May’s government will almost certainly not be able to rely on the DUP to vote to save them.

To say the Tories are currently living on borrowed time would be a huge understatement.