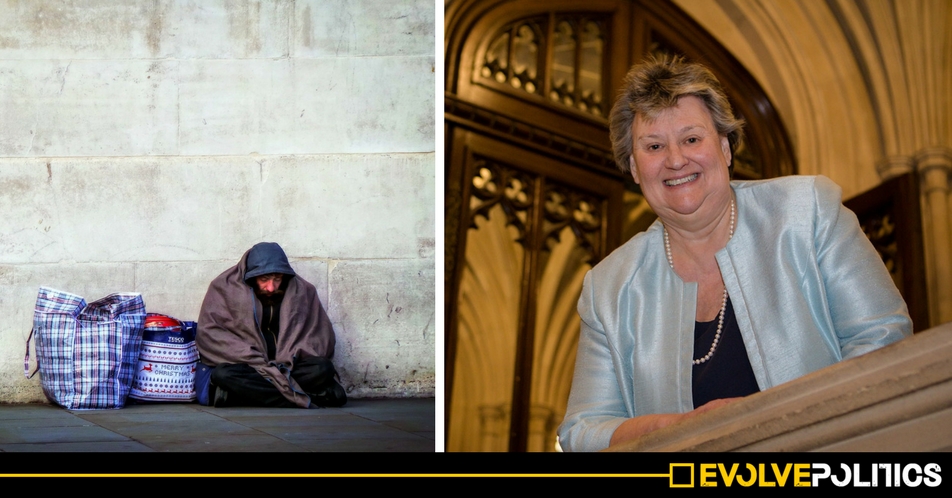 Two months after being appointed parliamentary under-secretary for housing and homelessness, Conservative MP for South Derbyshire Heather Wheeler is still scratching her head about the issue.

When asked in an interview with the Guardian why there has been a rise in rough sleeping, she said:

“In truth, I don’t know. That’s one of the interesting things for me to find out over the last eight weeks that I’ve been doing the job.“

Homelessness has increased every year since her party came to government in 2010. As to the cause, she might have considered asking one of the charities that works with homeless people. Here’s what Polly Neate, chief executive of Shelter has to say:

“On a daily basis, we speak to hundreds of people and families who are desperately trying to escape the devastating trap of homelessness. A trap that is tightening thanks to decades of failure to build enough affordable homes and the impact of welfare cuts.”

“The absolute shortage of genuinely affordable housing for low income households in large parts of the country continues to be intensified by welfare policy. The benefit cuts introduced in this decade, and those planned for coming years will cumulatively reduce the incomes of poor households in and out of work by some £25 billion a year by 2020/21. This is in a context where existing welfare cuts, economic trends and higher housing costs associated with the growth of private renting have already increased family poverty to record levels.“

But never mind those professionals. Wheeler has her own ideas. She suggests that one reason is people coming out of the army and having nowhere to live. Another reason may be leaving prison with no support. Or it could be immigrants that are the problem:

“We also have a real problem in London with people coming over [mainly from Europe] for jobs, sofa surfing with friends, and then the job changes and they have a problem.”

One thing it’s not, according to her interview with The Guardian, is ‘welfare reform and council cuts’.

“Given that housing associations are saying that over 80% of rent arrears are down to UC, and the Mayor of Greater Manchester is predicting rough sleeping will double as a result of the UC rollout, how many more families does the minister estimate will be made homeless this winter as a result of this Government’s refusal to pause UC rollout?”

In a recent survey, 84% of councils said that welfare reforms had made it harder for them to tackle homelessness. The situation is exacerbated by huge cuts to local authority budgets, which impact directly on the services they can provide for rough sleepers. And it can only get worse, as council budgets are due to be cut by a further 50% over the next two years.

And what about those immigrants that Wheeler would like to blame for being homeless? According to the report by Crisis [pdf p10]:

So we can’t blame them, then. But whatever the cause, nobody should say that Wheeler is not compassionate towards homeless people, as she likes to demonstrate:

Dreadful news of a suspected rough sleeper dying in Westminster Tube. Stories like this push me on to find solutions and work to eradicate Rough Sleeping for good.

But it’s hard to take Wheeler’s compassion seriously, when she has chosen to represent a party whose policies have had such a devastating impact on the most vulnerable people in society.

Ultimately, it’s easier for Wheeler to blame the rise in rough sleeping on sofa-surfing immigrants than the brutal policies of her party. But, compassionate or not, she may not be in the job for long. She was asked in a recent BBC interview how she’d feel if rough sleeping got worse on her watch. She replied [06:50]:

Perhaps she’s banking on the immigrant rough sleepers going home because of Brexit. But in reality, there’s every sign that rough sleeping will continue to rise. Heather Wheeler may be looking for a new job sooner than she expected.