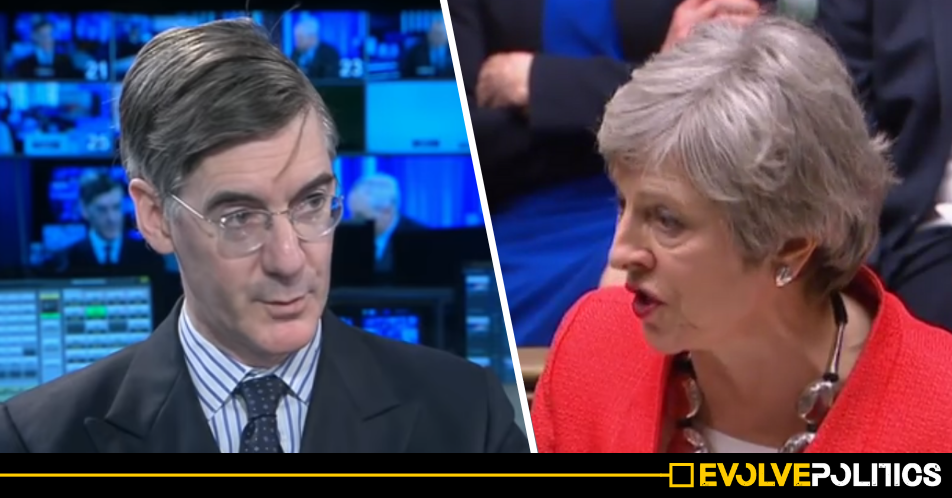 The leader of the hard-Brexit supporting European Research Group (ERG) consisting of around 80 Tory MPs, Jacob Rees-Mogg, has strongly signalled that he will perform an extraordinary u-turn to support Theresa May’s Brexit withdrawal bill in any potential third meaningful vote.

Accompanied by a link to his latest Podcast, entitled The MoggCast, Rees-Mogg stated that he now believed “The choice seems to be Mrs May’s deal or no Brexit.“

The choice seems to be Mrs May’s deal or no Brexit.https://t.co/GggHZ7NEv5

Furthermore, during the podcast Rees-Mogg also states that he now believes “[Theresa] May’s deal is better than not leaving at all” and is “definitely not” worse than Remain.

Mogg’s latest comments come in stark contrast to his own statements, previously labelling Mrs May’s deal as a “worse situation than we’re currently in” and even that it would make the UK a “slave state“.

Liar. You're simply a liar. No shame. Just straight up lying to the British people.
You already admitted that the Brexit deal is worse than Membership because it means we have less sovereignty than EU members. You're now arguing to turn us into what YOU called a SLAVE STATE! pic.twitter.com/M3v55WlrZr

Unsurprisingly, Rees-Mogg immediately faced a fierce backlash from fellow hard-Brexit supporters, with Leave.EU replying to his tweet by quoting many of his previous denouncements of Mrs May’s deal:

Hi @Jacob_Rees_Mogg, a reminder of what you've said:

✅ "Slave state"
✅ "Divides our country"
✅ "Doesn't commit on manifesto"
✅ "Locked in Customs Union"
✅ "Allowing ECJ to continue"
✅ "Paying £39bn for a vacuous political statement that could mean anything to anybody" pic.twitter.com/WsaLGu1aCl

But now, in light of Rees-Mogg’s apparent u-turn on supporting Mrs May’s deal, the Prime Minister may well attempt to bring back her Brexit withdrawal bill for a third meaningful vote in the coming days.

Despite the ERG being apparently poised to support it, Mrs May still faces numerous obstacles in her way.

Firstly, the Speaker of the House of Commons, John Bercow, has previously indicated that he will not allow Mrs May to bring her deal back before the house unless “substantial changes” are made to it.

Secondly, following a meeting between Theresa May and Arlene Foster yesterday, it remains the case the Tories’ confidence and supply partners, the DUP, are still vehemently opposed to the deal – stating that, despite the prospect of Brexit being delayed and MPs wrestling back control of Brexit from the executive, their opposition remains unchanged.

Were the entire ERG to support Mrs May’s deal, it would significantly increase the number of votes in favour – but, without the support of the DUP, and with a significant portion of Tory Remainers also still opposed, the chances of the Prime Minister getting her deal through would still appear slim.