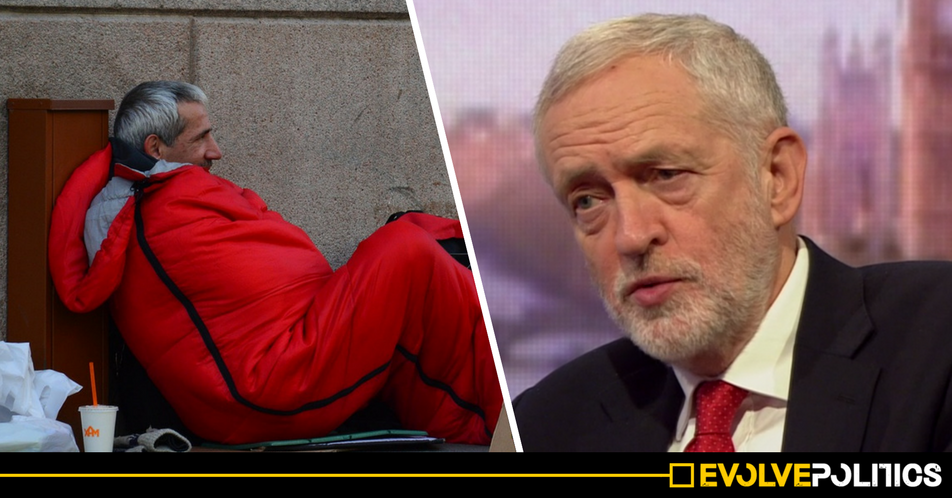 Labour’s first act as a ruling government would be to eradicate rough sleeping entirely by buying properties to house every single person currently sleeping on the streets of Britain.

Labour leader Jeremy Corbyn promised that, should his party be elected to government, they would ‘immediately purchase 8,000 properties’ to ensure nobody in Britain was without a roof over their head.

Speaking on the Andrew Marr show this morning, Corbyn said:

[We would] immediately purchase 8,000 properties across the country to give immediate housing to those people that are currently homeless.

And at the same time require local authorities to build far more.

The problem is homeless people, rough sleepers, beg to get money for a night shelter, stay in the night shelter or a hostel.

The Labour leader also went on to slam wealthy investors who simply buy properties and leave them empty, and announced plans to give local councils powers to make use of properties that have been deliberately left empty by owners.

We would give local authorities the power to take over deliberately kept empty properties.

Because there’s something grossly insulting about the idea that you’d build some luxury block and deliberately keep it empty knowing that with the property price inflation, the investor is going to make 10-12% a year on it.

Surely we have to have a social objective and a social priority in our society.

Rough sleeping has more than doubled since the Conservatives came to power in 2010, whilst the number of children left without a home has also skyrocketed by 73% in the same period under the Tories.

Also speaking on the Andrew Marr show, The Conservative Minister for the Cabinet Office, David Lidington, dodged several questions on the Tories’ atrocious record on homelessness.

Over the last five years, rough sleeping in this country has doubled. In the borough I live in it has gone up 670%. Why?

A particularly shifty looking Lidington replied saying that rough sleeping has gone up “for a number of different reasons”, citing the ‘complexity of the people who often end up sleeping rough”.

And ignoring every single Tory policy that has so obviously directly led to the dramatic surge in rough sleeping – such as failing to build anywhere near enough houses to ensure rents and house prices remain extortionately high, slashing benefits for disabled people, eliminating housing benefit for under 25s, capping benefits for families with more than 2 children, and implementing swingeing cuts to NHS mental health provisions (amongst a torrent of other socially destructive policies that directly impact on people’s security and health), Lidington completely refused to accept that his parties’ policies may in any way have led to the crisis.

And, after completely ignoring the utterly damning evidence, Lidington ridiculously declared that the Tories had ‘set a very ambitious target to half rough sleeping by 2022’.

Should they actually manage to achieve this target, all they will have managed to do is simply undo the damage they have caused since 2010. Undoing their own damage, according to Lidington, is ‘very ambitious’.

When you compare the Tories’ stance on rough sleeping to that of Corbyn’s, it is ridiculously obvious to see that only one of them is actually going to do anything about it.

In his disastrous defence of his own parties’ despicable record, Lidington is simply trying to con the public into believing that solving the problem of rough sleeping is somehow ‘complex’.

But then when you listen to Corbyn’s plan, you realise just how simple it actually is.