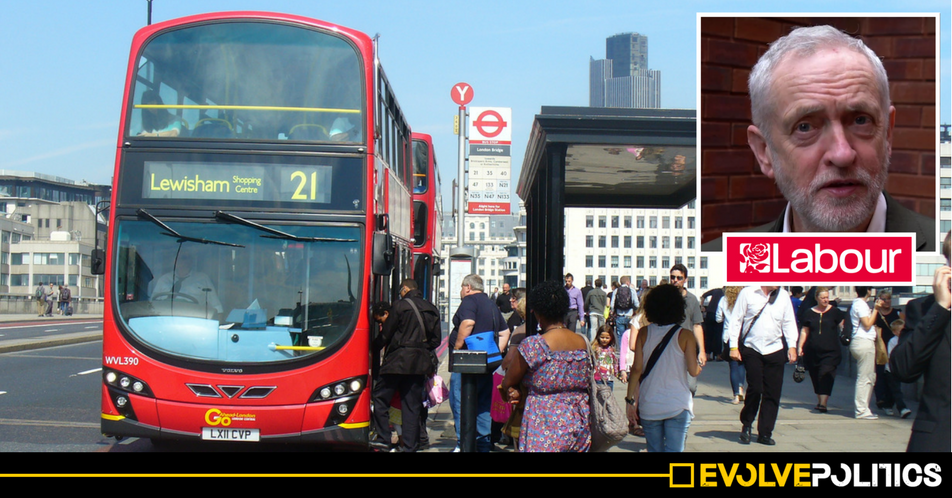 Labour leader Jeremy Corbyn is set to announce that the party would implement a new scheme providing free bus travel for all under 25s, should Labour win the next General Election.

Labour say that the move to provide free bus travel for every citizen under 25 could benefit up to 13 million young people across the country and help them save up to £1,000 a year on public transport costs.

Labour say that the scheme would cost £1.4Bn per year, and that the party plan to pay for it by using money ring-fenced from Vehicle Excise Duty.

The scheme would involve the next Labour government providing funds to local authorities who introduce bus franchising, or who take their local bus services back under public control. Labour say this would incentivise local authorities to create bus companies that are publicly run for passengers rather than for profit, which, according to research conducted by Transport for Quality of Life, could save the taxpayer £276m a year.

Launching the policy at a visit to a sixth form in Derby on Thursday, Jeremy Corbyn is expected to say:

“Young people deserve a break. Nearly eight years of Tory austerity have hit their incomes, their chance to buy a house and their career opportunities.Labour wants to help young people make the most out of life by investing in them, which is why today we are pledging the next Labour government will provide the funds to cover free bus travel for under 25s, to support them to travel to work, to study and to visit friends.

Our policy provides help where it is most needed. On average, children, young people and households with children each have less disposable income than working age households without children. Young people also tend to be in lower paid, more insecure work, and they spend a higher proportion of their income on travel. Giving them free bus travel will make a huge difference to their lives.”

“Buses are vital for easing road congestion and air pollution, but for too long, private bus companies have run our services for profit not people. The public purse already pays 42% of the costs of providing local bus services, but deregulated private companies choose to run only the profitable services and leave councils to plug the gaps left for non-profitable but vital routes.

That’s why we’ll encourage local authorities to take back control of their buses so they can provide a better and more sustainable service to young and old alike, wherever they live.”

The new pledge from Labour is expected to go down extremely well with young people, with recent statistics showing 17-21 year olds make almost double the amount of bus journeys than most other age groups.