Home Mainstream Media Bias Jewish people have a completely different opinion about Jewdas to the one... 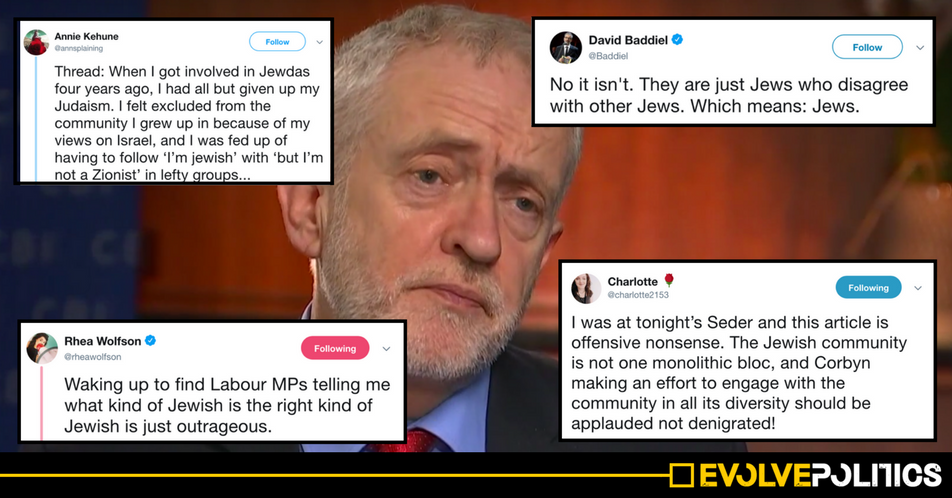 As you’ve probably seen by now, Labour leader Jeremy Corbyn is being castigated by all angles of the Establishment for attending an event marking Passover Seder with a group of left-wing Jews called Jewdas, who the media and right-wing Labour MPs are claiming hold ‘extreme’ views, and strongly implying that they are anti-Semitic.

However, the quality of reporting of Corbyn’s attendance at the event has been described as shocking, with the BBC in particular coming in for heavy criticism for failing to report anywhere near both sides of the argument.

Whilst Sky News reported the fact that the group Corbyn attended Seder with were comprised entirely of left-wing Jews from his constituency in Islington, the BBC’s report left this part entirely ambiguous.

Furthermore, whilst Sky News included opinions that were both critical and supportive of Jeremy Corbyn attending an event with left-wing Jews, the BBC piece only contained negative views and even managed to completely miss out a statement from Mr Corbyn’s spokesperson which confirmed that the members of the group were Jewish.

Guido Fawkes initially reported the event, and in a tweet they also reported that the group “called for the destruction of Israel, dismissed the Labour anti-Semitism scandal as a “cynical manipulation” and labelled Corbyn’s Jewish critics “non-Jews”.

However Jewish members who actually attended the event with Mr Corbyn tell a completely different story about the group – stories which the mainstream media are refusing to publish, presumably because they completely obliterate the narative they’re attempting to convey.

One member of Jewdas, Charlotte, tweeted that:

“I was at tonight’s Seder and this article [Guido Fawkes’ article] is offensive nonsense. The Jewish community is not one monolithic bloc, and Corbyn making an effort to engage with the community in all its diversity should be applauded not denigrated!”

Before going on to state that:

“Jeremy Corbyn participated fully in a Seder tonight that was over four hours long- completely engaged from start to end, including leading the blessing for Elijah’s cup. He was a welcome INVITED GUEST, how dare anyone try to spoil what was a really lovely evening.

Whilst another member who attended wrote an exceptionally inspiring 8-tweet thread explaining how before finding the group they felt excluded from their community because of their views on Israel, and had “all but given up my Judaism“.

“Thread: When I got involved in Jewdas four years ago, I had all but given up my Judaism. I felt excluded from the community I grew up in because of my views on Israel, and I was fed up of having to follow ‘I’m jewish’ with ‘but I’m not a Zionist’ in lefty groups…

…I could never stop being a Jew, it’s not a choice for me, but it was becoming something private and very different from the collective experience I’ve always cherished …

…with @geoffreyjewdas I and so many others have found a home. Believe it or not, our outlandish build-it-ourselves Judaism is as meaningful as it is hilarious. Through this community I have felt more in touch with and proud of my Jewishness than ever before …

...I’m learning yiddish, working my tucchus off researching Jewish history, I’ve just been accepted onto an MA in Holocaust studies and I’m about to start training as a Jewish priestess…

..Pesach is like Christmas for left wing Jews and @geoffreyjewdas organise the best Seders. We’re like that person in the street whose house looks like it’s made of fairy lights. Excuse the left wing analogy)…

.. I actually think it’s pretty great of him to show up to an event hosted by a group who have literally written pamphlets about antisemitism on the left. Maybe he wanted to make a gesture, maybe he just wanted to eat some food and sing some yiddish songs with us …

..either way, he was a lovely guest and even brought us some maror from his allotment for our Seder plate. For everyone using this to slate him and Jewdas, consider that you are politically attacking a group of commited Jews on one of the most important festivals of our year”

However, the views of these Jewish members will make uncomfortable reading for two non-Jewish Labour MPs who jumped at the chance to condemn Jeremy Corbyn on Twitter and imply that the Jewish group he met were anti-Semitic.

“This is deliberately baiting the mainstream Jewish community days after they pleaded with him to tackle antisemitism. And he must know that meeting them now will give his members the message that the group’s extreme views are ok. Irresponsible and dangerous”

It was an incredibly telling tweet from Woodcock which specifically indicated that he only has respect for the views of the ‘mainstream Jewish community“, and therefore presumably considers any opposing views from other Jewish people – such as the slightly more nuanced and objective views many Jewdas members hold about Israel –  essentially obsolete.

“Corbyn’s attendance at the Jewdas seber (sic) reads as a blatant dismissal of the case made for tackling anti-Semitism in Labour.”

A tweet which strongly hinted that the non-Jewish Labour MP believed that the views held by the Jewish members of Jewdas are in fact anti-Semitic.

After reading the tweets from non-Jewish Labour MPs, Labour NEC Rep Rhea Wolfson, who is Jewish, aired her views in no uncertain terms, tweeting that:

However, one non-Jewish political commentator went even further than the Labour MPs, branding the group of left-wing Jews a ‘Jew hating group’.

LBC Presenter Andrew Pierce didn’t have the guts to keep his tweet however – swiftly deleting it, but not before someone was able to screenshot it:

Care to explain yourself, Andrew? pic.twitter.com/TRlpLh59YL

All this goes to clearly show is that the pro-establishment media are unflinchingly intent on only providing the general public with only a single unified narrative here – that the group Corbyn met were evil, and that Corbyn and the entire left are raging anti-Semites.

The fact that numerous high-profile Jews including David Baddiel, Michael Rosen, David Schneider and Michael Segalov have all tweeted their support for the group’s Jewish members, shows that the media’s refusal to properly report both sides of Jewish opinion on the issue – included literal members of the group – is clearly indicative of a wider anti-Corbyn, anti left-wing agenda within the British media.