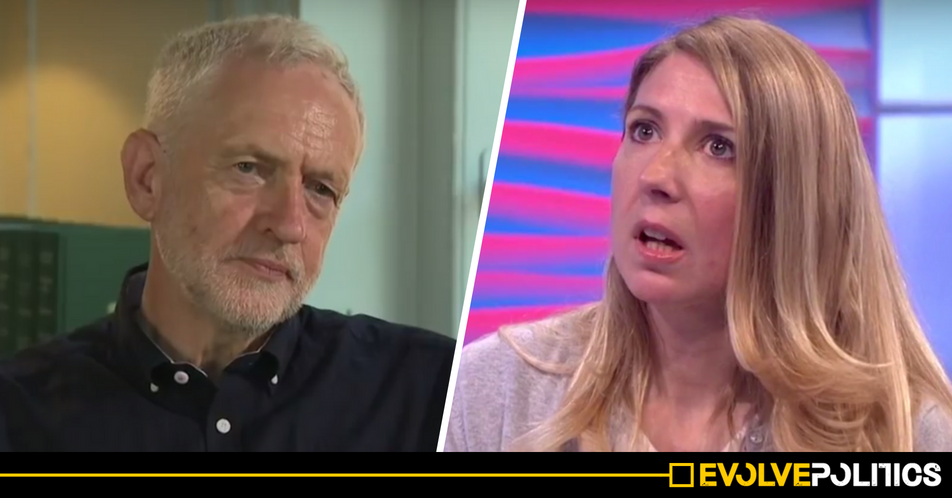 The journalist who penned an emotional and widely publicised article explaining that she was leaving the Labour Party with a “very heavy heart” because she could not ‘tolerate antisemitism‘ anymore, only actually joined the party in 2016 with the sole intention of voting against Jeremy Corbyn.

Telegraph columnist Jane Merrick claimed in her article [paywall] that she has been a lifelong Labour voter and that the past few weeks had been agony as a Labour member.

With a very heavy heart… https://t.co/ObU2f2DKcH

However, following Merrick’s emotional article gaining significant coverage across a large section of the mainstream media as part of yet more wall-to-wall coverage of Labour antisemitism, it has now emerged that before her highly publicised departure on Friday, Merrick had only actually been a member of the party for a mere two years.

Furthermore, Merrick penned another highly-publicised article at the time she joined the party explaining that she had only decided to join in order to vote against Jeremy Corbyn in a leadership election.

Tellingly, her 2016 article does not mention any of Corbyn’s policies that she actually disagrees with, instead citing both the ‘poison of the hard-Left‘ as well as wrongly predicting Corbyn would be an ‘electoral disaster‘ as her two main reasons for wanting to join the party to install a replacement.

However, following Merrick’s latest claim on Friday that it was with a ‘very heavy heart‘ she had finally decided to leave the Labour Party, her past words have unsurprisingly come back to haunt her.

Journalist and prominent Jewish activist, Michael Segalov, was one of the first to confront Merrick over her conflicting claims, writing a long and impassioned thread on Twitter to the right-wing journalist, stating:

“hi @janemerrick23 I noticed today you wrote in The Times that you’ve left the Labour Party because else you’d be tolerating anti-Semitism. I find that offensive, being both Jewish and a Labour member. but, could I just check, are you actually a member?

…only, the thing is, it says in ur Times piece that you “have made no secret of my concern at Corbyn’s politics since he became leader nearly three years ago.” except less than three years ago you said you weren’t a member of any party. so when did you join? and may I ask why?

[…] did you join Labour because you wanted to try and campaign in an anti-Corbyn direction? that’s legit, obvz, just I think that context is important when you say you’re now leaving. or did you join recently just so you could leave?

or were you never a member? or was that tweet back in 2016 a lie? could you plz clear up? just speaking for myself here, but I’m a little confused.  I’m one of many Jewish Lab members trying to fight anti-Semitism in Labour // beyond. I’m not 100% sure what ur doing here?

Following Segalov’s polite questioning, Merrick’s 2016 article then surfaced, leading to a flurry of legitimate questions being asked of her true agenda for both joining and leaving the party in a highly public manner:

It gets better. Jane Merrick joined Labour in Summer 2016 to vote for…

Following being called out, Merrick then took to Twitter to accuse the nasty people asking legitimate questions of her motives as attacking her, stating:

“The state of some Corbyn supporters trawling through old tweets to personally attack me about my piece today. That’s easier for them than facing up to why people are leaving. If all you have is personal attack…”

The state of some Corbyn supporters trawling through old tweets to personally attack me about my piece today. That’s easier for them than facing up to why people are leaving. If all you have is personal attack…

Following Merrick’s refusal to address any of the legitimate questions posed of her, one Twitter user provided an utterly perfect retort, hilariously quipping that:

“My lies are being repeated back to me. This is abuse.”

Merrick’s reasoning for joining Labour in 2016 was made perfectly clear in her 2016 article – she didn’t like Jeremy Corbyn being leader and she didn’t like the left-wing being in control of what is a left-wing party.

However, Merrick’s failure to cite any of Corbyn’s policies that she actually disagrees with, coupled with the highly publicised manner in which she decided to dramatically enter and now exit from the party has, not unreasonably, led to many people questioning her true motives for doing so.

What is clear, however, is that the real horror of racism is being shamelessly used as a political football by those who have no actual desire to stamp it out, in a disgusting attempt to score political points against those they disagree with politically.

Jeremy Corbyn has – for no other reason than it is the right thing to do – spent his entire life fighting against all forms of racism, and those wrongly accusing him of supposedly condoning it are completely undermining the real fight against it for their own disgusting political gain.