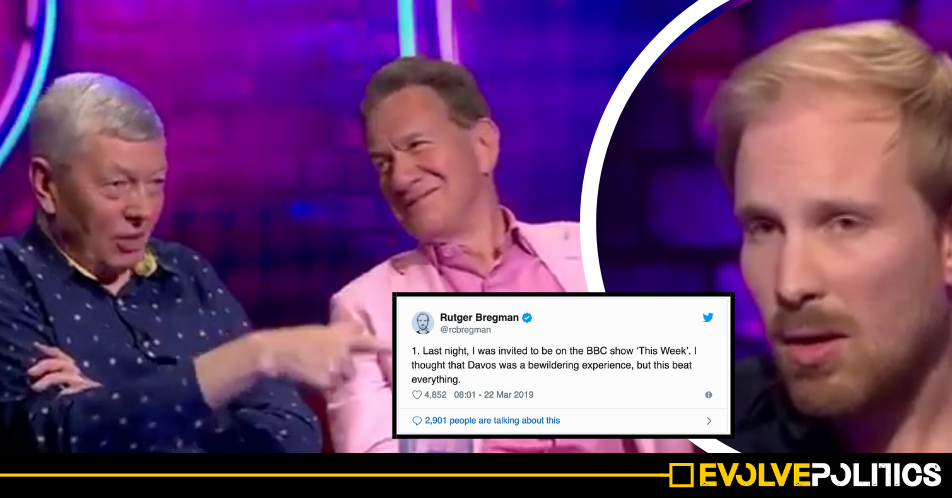 The Dutch left-wing Historian, Rutger Bregman – who became a worldwide sensation after a video of him savaging the elites in Davos by telling them to pay their taxes went viral in January – has delivered a truly devastating account of his experience appearing on the BBC political show hosted by Andrew Neil, This Week, on Thursday evening.

In an astonishing exposé of the BBC’s underhand behaviour, Bregman slammed the show as “incredibly stupid” and its guests and presenter as “right-wing dinosaurs”, before essentially claiming that the producers had invited him on to the show under false pretences.

The left-wing historian also slammed the programme by accusing two of its regular guests – former Tory MP Michael Portillo and ex-Labour MP Alan Johnson – of simply making up facts to challenge him, changing the subject every 10 seconds, and constantly interrupting him so he couldn’t get his ideas across.

Bregman’s truly devastating account of his experience on BBC This Week, tweeted to his almost 300k Twitter followers, stated:

“1. Last night, I was invited to be on the BBC show ‘This Week’. I thought that Davos was a bewildering experience, but this beat everything.

2. A bit more background on how incredibly stupid the show really is. First they invite you to talk about your book, and pretend to be really interested in your ideas.

4. Producer: ‘Yes, we want to get into that. But what do you think about Brexit?’ A couple of hours before the show, they want you to do a video of 2 minutes in which you have to summarise all your ideas. (‘And can you say something about Brexit please?’).

5. When you arrive at the studio, you quickly find out that nobody has actually read your book. The producer, the presenter – they all couldn’t care less. They don’t even have a copy.

6. The show starts. They play the badly edited video, after which three right-wing dinosaurs – two of them politicians from the Stone Age – start teaming up on you. Clearly, not one of them has read a page of your book.

7. They make up facts about inequality (‘hasn’t grown’) and the economy (‘never been better’). They change the subject every 10 seconds. They hardly let you finish a sentence. Then it’s over.

8. This was the worst experience I’ve had with UK media, but after quite a few interviews in different countries, I think I can say that, on average, British journalists are the least curious of all. So often, being ‘critical’ is just a pose.

10. The good news: there are new media in the UK filling the gap. Smartest questions (and best criticisms) I got this week were from Aaron Bastani of @novaramedia – a tiny startup with really smart, young journalists. https://www.youtube.com/watch?v=PSzhg0bJnLo&t=527s … [the end]

11. And to clarify – I think my politics are quite different from those of @novaramedia. I’m not a fan of Corbyn, absolutely don’t identify as a ‘communist’ (trying to save capitalism instead…) etc. But they actually read the book, can’t say that of many other UK journalists.”

1. Last night, I was invited to be on the BBC show ‘This Week’. I thought that Davos was a bewildering experience, but this beat everything.

If you want to check out just how accurate Bregman’s account of the situation really was, you can watch his appearance on BBC This Week in full below:

Given that the BBC is currently under investigation by Ofcom in relation its declining standards of impartiality, Bregman’s truly shocking account of his treatment at the hands of Britain’s once highly respected public broadcaster will surely do nothing to quell fears that it is slowly becoming nothing more than a Putin-esque propaganda service for the Establishment.