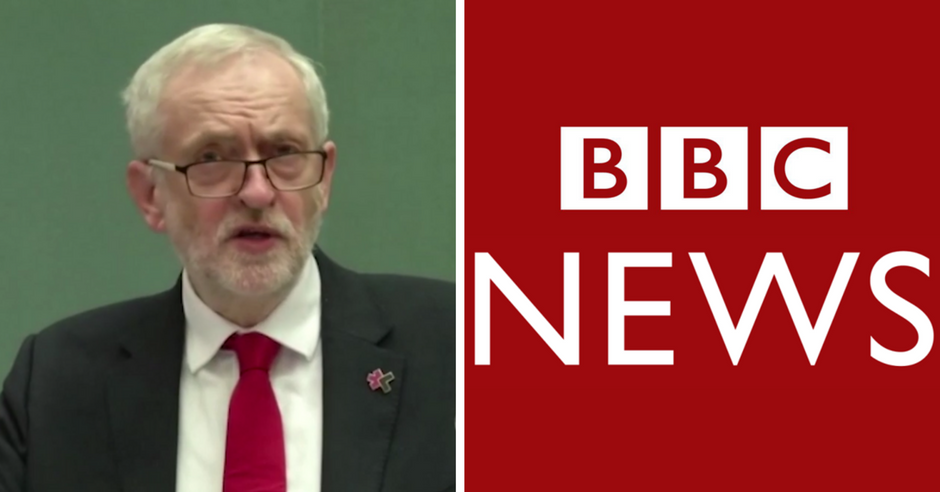 As the majority of the British mainstream media disingenuously fawns over Theresa May’s pitiful capitulation to the European Union’s Brexit demands, there has been an incredibly conspicuous radio silence regarding Jeremy Corbyn’s latest achievement.

On Friday, after his landmark speech in Geneva, Labour leader Jeremy Corbyn was awarded with a highly prestigious International peace prize. But you certainly wouldn’t know it from looking at the mainstream media.

Along with political activist and historian Noam Chomsky, Corbyn was handed the Sean McBride Peace Prize – a prestigious award dedicated to the memory of peace campaigner Sean MacBride, a Nobel Peace Prize winner in 1974.

Corbyn was handed the prestigious award for his ‘sustained and powerful political work for disarmament and peace’, and, unlike almost all other mainstream Western politicians, for looking for ‘alternatives to war’.

The full press release from the International Peace Bureau reads:

Jeremy Corbyn – for his sustained and powerful political work for disarmament and peace. As an active member, vice-chair and now vice-president of the Campaign for Nuclear Disarmament in the UK he has for many years worked to further the political message of nuclear disarmament. As the past chair of the Stop the War Campaign in the UK he has worked for peace and alternatives to war. As a member of parliament in the UK he has, for 34 years continually taken that work for justice, peace and disarmament to the political arena both in and outside of Parliament. He has ceaselessly stood by the principles, which he has held for so long, to ensure true security and well-being for all – for his constituents, for the citizens of the UK and for the people of the world. Now, as leader of the Labour Party and Leader of the Opposition he continues to carry his personal principles into his political life – stating openly that he could not press the nuclear button and arguing strongly for a re-orientation of priorities – to cut military spending and spend instead on health, welfare and education.

As well as winning the Nobel Peace Prize, the namesake of the award, Sean MacBride, was a founding member of Amnesty International, a hugely successful charity set up by ‘ordinary people from across the world standing up for humanity and human rights.’

Despite the significance of such an award being handed to a mainstream British politician, the only outlets to report the story were The Skwawkbox and Vox Political. Had Theresa May or any other establishment lackey been awarded with a prestigious International Peace Award, can you seriously imagine the entire media would ignore it?

Of course they wouldn’t. It would be plastered all over the news. And everyone knows it.

However, as we saw in the lead up to all of our recent disastrous military interventions, the British media, rather than holding power to account, acts as a sort of post-colonial establishment cheerleader – desperately and disgustingly baying for foreign blood at whatever cost.

War gives such publications the emotive headlines they require for people to continue buying them, and world peace certainly wouldn’t be considered a money spinner for the future.

Combined with the fact that the current financial and political status quo only genuinely benefits the already super-rich owners of such media outlets, it is little wonder that there has been absolutely no coverage in the media of Corbyn’s award for peace campaigning.

You can put pressure on the mainstream media to report Corbyn’s achievement by sharing this article.