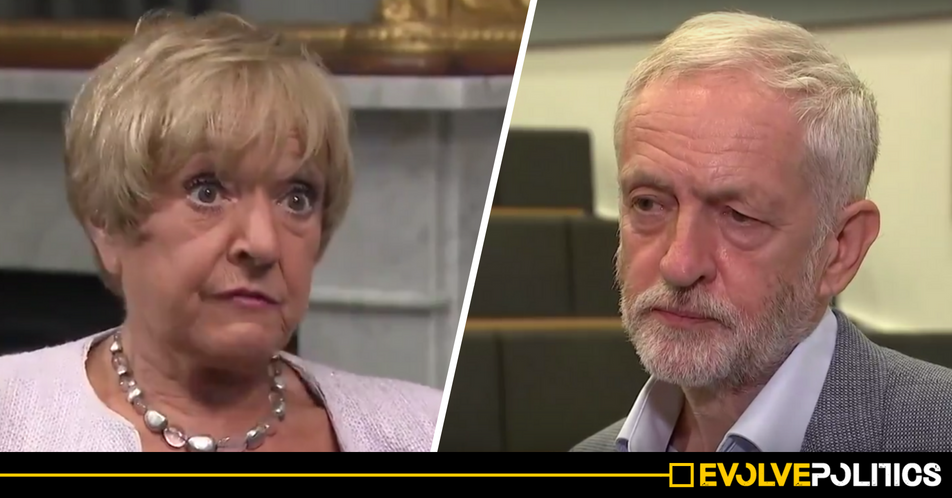 The Jewish Labour MP who faced disciplinary action by the party after reportedly screaming in Labour leader Jeremy Corbyn’s face and calling him a “f*cking antisemite” has faced a widespread backlash from all sides, including many in the Jewish community, after comparing her treatment by the Labour Party to Nazi Germany.

Despite the Labour Party dropping any disciplinary action against her more than a week ago, Dame Margaret Hodge reportedly told Sky News in an a interview this evening that she ‘felt the same fear her father would have felt when he was fleeing Nazi Germany when she found out Labour had opened disciplinary proceedings against her’.

“On the day that I heard that they were going to discipline me, and possibly suspend me, it felt almost like – I kept thinking, ‘what did it feel like to be a Jew in German in the 30s’.

Because it felt almost as if they were coming for me. And it’s rather difficult to define, but there’s that fear, and it reminded me of what my dad used to say. He always said to me as a child ‘you’ve got to keep a packed suitcase at the door, Margaret – in case you ever have to leave in a hurry’.

And when I heard about the disciplinary, my emotional response resonated with that feeling of fear that was clearly at the heart of what my father felt when he came to Britain.”

Hodge’s father, Hans Oppenheimer, fled Nazi Germany during the late 1930s, narrowly avoiding the start of the Holocaust in which six million Jews and hundreds of thousands of other minorities such as Romany Gypsies and LGBT people were murdered.

Unsurprisingly, Hodge’s astonishing comparison between Labour’s disciplinary process and her father fleeing the Holocaust came in for fierce criticism.

A Labour spokesman reportedly responded by saying the comparison was “extreme and disconnected from reality“.

The Jewish Comedian has made no secret of his criticism for Jeremy Corbyn’s handling of the Labour antisemitism row, but chose to slam Hodge’s stark comparison between Labour’s disciplinary proceedings and fleeing the Holocaust as “bollocks“:

Well. That I'm afraid – and I speak both as someone who is not a fan of the cult of Jeremy, and whose mother fled Nazi Germany – is bollocks. https://t.co/IdaMB5s5Oj

My grandmother fled the Nazis in 1938 and got out by the skin of her teeth, her brother had an even closer escape, their father and half their extended family never made it.

This analogy is so utterly offensive it’s hard to express how disgusted I am https://t.co/ZC0BrdkJy2

In fact, Hodge’s comments came in for near universal condemnation on Twitter, with many pointing out that if the general public didn’t think the antisemitism row was being used for political gain before, Hodge’s extremely exaggerated hyperbole would understandably lead many to believe it was now:

Here we have Margaret Hodge comparing a Labour Party disciplinary hearing to being chased out of Nazi Germany by the Gestapo. What a ludicrously appalling and disingenuous statement to make. Have you absolutely no shame? https://t.co/byfZZH0Nsx

The insensitivity and hysteria inherent in Hodge’s comparison was highlighted by another Twitter user, who posted a 2015 quote from Jewish journalist Anshel Pfeffer which perfectly highlighted the glaring difference:

“If they honestly think that the situation in Britain today echoes the 1930s when Jews were still banned from a wide variety of clubs and associations, when a popular fascist party, supported by members of the nobility and popular newspapers, were marching in support of Hitler, when large parts of the British establishment were appeasing Nazi Germany and the government was resolutely opposed to allowing Jewish refugees of Nazism in to Britain, finally relenting in 1938 to allow 10,000 children to arrive — but not their parents who were to die in the Holocaust (that shameful aspect of the Kindertransport that is seldom mentioned) — and when the situation of Jews in other European countries at the time was so much worse, then not only are they woefully ignorant of recent Jewish history but have little concept of what real anti-Semitism is beyond the type they see online.

[…] To compare today’s Britain, for all its faults, with the Jews’ situation in 1930s exhibits a disconnect from reality which borders on hysteria.”

Also during her interview with Sky News, Margaret Hodge stated that she believed there was a fine line between being pro-Palestinian and being antisemitic, stating:

“There’s a very fine line between being pro-Palestinian – the Palestinian cause, which [Corbyn has] always believed in – and being antisemitic. And I think he’s gone the wrong side of that line.”

Hodge’s comment that there was a fine line between the two also came in for criticism from many, including the prominent Jewish pro-Corbyn activist Michael Segalov:

this is complete nonsense from Margaret Hodge. it is not a 'fine line' between fighting anti-Semitism and supporting Palestinian people in their struggle. you can do both just fine. to suggest anything otherwise is dangerous and disingenuous. ugh. (fixed) pic.twitter.com/Dbq62hjV8h

'Fine line'? Sorry, this is an outrageous statement by Margaret Hodge. Outrageous on so many levels. Let's please tackle anti-Semitism on the left without throwing Palestinians, or their supporters on the left, under the bus please. FFS. https://t.co/R2si1Wdm1s

Being in favour of Palestinians having rights has nothing to do with being antisemitic. This is dangerous nonsense pic.twitter.com/UfR3fBFDxJ

It remains to be seen whether or not those within the Labour Party who have previously supported Hodge will change their stance and call out what have been near universally-condemned quotes.