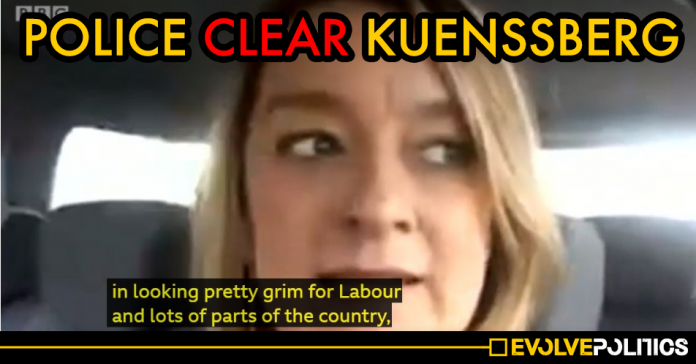 The Metropolitan Police have cleared the BBC’s Chief Political Editor, Laura Kuenssberg, of committing any electoral crime after she appeared to reveal confidential information about the outcome of postal votes during December’s General Election campaign.

In December, Evolve reported how Ms Kuenssberg appeared to breach electoral law by revealing that the postal votes were “looking pretty grim for Labour in lots of parts of the country“.

Kuenssberg’s comments came during a live piece to camera on the BBC’s Politics Live programme – where she stated:

“The Postal Votes, of course, have already arrived. The parties – they’re not meant to look at it – but they do kind of get a hint. And on both sides people are telling me that the postal votes that are in are looking pretty grim for Labour in a lot of parts of the country.”

Kuenssberg’s comments – which came several days before voters were due to take to the polls – appeared to be in breach of electoral law.

As Evolve reported at the time:

“Revealing how people may have voted based on informaton from opened Postal Votes before the 10pm polling day cutoff is illegal because it could influence the way others choose to vote.

The Representation of the People Act 1983 clearly defines the law, stating:

However, in a letter received today, Evolve have been informed that after a “thorough assessment” of the allegations, the police have found “no evidence” that any crime was committed.

“I am the operational head of the Special Enquiry Team, a unit within the Central Specialist Crime Command. The SET is responsible for assessing allegations of crime relating to electoral fraud and malpractice.

The Metropolitan Police Service (MPS) received a number of complaints from members of the public regarding comments made by a political correspondent on BBC Television on the 11th December 2019 concerning postal votes.

Following a thorough assessment by the MPS and liaison with the Crown Prosecution Service there is no evidence of any criminal offences having been committed. As a result, the MPS will not be taking any further action.

Thank you for your patience in the time that it has taken for us to complete our assessment, for your records this matter has been recorded under reference 1238128/19.”