Secretary of State Michael Gove has been accused of hushing up figures over the exploding cost of food as a consequence of Brexit.

What assessment or estimate has been made of the increase in food prices in the run up to the UK leaving the European Union and the first five years after the UK’s departure?

Premature disclosure of information could seriously mislead the public and is not in the public interest.

In the lead-up to the vote, Leave-campaigner Gove had dismissed food industry ‘scaremongers’:

We can have cheaper and higher quality food. The one thing I would say is we will not in any way dilute high-quality environmental standards – we will make sure that our environment and animal welfare are protected.

Renowned food critic Jay Rayner was one of those invited to contribute:

Gove needs advice, because our whole food supply chain has been imperilled by the Brexit vote. Brexit is implicated in every single aspect of our food supply chain and risks imperilling the very health of the nation.

However, Rayner declined the invite and it seems the round table subsequently struggled to innovate.

MP Liam Fox’s attempt to portray a US deal in which the UK would import tinned chlorinated chicken as “an insignificant detail” was lambasted by senior EU figures as “ignorant and indigestible”.

The rising cost of food – official figures suppressed or otherwise – is now an evident fact of life for the British consumer. In the past year alone, basics such as butter have risen in price by 53%.

Since 2010, homelessness has doubled whilst one food bank charity (and there are many) – The Trussell Trust – has seen demand for food parcels rise from 61,500 to 1.2million. Although Tory backbencher Jacob Rees-Mogg recently chimed in with at attempt at a positive spin on the increase, eulogising the existence of food banks as “rather uplifting”. Before going on to contradict his apparent delight for societal need with the absurd claim:

the real reason for the rise in numbers is that people now know that they are there and Labour deliberately didn’t tell them. 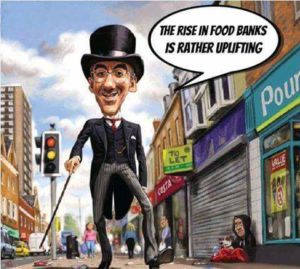 When asked why even nurses needed to resort to charitable donations of food, Prime Minister Theresa May replied:

There are many complex reasons why people go to food banks.

One particularly “complex reason” apparently being a victim of unprecedented tragedy, with Grenfell survivors currently forced to use them in spite of the – genuinely rather uplifting – fact that £20m has been raised by the public in aid. Eligibility for food banks must be signed off either by doctors, social workers or dole officers.

Jeremy Corbyn has repeatedly denounced the increase in the use of food banks as a “shameful” symbol of poverty under the Tories.

Consequences of ideological-driven austerity also coincided with the introduction of supermarket self-service tills, which has seen astronomical increases in cases of shoplifting – with the ease of theft combined with the financial pressures suffered by many held up as a convincing factor contributing to the rise.

The rise in food bank use and the silencing of information to control the masses are typical of the Tory’s deluded sense of superiority. It is a painfully-fragile, illusory identity built on the brutality in their shameless bullying of the working classes; and their smug glee in having successfully hoodwinked the middle classes into endorsing them. They are acutely aware that their grotesque financial wealth is unjust and an undeserved privilege. These are expensively-educated people, after all. Their refusal to compromise at all regarding their inordinate financial wealth is mere cowardice; total terror at losing their highfalutin status. They revel in gluttony as the rest of us resort to food banks. They are conscious about the state of affairs. And this consciousness makes their behaviour inhumane.

In 1906, Lord Cameron of Dillington claimed it would take a mere three days of meals missed by hungry children and distraught parents for the country to descend into riots, describing Britain as just “nine meals from anarchy”.