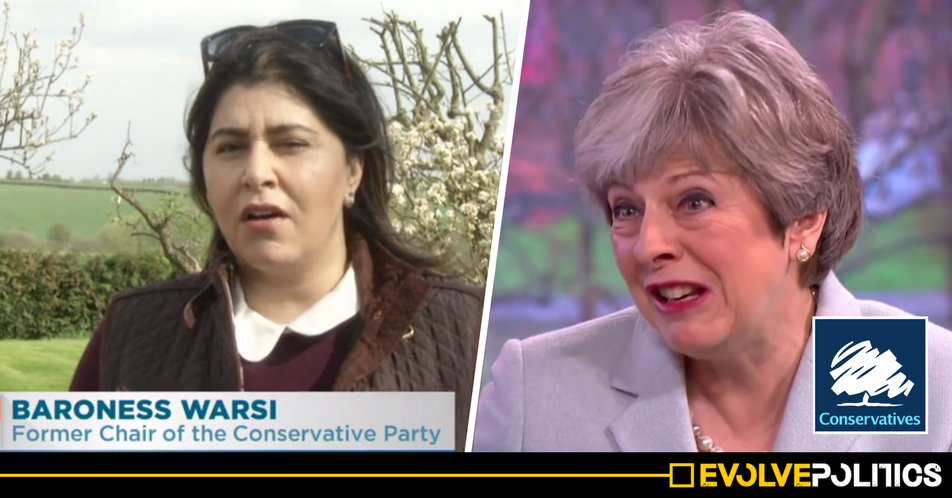 The first Muslim woman to become a Conservative Minister has exposed the fact that there are now ‘weekly occurrences of Islamophobic incidents” within the Tory Party.

In stark contrast to the wall-to-wall media coverage of supposed ‘rampant anti-Semitism’ within the Labour Party, the former Tory co-Chair Baroness Warsi’s staggering statement that Islamophobic incidents are now occurring on a weekly basis in the Tory party has been met with absolute silence from the entire British mainstream media.

Speaking on ITV’s Peston on Sunday show, Baroness Warsi – the former Conservative Party co-Chair – was responding to a question over the Tory Party’s handling of the Windrush scandal, when she said that:

“The debate and discussion around immigration – certainly during the coalition years – was very strong around the Cabinet table, and it wasn’t just along the lines of the Liberal Democrats [against] the Conservatives. Many many of the Conservatives around that table – many of my colleagues – were some of the harshest critics of what was being done in the name of more controlled immigration.

Those debates didn’t just focus around what we’re dealing with now but also around, for example, student numbers, visitor applications and trade applications – so there was a much broader debate.

[But] I think what happened – unfortunately – during those years, and what has continued, is that we had an unhealthy obsession with numbers. We were wedded to unrealistic targets – targets which we still haven’t met – unfortunately – a decade on.

And yet we continue to remain wedded to these targets – and what ended up happening was that we ended up with an attitude of, I think, indifference to what could have been the unintended consequences that we’re now seeing of the policy that we were implementing.

But I think rather than just looking back at this moment in time and calling for resignations – what I want, and what I welcome really, is, first of all, the apologies. Secondly the offer of compensation – which I hope will be quick and clear.

But then I hope moving on from that all politicians on all sides of this discussion [can] move forward and really pledge to move away from that rhetoric – the way in which we ‘other’ communities amongst us.

And it goes beyond just the immigration debates. I mean we have seen the appalling othering’ of the British Jewish community and the anti-Semitism row within the Labour Party.”

But Baroness Warsi did not stop there.

Rather than joining the majority of her fellow Tories by attempting to politicise the current racism debate by completely whitewashing the Tories’ own problems, the former Tory co-chair went on to say that:

“I know within my own party there are almost now weekly occurrences of Islamophobic incidents and rhetoric – and we saw it during the Brexit debate.

So I think – you know – what we should learn from this is that if we start to ‘other’ communities in this way we start to make people amongst us – our fellow citizens – feel like they do not belong.”

Baroness Warsi’s admission that racism was rampant within her own party was an utterly startling moment. Here was a cast-iron Tory choosing, not to use racism as a political football like her colleagues, but actually admitting that her own party also faced similar – if not far more extreme – problems with racist members as the Labour Party.

However, what was even more starling was the fact that the host, Robert Peston, completely ignored Ms Warsi’s incredible statistic about the sheer scale of racism within her own Party.

And now, despite Evolve willingly giving the media a full day to report Ms Warsi’s incredible statement in the same way they have been reporting similar statements about anti-Semitism within the Labour Party, there has been complete and total radio silence from the entire British media.

With the BBC acting as head cheerleaders, the British mainstream media have – for the past several weeks – reported the on the Labour Party’s supposed racism problem like it was exclusive to them, and them only.

But here was a Tory MP literally admitting that her own Party was just as bad when it comes to racism – if not far worse than Labour. And yet the media is completely silent.

Is the media’s silence simply because they don’t think disgusting Islamophobic bigotry is as bad as disgusting anti-Semitic bigotry?

Or is the media’s silence down to the fact that they only seem to care about racism and abuse when they can use it as a stick to beat Jeremy Corbyn and his supporters?

In all likelihood, it’s almost certainly both.