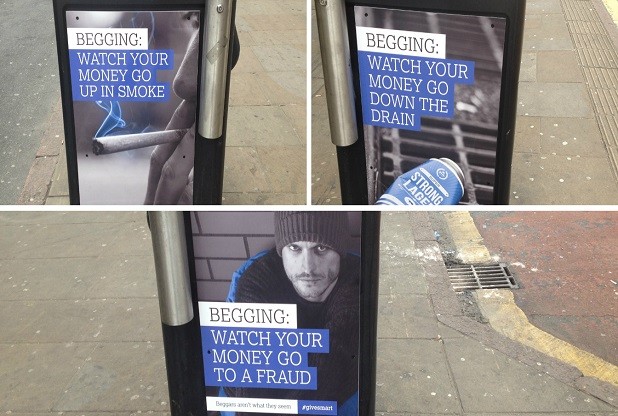 Last week, adverts were put on bins and bus stops around Nottingham City Centre with slogans such as: “Begging: watch your money go down the drain”. Another reads: “Beggars aren’t what they seem”. This has been named the “#givesmart” campaign, and is supported by Nottinghamshire Police.

Although it encourages people to give money to charities instead of directly to beggars, the “war on the homeless” has sparked anger with residents.

Despite the fact that Nottingham didn’t open its empty buildings to the homeless over winter, whilst cities like Stoke and Manchester did, it is a “No Second Night Out” city.

Leader of Nottingham City Council, Councillor Jon Collins, said: “no-one who presents themselves as a rough sleeper will face a second night out on the streets.

“The Council spends over £8 million per year on commissioning specialist treatment services for alcohol and drug addiction.”

Mr Collins also described “many” of the homeless as “professional beggars” who “have already been provided with accommodation and use the money to feed their lifestyle”.

Dave Smith, Service Director for the local homeless Charity Framework, spoke to the Nottingham Post in support of the campaign: “If people do wish to give money to help homeless and vulnerable people, we would advise them to support a registered charity with the knowledge and experience needed to bring about lasting change.”

Granby Kitchen offers a “Pay It Forward” scheme giving customers the option to buy someone in need a three course meal for £2.50.A spokesperson for the community café said: “It’s a ridiculous campaign that just aims to stereotype all homeless. “In my humble opinion they need all the help they can get and the cost of this could have been better spent getting them more accessible warm and safe places to be.”

Twitter users on the campaign’s hashtag have described the movement as “vile” and “shameful”, saying it “demonstrates the politician’s ineptitude”.

Chief Inspector Shaun Ostle, head of the City Centre’s police, said: “Nottingham has made huge strides in reducing begging in recent years, but we know it is still a major concern with citizens.

“Enforcement is only one part of the solution and in fact everyone has a role to play. That is why we are asking people to change the way they give.”

Luke Johnson, a Nottingham resident who used to be homeless on the city’s streets, told us what he thought of the campaign:

How you can support the EvolvePolitics project

We can only remain independent through subscriptions and one-off donations from our readers – money that helps keep our writers producing truly independent journalism, free from establishment bias or agenda. If you like what we do and want to donate to keep our project going, there are several different options available to you.

You can subscribe to our website for a small amount of money each month – you can choose between £1, £2, £5, and £10 a month, depending on how much you can afford to set aside. By becoming a subscriber, as well as helping to keep us independent, you will also be the first to know about our stories by recieving email updates when we post new articles.

Whether you can spare pennies or pounds, we are extremely appreciative of all of your support.