Home Funny Politics News and Satire People are crowdfunding to buy Katie Hopkins’ house to turn it into... 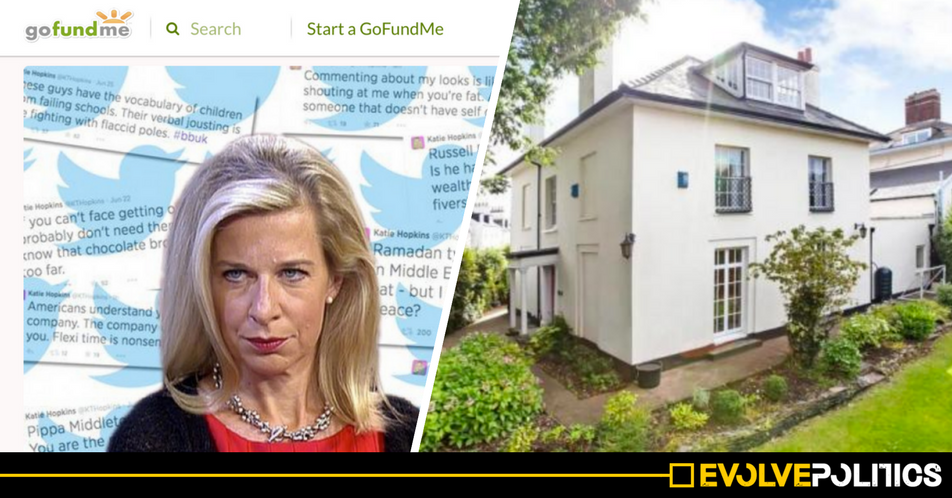 Arch hatemonger and anti-immigrant bile-spewer Katie Hopkins has been forced to put her £1m mansion on the market after losing a highly expensive libel case against food writer and political activist Jack Monroe – and now, in a brilliant twist of irony, people are raising money to buy Hopkins’ house in order to provide shelter for refugees and asylum seekers.

Hopkins’ vile views on immigrants and refugees are well known after she wrote a column in which she said she would use gunships to stop refugees from fleeing war and persecution, and the move to buy her house in order to shelter refugees and asylum seekers would almost certainly cause Hopkins a huge deal of anger.

Hopkins’ 5 bedroom semi-detached house is currently on the market for £950,000, and it would take a significant amount of donations to raise enough money to buy the house – but, should enough people donate to the cause, the house could finally see itself being put to good use.

The fundraiser was created by Swindon-based activist Scott Walker, who hopes to raise the full £950,000 to buy the property outright. On the GoFundMe page, Walker writes:

The plan my good people, is to buy Katie Hopkins family home and use it to either house refugee’s or asylum seekers.

This would be a great victory for the people of this country, because as we all know, this bigot has had far too much air time recently and drastically needs taking down a peg or two.

Walker has also reassured donors that should the full amount not be raised, ‘all funds will be automatically refunded’.

Hopkins was forced to put her house up for sale after losing a highly publicised libel case after falsely accusing food writer and political activist Jack Monroe of defacing war memorials.

During a Twitter spat between the two, Hopkins had initially tweeted to her 850,000 Twitter followers about Monroe, saying:

Scrawled on any memorials recently? Vandalised the memory of those who fought for your freedom. Grandma got any more medals?

To which a clearly angered Monroe replied:

I have NEVER ‘scrawled on a memorial’. Brother in the RAF. Dad was a Para in the Falklands. You’re a piece of s***

Hopkins then claimed her tweet was actually intended for Laurie Penny, but Monroe was having none of it, demanding Hopkins make a public apology for her false accusations as well as requesting she make a donation of £5,000 to a migrant rescue charity.

Hopkins deleted the tweet, but refused Monroe’s settlement, at which point Munroe decided to sue Hopkins for libel.

The court ruled in favour of Monroe, judging that Hopkins had caused ‘serious harm’ to her reputation by tweeting the false information to her numerous Twitter followers.

Subsequently, Hopkins now has to find a mammoth six-figure sum to pay the resultant legal costs and damages, putting her house up for sale in an attempt to raise the money.