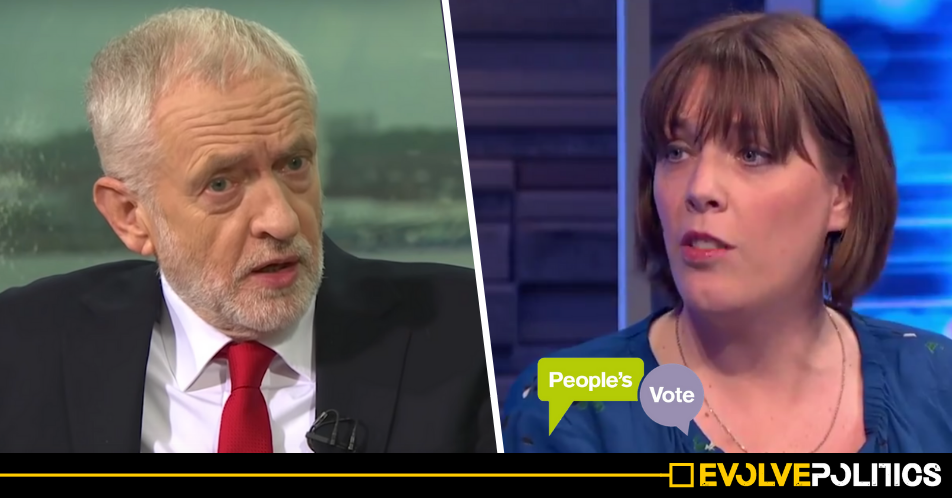 The Pro-Remain Labour MP, Jess Phillips, has confirmed that she will strongly consider defying the Labour whip to vote in favour of Theresa May’s widely-criticised Brexit deal – a revelation that seems to directly contradict her support for a ‘People’s Vote’ and makes a mockery of its supporters’ constant jibes at Jeremy Corbyn for supposedly ‘not doing enough’ to stop a Tory Brexit.

In last night’s (Wed) episode of Peston, Phillips also said that she believed a lot of her fellow Labour MPs would vote for May’s deal, if the alternative was a ‘No Deal’ Brexit.

Phillips’ admission that a large number of her Parliamentary colleagues may be about to back a Tory Brexit comes despite the same group of Labour MPs having lambasted the Labour leader Jeremy Corbyn over the past 2 years for supposedly ‘not doing enough’ to oppose a Tory Brexit.

Labour MP @jessphillips says that she would be prepared to defy the party whip and vote for May’s deal to protect the interests of her constituents. #Peston pic.twitter.com/jBhk1e60C3

When asked by Preston if she would have to consult her conscience before voting for May’s deal, Phillips said:

“We’ve got to be grown ups and look at all the options”.

The Birmingham Yardley Labour MP argued that she she would prefer to enable a Tory Brexit than see the UK crash out with No Deal, saying:

“I don’t want to be in a position where I’ve got a gun to my head because I have to think of the workers at Jaguar Land Rover, which – you know – the ERG seem to forget about all the time.

But I think quite a lot of Labour MPs – this isn’t about me and about what I hope for myself politically. I have to do whatever I can – like I would with my children – to protect the people in my constituency. And, I have to say, the Conservative Party have done absolutely nothing to protect the interests of the people where I live”

“You were on the record as saying you wanted a second referendum. Now you are more likely to vote for some version of the Prime Minister’s deal?”.

Phillips’ particularly baffling response was that whilst she may now be considering enabling a Tory Brexit in Parliament, she also believed that the deal needs to be put back to the public, stating:

“I’m still very much pushing for a referendum. Every week that we go on in Parliament, where we have come to a total impasse of sensible behaviour, the more I think that her deal and other options need to be put to the country”.

Following criticism of her apparent u-turn, Phillips added on Twitter that:

“To all those who can’t actually listen to what I said, I support a peoples vote but I will never let no deal happen. The Prime Minister is a disgrace to play chicken with the country because she’s too chicken to face her party who already hate her”

To all those who can't actually listen to what I said, I support a peoples vote but I will never let no deal happen. The Prime Minister is a disgrace to play chicken with the country because she's too chicken to face her party who already hate her

Phillips’ latest comments represent a particularly large departure from her initial opinion of May’s deal in November, when she appeared to describe the Tory deal as a ‘sh*t show‘:

Needs stressing that this deal we're talking about is not about our future relationship with the EU it's just about our withdrawal and how not to basically smash up our entire country in the process. This shit show is the first baby step we still have to run a marathon. #FFS

Phillips has also voiced her support for a second referendum on numerous occasions, with a poll commissioned by the official People’s Vote campaign for YouGov claiming that 63% of her Birmingham Yardley constituency were also in favour of a second referendum:

I'm for a peoples vote, I'll never be for the piety of thinking this makes me better than my colleagues and moreso many of my constituents. Really need to up our game on this discourse.

Phillips’ view appears to be that, whatever the outcome, the people should decide – but a ‘No Deal’ Brexit must be avoided at all costs , even if it involves enabling a Tory Brexit.

The latest revelations come less than a week after Jeremy Corbyn was forced to write to party members amid claims from People’s Vote-supporting Labour MPs that his decision to engage in cross-party talks with the government proved he was ‘helping to enable a Tory Brexit’.

“My fear is that this is the [Labour] leadership rolling the pitch for accepting a version of Theresa May’s deal, and I think that will be at odds with our values and damaging to our country and damaging to the politics that we’ve traditionally believed it.”

“Brexit is a right-wing ideological project and we should be opposing it on those terms.”

Whilst another Labour MP, Luciana Berger – a close Parliamentary ally of Jess Phillips’ – refused to deny rumours of her and other Labour colleagues discussing the formation of a breakaway anti-Brexit party, stating there was “a disaffection with the lack of leadership we’re seeing on all sides“, and adding:

“There’s many people that have many different challenges, not just Brexit, in terms of seeing leadership from all the main political parties.”

Whilst Chris Leslie, another Labour MP hostile to the party’s leadership, directly stated that:

“A lot of people’s patience is being tested right now [by the Labour leadership’s stance on Brexit]. I think there are some questions we are all going to have to face, especially if Labour enables Brexit.”

It remains to be seen how People’s Vote supporting MPs like Leslie or Berger might react if their Parliamentary ally, Jess Phillips, did the exact thing they have consistently criticised Jeremy Corbyn for – in directly enabling a Tory Brexit.