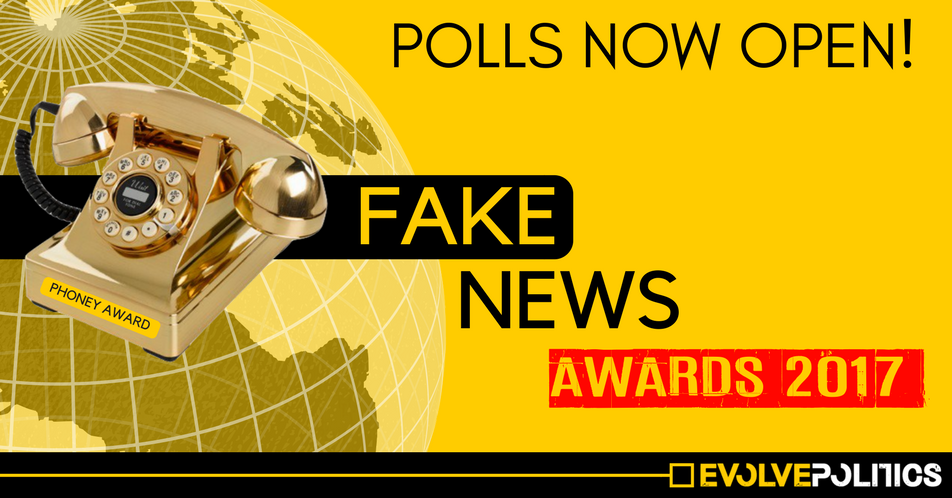 As regular readers may remember, last year Evolve hosted the inaugural Phoney Awards acknowledging some of the mainstream media’s epic faux pas and incredible foolishness in the world of ‘fake news.’

Seeing as 2017 had such a rich crop, we couldn’t let this year’s contenders go unsung or unheralded.

Seeing as we’re a pro-active bunch at Evolve, this year’s winners will be chosen by public vote. Yes, readers, YOU choose. YOU have the power.

This year’s winners will be announced on Christmas Eve, just in time to add extra festive cheer for our lucky recipients!

So, without further delay, here are the nominations.

***Rustles envelope as grand classical music swells in the background***

To begin, ‘Newspaper of the year.’ 2017 has seen so many worthy contenders that it’s impossible to include them all. With that in mind, the nominees are…

The Daily Mail for, amongst many, many other things, getting itself banned by Wikipedia: a ban ‘Centred on the Daily Mail’s reputation for poor fact-checking, sensationalism and flat-out fabrication.’

The Daily Star for its coverage of an incident at Oldham Hospital shortly after the Manchester bombing. With its sister-paper the Daily Express, The Star has shown itself a worthy candidate indeed.

Finally, our last contender is the super, soaraway S*n. One of last year’s winners, it’s reputation for reliable reportage is as strong as ever. Consider their attack on a mother generously providing for her children’s Christmas, then vilifying her for being on benefits. A worthy contender, indeed.

Columnist of the Year again has many rich, varied, consistent contenders. Polly Toynbee’s perpetual dislike of Jeremy Corbyn and genuine concern for her beloved Labour Party (having Labour for the SDP after not being elected as an MP in 1983) has been a front-runner.

Nick Cohen’s sneering, insulting, sometimes profane diatribes against Corbyn and anyone not loathing him have been consistently obnoxious and often equally laughable. Another worthy contender for this year’s crown, perhaps.

Or perhaps Toby Young’s usually-dull, sometimes-offensive and seldom-not-ridiculously McCarthyite attitude to anyone who isn’t a Corbyn-hating, Red-baiting, Daily Mail-reading blowhard might deserve your vote. His recently comparing Momentum with neo-fascists Britain First (only to be roundly mocked for it) was a special highlight, after all.

Broadcaster of the Year has been a difficult choice, too. There are still too many to list, let alone nominate. After much soul-searching and checking of their year’s output, we have the following…

The BBC for its efforts to persuade licence-payers there isn’t an exchange programme between BBC News and Conservative Central Office. Additionally their ‘fake news’ campaign in schools and universities where they (and seemingly they alone) define what is and isn’t fake news.

LBC’s Nick Ferrari, recently winner of this year’s British Journalism Award for ‘Journalist of the Year’ for his handling of Diane Abbott. Perhaps his handling of Theresa May during this year’s general election campaign was a tad less rigorous (and could have been rather more rigorous by comparison)

And finally former UKIP leader Nigel Farage for attacking anti-racist campaigners ‘Hope Not Hate’ then having to ignominiously settle the resulting lawsuit. While saluting Nigel’s indefatigability, let’s not overlook his recent endorsement of Germany’s far-right AfD party. This while denying the Brexit movement might have an element of racism and xenophobia.

Late entrant David Morris (Conservative MP for Morecambe) for recently accusing Momentum of propagating lies and propaganda about child poverty in his constituency. He’s been challenged to support or retract his allegations, but at the time of writing has done neither.

Last, but by no means least, we have Prime Minister Theresa May. Another late entrant, May claimed Chancellor Philip Hammond definitely hadn’t accused disabled people of lowering productivity by entering the job market. Ironic, when you consider Tory welfare reform policy. Unfortunately for our beloved PM, Hammond was then proved to have done exactly that. Another strong and stable performance from our truly esteemed Prime Minister.

And, finally, we have Website of the Year. Again, there are many strong contenders (though not many fine ones).

First up is the mighty Facebook for its efforts to combat the evils of fake news. Facebook, however, seems to have its own considerable difficulties in telling the difference.

Our second nominee is the ever-lovely Mail Online. Already conspicuous for the irony of decrying sexism in one online article while while the dozen beside it show endless pap shots of scantily-clad women, Mail Online’s coverage of the Oxford Street van incident in London was an especially worthy contender for most incompetent, unhelpful news item of the year.

Last, but by no means least, our old friends at Guido Fawkes for their attempted smears of Novara Media, Skwawkbox and ourselves. Attempted, but, much to the mirth of many so smeared, outed as, ironically, fake news. Speaking of irony, Guido has sneered at Evolve’s membership of the Impress media regulator. Perhaps in Guido’s eyes only ‘proper’ media outlets deserve to join press regulatory bodies. Which, if you’re of a sarcastic bent, might explain why Guido Fawkes isn’t regulated by any of them.

And now, dear readers, over to you. You choose, you decide. We’ll act as you command and the winners will be announced on Christmas Eve.