“I f*cking love the Foo Fighters.” This universal truism may be one of the few messages that could unite the Labour party. I mean, Dave Grohl has been in one of the world’s greatest rockbands. Twice. We should all unite behind Jeremy “Best of You” Corbyn against Owen “the Pretender” Smith. Of course, we all know by now that this simple, beautiful message can get you banned from the party if you support Corbyn. But how easy is it to get banned from the right?

This question brings us to Labour First member Bernard McEldowney. McEldowney is on a mission to save Labour. It’s a mission that can only succeed if that “b*stard” “traitor” Jeremy Corbyn resigns. Anything else is destruction. 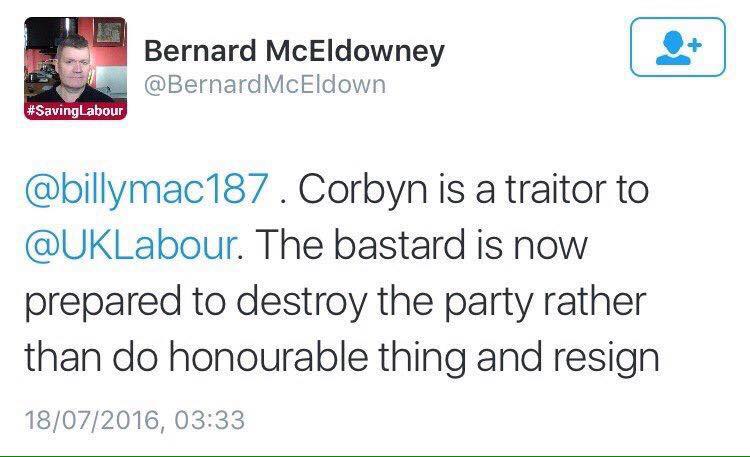 It’s hard to draw the line at McEldowney’s language when he has such an illustrious history. Mr McEldowney has previously been involved in several allegations of common assault. Whilst a Sergeant in the police force he allegedly took a swing at a fellow officer, although there was not enough evidence to convict. And four years before he had also seen charges of assault brought against him – this time for allegedly assaulting a suspect in police custody – although again was not convicted. More recently he can be found retweeting American police officers complaining about how difficult it is for them to do their jobs, as well as arguing that victims of historical institutional abuse should not recieve compensation.

Iain McNicol, Labour’s General Secretary issued this statement as a warning to Labour members who engage in online abuse:

But, I hear you ask, maybe Mr McEldowney’s abusive tweet was just a one off?

As you can see from a collection of his tweets, Mr McEldowney is not averse to repeated and abusive namecalling of the Labour leader, or other Labour members. 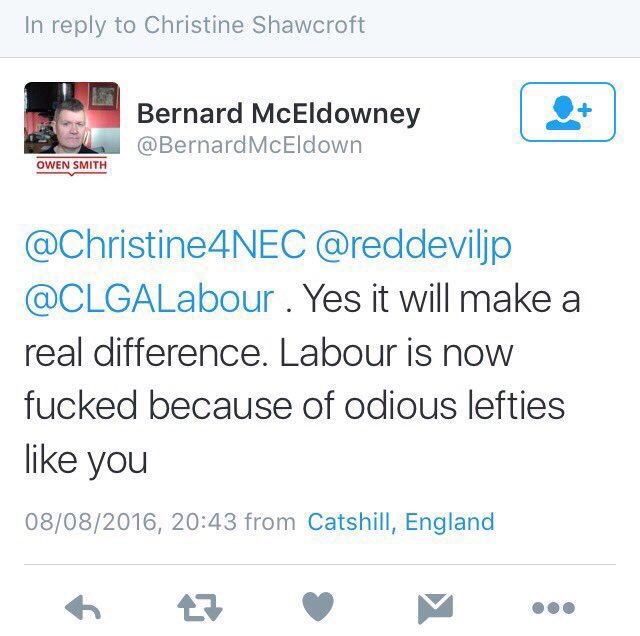 . Jamie will always get an X from me. Real @UKLabour man unlike traitor @jeremycorbyn #CorbynOut

That bastard @jeremycorbyn supporter celebrating @UKLabour is involved in a civil war and he doesn't give a fuck! @BBCNewsnight #CorbynOut

. I prefer to stay to take the fight to the bastard #corbynites. They must be defeated

(As we envisage these tweets being removed hastily, we have included links to these tweets as media files here and here)

Of course to focus on the language, “Blairite Traitor” is a cause for investigation within the party, according to a list leaked to the Huffington Post. As is “Trot vermin” for those of a different stripe. However despite Mr McEldowney being reported by several Labour members for repeated abusive language on social media, it appears that ‘traitor’ and ‘b*stard Corbynites’ are not cause for suspension. It’s almost enough to make you feel sorry for old Tony. It’s very rare that someone’s name becomes an insult, even if they did mislead the public into a war.

The language of the leadership debate has been the focus of intense scrutiny in recent weeks. With the abuse received, particularly by female members, wholly unacceptable. Owen Smith has also routinely criticised Corbyn for not doing more to stop abuse. Even going so far as to insinuate that the abuse started because of Corbyn. As anyone around during Dianne Abbott’s leadership bid will tell you, this is not true.

McEldowney is obviously very aware of the problems with abuse within the party, criticising Corbyn for talking to the man who abused Ruth Smeeth. Of course, Corbyn must take full responsibility for the actions of a middle aged man who can make his own decisions. Now the abuse of Ruth Smeeth was unacceptable and Corbyn has condemned the man who made the comments but this is not good enough for Bernard. Nothing less that Corbyn’s resignation will satisfy. I can’t wait for him to call for his own resignation over his own remarks. It should be Kafkaesque theatre.

Of course McEldowney isn’t the only one on the right throwing vitriol. A compilation of remarks over twitter include so many expletives they’d make Gordon Brown blush. When Corbyn is not being called a lunatic by Smith he’s a t***, a c***, a different c***, and even a c***.

McEldowney’s language matters because it shows how our party treats different cases. His relative immunity to the normal consequences of screaming “traitor” reveal that it was never the word traitor that bothered the party. It was the word Blairite.

How dare the members use our icon as a slur?! How dare they sully the record of “the most successful Labour PM ever?!” How dare they bring up his failings?! Do they not see he was the saviour of the Labour party from the tyranny of its membership!?

Skepticism about this leadership election is starting to spread. Not, like the right would have you believe, because of those taking part but because of who isn’t allowed to. The endless purges are doing nothing but eroding faith in the system, they must stop.

We asked Mr McEldowney for comment, but he simply blocked us from communicating. 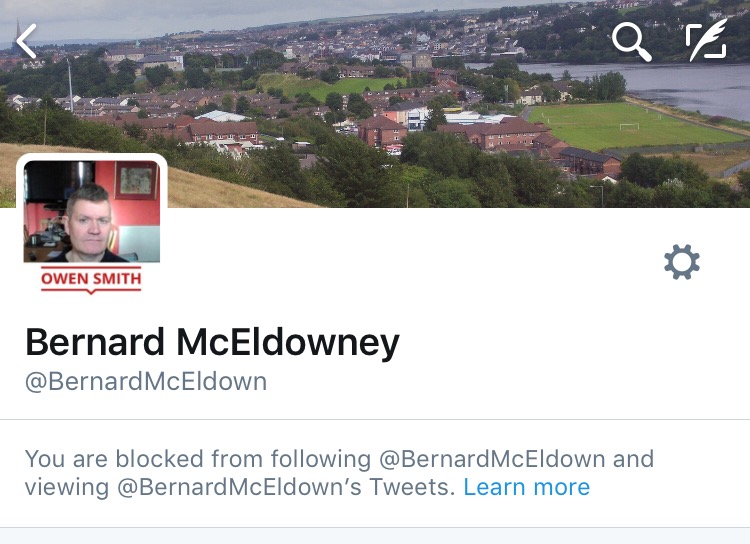