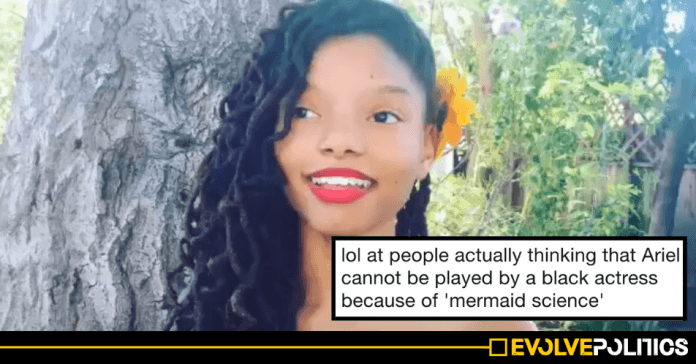 As you may have seen, Disney have just cast Halle Bailey, a black actress, to play Ariel in the live action remake of The Little Mermaid – and racists are, surprise surprise, seriously unhappy about it.

Yes, despite mermaids being completely mythical beings, and despite Ariel being an entirely fictitious character in a cartoon which also features a singing crab with a Jamaican accent, some people really are trying to use actual science to “prove” she could never be black.

One Twitter idiot argued that mermaids couldn’t possibly be black because they lived deep underwater, stating:

“My opinion on why mermaids are white is that they live so deep underwater that sunlight hardly reaches them, thus the lack of melanin. It doesn’t matter what ocean they’re from cos they could’ve been migrating seasonally like fishes. But maybe im thinking too much.”

Whilst another moron attempted to claim that science proves that all mermaids would actually be albino, stating:

“Mermaids live in ocean. Underwater = limited sunlight. Limited sunlight = less melanin. Less melanin = lighter skin color. Because they live underwater, which has no access to light beyond a certain depth, Ariel and every other mermaid in existence would be albino.”

Thankfully, these attempts to justify racism with extremely poorly-researched and entirely illogical science were roundly and categorically ridiculed by the vast majority:

lol at people actually thinking that Ariel cannot be played by a black actress because of 'mermaid science' pic.twitter.com/5Djt0Wrfkn

The actress cast as Ariel can sing, act, dance, and is beautiful. But racists (yes, that extreme irritation you feel is racism) are like MeRmAIds CaN’T Be bLacK!
Well, crabs can’t talk so we’re all stretching here. Shut up. https://t.co/Q5oAdwMU2a

Fact box: the Little Mermaid lives on a TROPICAL CORAL REEF with a calypso-singing lobster with a strong Jamaican accent. When you think about it, it's bizarre she was white the first time around.

A non-white actress has been cast as Ariel in Little Mermaid?! It's totally unrealistic that Ariel would be black!

You do remember this is a film about a mermaid who's friends with a singing and dancing crab, right?

"iM nOt rAcIsT bUt tHe LiTtLe mErMaID nEeDs tO bE wHiTe"

Spare me the nonsense that Ariel NEEDS to be white, she is a MYTHOLIGIAL SEA CREATURE.

And, unfortunately for the racists, there are also numerous underwater creatures which are indeed black, such as killer whales and anglerfish:

This is a deep sea anglerfish. They live between approximately 2300-3300 feet beneath the ocean. Most visible light fades within about 400 feet from the surface. Notice what color it isn't: white. pic.twitter.com/VARoQ1t92y

Furthermore, Ariel actually spends a lot of time out of the water, in the sun – a fact which is conveniently overlooked by the racists.

Remember: racists idiots are never looking to find the truth or what’s right, they’re simply looking for any reason whatsoever to try and justify their own discriminatory, white-supremacist mindset to both themselves and other people.