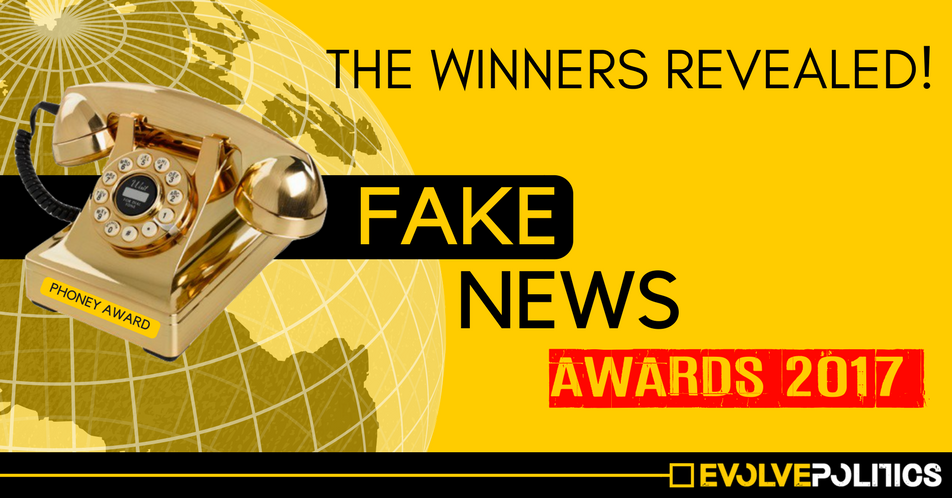 Well, we asked and you answered. The polls are closed and this year’s winners, sterling candidates all, have been decided.

Not having corporate sponsors, we’ve dispensed with rousing classical tunes between awards, but did find some chap in the pub with a kazoo and a Bontempi organ. On workfare, naturally.

Before announcing 2017’s biggest losers, we’d like to acknowledge a few ‘Highly Commended’ candidates. 2017 provided so many worthy contenders that we couldn’t provide a poll large enough for them all, so here are some who didn’t quite make the cut.

David Davis, for his principled stance regarding the Damian Green fiasco. Davis promised to resign if Damian Green was sacked and then, erm, didn’t. Apparently his promise, like so many from the current government and the result of the Brexit referendum, wasn’t binding.

James Cleverley, for ignoring all fake news from our mainstream colleagues while attacking opponents for producing exactly that. His recent Twitter thread on the subject shows he hasn’t handled the fake news concept all that Cleverly.

Edwina Currie, a late contender. Her recent piece in the ipaper shows a staggering disinterest in current affairs while completely ignoring anything of real substance. And no, Edwina, you’re not poor and suffering if you own rental properties whilst other people are forced to use foodbanks to survive.

The BBC’s Nick Robinson, whose continual disdain for criticism has made him few friends outside the BBC bubble. Nick’s Twitter feed has consistently provided amusement and annoyance, but his spinning Green’s departure as a sign of May’s strength and stability particularly stood out.. Definitely one to watch for 2018.

And finally, for perhaps the single most reality-defying article of the year, we have Dan Hodges. Had his staggering, embarrassingly desperate defence of Damian Green appeared a day or two earlier he’d have been a front-runner. And let’s not forget his reasoned, objective, dispassionate and not-at-all toe-curlingly embarrassing ‘sword of truth,’ come to think of it.

That said, will 2018 be the year of Peak Hodges? Will Warden Hodges continue staggering through dogmatic darkness hysterically shouting ‘Put that light out!’? Better luck next year, Dan.

Now, having acknowledged those not making the cut, it’s time to honour those who did.

Newspaper of the Year was no great surprise. The Daily Mail (AKA the Daily Fail, Daily Heil and Daily Vile) has so poor a reputation that winning 85% of the vote shocked nobody. That said, their enthusiasm was such that they continued embarrassing themselves even after their nomination.

Their recently door-stepping activist and Twitter star @Rachael_Swindon would have sealed their victory. Fellow dirt-merchants The S*n proved a disappointment (no surprise there), managing only 15%, while the Daily Star (barely recognisable as an actual newspaper instead of a comic) polled a staggering 0%.

Columnist of the Year was far more closely contested. Polly Toynbee dragged in last, garnering only 14%. The real fight was between Nick Cohen and Toby Young, both well-known for loathing lefties and perpetual attacks thereon. While the Toadmeister could only manage 41% of the popular vote, Cohen was a worthy winner at 45%.

Broadcaster of the Year was a runaway success for our old friends at the BBC. With an unsurprising 67% of the vote, they came in far ahead of LBC’s Nick Ferrari (on only 15%) and even left Nigel Farage in their wake on only 18%. That said, neither Ferrari or Farage is likely to mind not topping this particular list.

Politician of the Year proved a staggering success for our ever-popular Prime Minister. Indeed, her 72% share (probably the largest majority she’ll ever have) was truly strong and stable. Probably the only thing about her that actually is. Having bought the support of the DUP to cling on to power, May is hoping to buy the 1922 Committee (the Tory body in charge of leadership challenges) by doling out honours to half its members.

Seemingly, May does have a magic money tree. And it comes with plenty of decorations.

David Morris, a whose accusations that Momentum seemingly control ITV News came just in time, polled a derisory 8%. Whether he’ll achieve similarly dizzying heights at the next General Election remains to be seen.

May’s disgraced former deputy Damian Green (he of the fascinating internet search history) could manage only 20%. That said, his public profile has skyrocketed lately.

And, finally, we come to Website of the Year. Three very strong contenders battled mightily for the crown. Facebook’s decrying of fake news (and their bungling inability to actually deal with it) earned only 7% of the readers’ vote, leaving other candidates Mail Online and our ever-lovely friends at Guido Fawkes as the real contenders.

Not surprisingly, ghastly Guido defeated the mighty Mail, earning a whopping 49% of the vote against the Mail’s 45%. Still, at least even Guido finally proved good for something.

Well, that’s it for 2017. Time to take a little break before returning to the grindstone. That said, media types hoping to avoid nomination in next year’s awards should remember one thing; the internet remembers your every gaffe, blunder, or moment of madness.

And we’ll be watching for them…