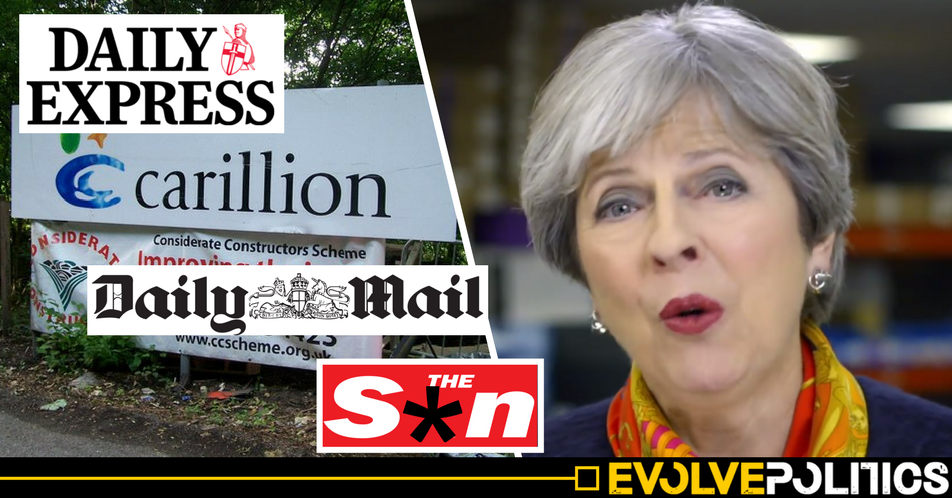 The catastrophic collapse of government contractor Carillion has the potential to make tens of thousands of British workers redundant, and the inexplicable financial incompetence of the company could easily end up costing British taxpayers billions.

The bosses of Carillion conveniently managed to change their own rules shortly before a disastrous financial crisis hit the company to ensure they were able to retain their multi-million pound bonuses should a financial meltdown such as this occur.

And, in possibly the most ironic news this year, the Chairman of the now liquidated Carillion firm was literally an advisor to Theresa May on ‘Corporate Responsibility’.

The plight of Carillion, with all of its potentially disastrous consequences for both British workers and taxpayers, is so obviously the biggest story in Britain right now. Yet, somehow, the biggest selling papers in Britain – those that claim to represent the views and interests of ordinary British people – have all, unanimously, failed to run the story as their front page splash.

Rather than report a story which could see 20,00 British workers made redundant, the Murdoch-owned Sun – who claim to report news that British workers want to read – have run this as their headline: 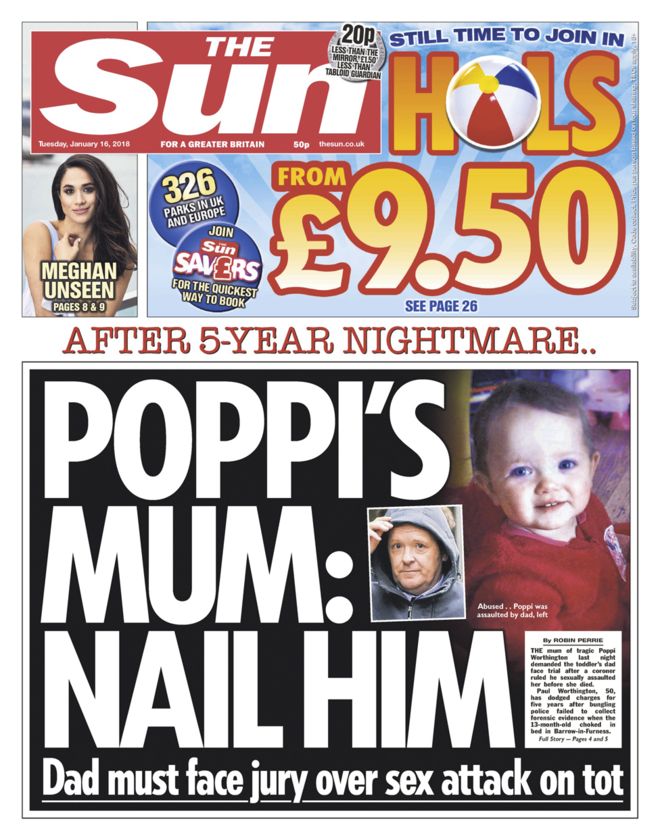 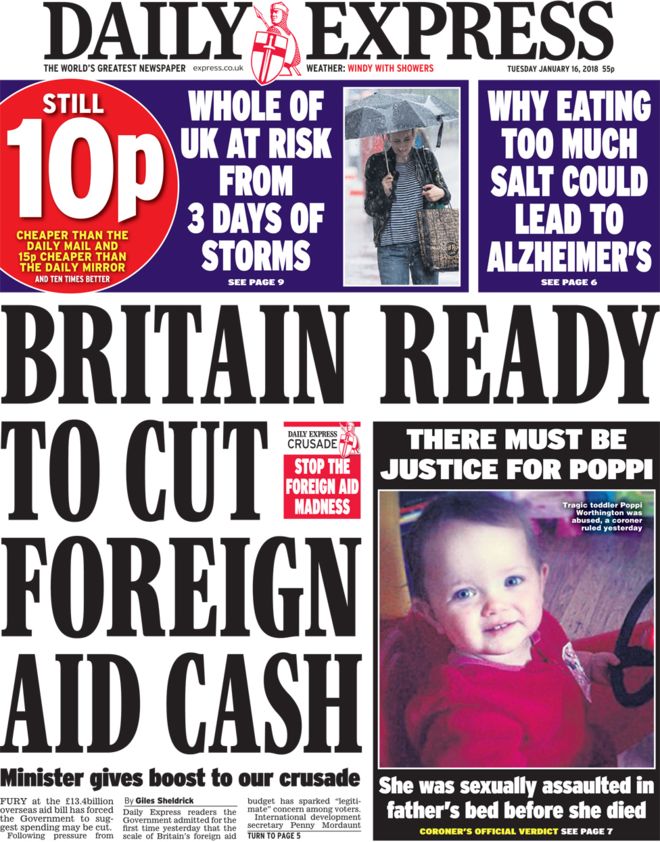 Britain’s most widely circulated paper, The Daily Mail, seemed to think that supermarket Iceland banning plastic – noble a cause as it may be – was more worthy of a front page slot than tens of thousands of British workers potentially losing their jobs, British taxpayers potentially being forced to fork out billions because of the financial incompetence of a private company who were awarded contracts by the government despite it being well-known that the company was already in dire financial straits, and insanely greedy bosses protecting their multi-million pound bonuses whilst they watched their own company hit the rocks because they knew the taxpayer would have to foot the bill: 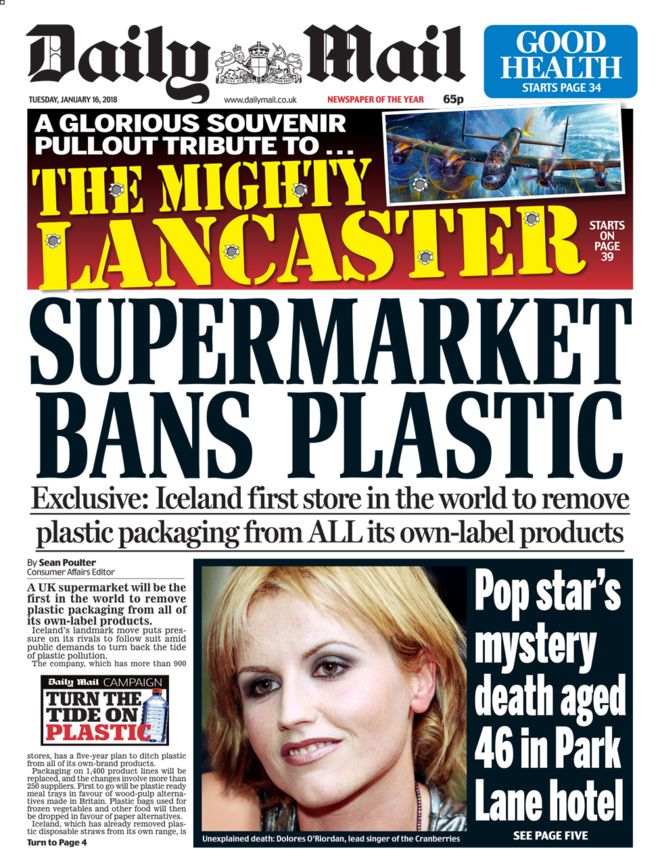 Even The Telegraph, who unlike the laughably partisan right-wing rags, usually tend to err on the side of reason when such monumental stories are broken – even if such stories do cast their beloved Conservative chums in a poor light – has somehow decided to relegate the story to a tiny little snippet in the bottom left hand corner of their front page: 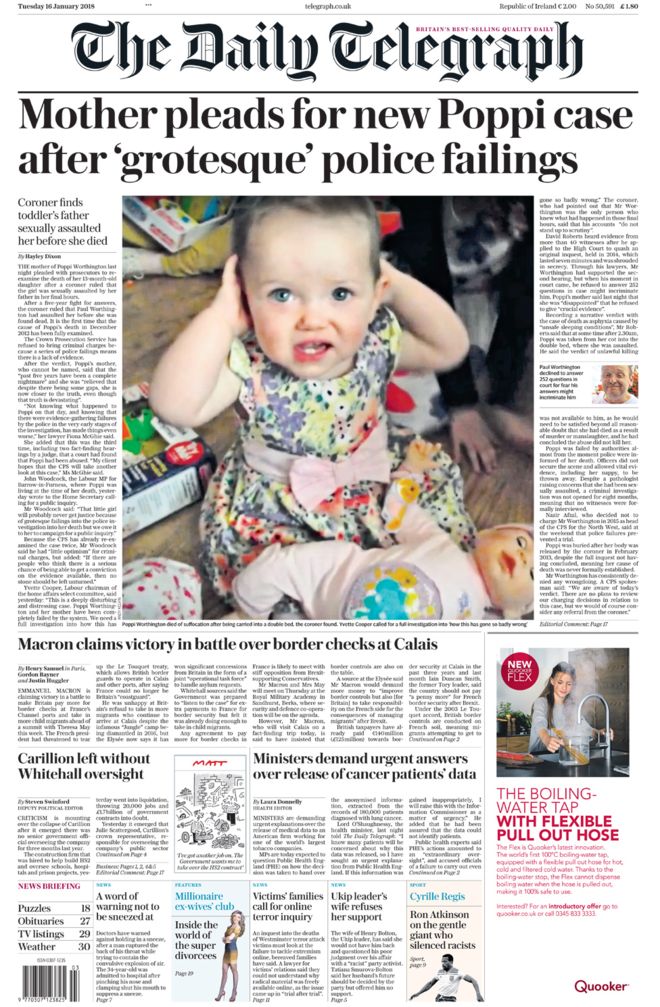 Compare the headlines of these right-wing newspapers with the headlines on every single other paper in the country, and you’ll see just how extraordinarily brazen these pro-Tory comics are being about protecting the interests of their super-wealthy Conservative Party chums.

The reason for this coordinated front page omission is simple. The plight of Carillion is a watershed moment in the history of our current economic orthodoxy – one that has the potential to cause a massive shift in public opinion away from blindly tolerating the Conservative’s pro-privatisation agenda – an agenda which has provably only benefited huge corporations and the already super-rich, at massive cost to the British taxpayer.

As Jeremy Corbyn says in a Facebook video released shortly after the collapse of Carillion, it really is time to put an end to this evidence-free pro-privatisation madness.

We have a situation where the NHS was forced to pay out damages to a private company because it didn’t win a contract to run services.

We have a situation where Britain’s privatised rail service is now one of the most expensive in the world, whilst foreign state governments hold half of all stakes to run Britain’s rail services whilst our own government are, incredibly, locked out from bidding themselves.

We have a situation where our own government has attempted to monetise the education of our children, just so those at the top can freely hand themselves extortionate salaries and bonuses whilst the standard of teaching is watered down to maximise profits.

The arguments and evidence against the Tories’ failed privatisation agenda are everywhere you look across Britain.

If Britain truly wants to take back control, how about we start with the NHS, our railways and our schools.