The Joseph Rowntree Foundation released a report this morning showing that many families are failing to meet a suggested minimum income standard, resulting in millions living without a ‘decent standard of living’.

Based on public feedback, the minimum income standard is not a measure of poverty but an amount that the public thinks is required in order to have a ‘decent living standard’. This not only includes the amount needed for basic necessities such as food, clothes and housing, but also the ability to provide Christmas presents, to afford extra curricular activities for children and to generally take part in society.

It is calculated that the income needed to allow this is £40,800 per year for a family of four, which seems unattainably high when considering the ongoing affects of austerity.

Under the Conservatives, the minimum income standard feels an unreachable dream for the 21% of people living in poverty, resulting in many families missing out on the opportunity to have a decent living standard. According to the report, the annual income that the public believe to be essential has risen by 28% since 2008, whereas average earnings have only risen in this period by 9%. This is a good indicator of why a decent living standard is so hard to attain for so many working families.

Though Theresa May claims that she is helping those ‘just about managing’ families living on low incomes’, the report suggests that many people are living miserably and in fear of losing even their breadline living standards. It would seem that the Conservatives’ expectations of what people should be able to live on comfortably are completely detached from reality; it is clear that despite their claims, many in the UK are living below the required decent living standard.

While the number of unemployed adults is at its lowest since 2007, the study also found that the strong labour market has coincided with an increase in the number of workers in poverty. So, regardless of the ‘record high’ employment, the living standard is poor.

The number of people in poverty in a working family is 55% – a record high.

Providing family trips and treats is a continuous struggle for many working parents. In a Sky News interview, single mother Rebecca Bromley explained that after her monthly outgoings she is left with just £50 a month. Despite earning above the national minimum wage, she fails to meet the minimum income standard. Unable to afford little more than a cinema trip each month for her and her 9-year-old son, she says that birthdays and Christmases have become “worse each year”.

Occasions like these where parents would like to give their children gifts are a huge added pressure. It should come as no surprise that families sometimes have to resort to paying forms of ‘poverty premiums’, where they gradually repay gifts and experiences at high interest rates; the money required to purchase these things up front is simply not there. 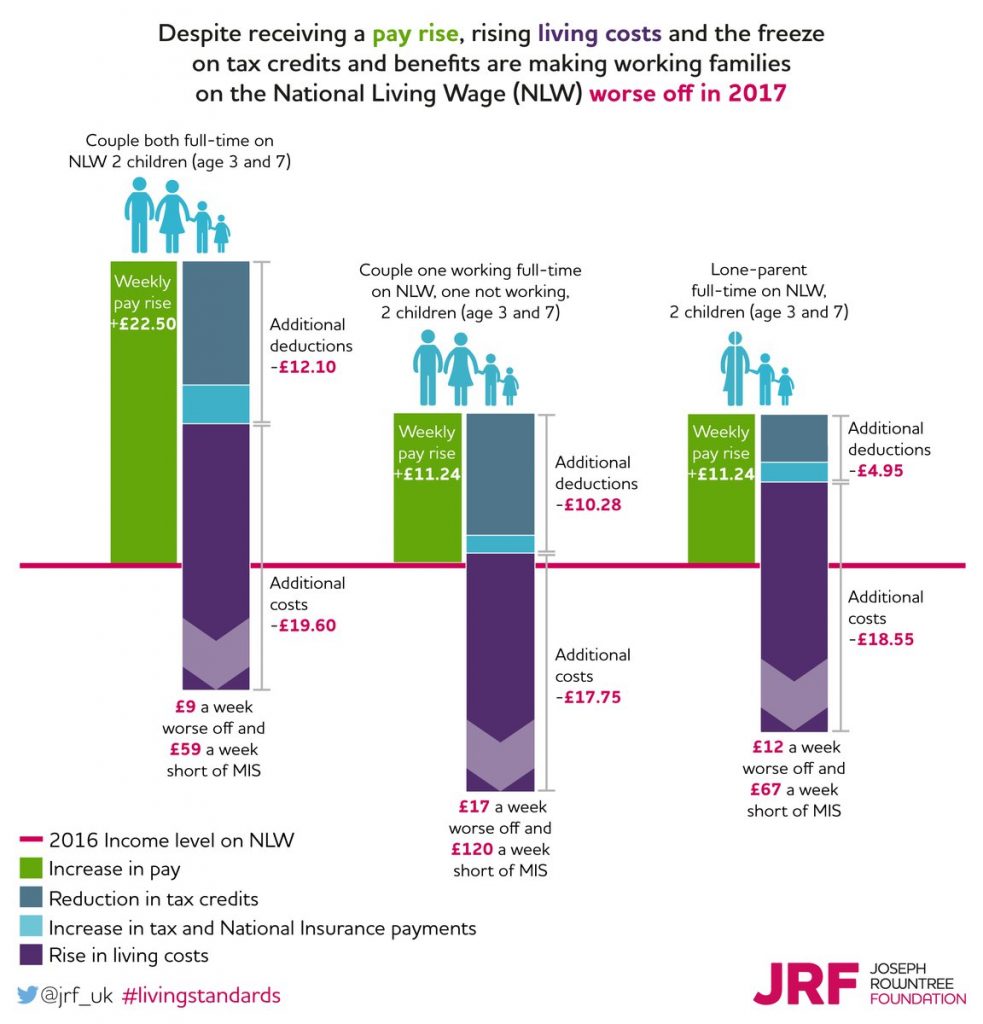 Working together is essential

The study concludes that many indicators do suggest that the UK has ‘recovered from the financial crisis’. So why are so many working families forced to endure struggling at this sub-standard level of living? The report suggests the main reasons responsible are: housing being too expensive, which is particularly hard hitting to those trapped in the private rented sector; work being insufficient; and social security failing those with everyday responsibilities, such as housing and council tax costs.

Protection from poverty may require ‘reconstruction of the economy and state’, so it is surely time for the government to stop telling us that everything is fine. We are living evidence that everything is not fine and that, for many, things are not getting better.

“We need to see the parties work together to address the big living standards challenges facing those people on low incomes”
Campbell Robb, The Joseph Rowntree foundation

Campbell Robb has suggested that the parties must work together in order to improve things, but one must question if this is realistically possible. The only thing that appears to unite the Tories with other parties is refusal to end the miserable conditions that society is crushed under. We were recently forced to watch the Conservatives and the Democratic Unionists cheer heartily as they celebrated their joint victory in voting down Labour’s proposal of ending the public sector pay cap.

Facing the evidence of the last 7 years, it would be understandable for the public to fear that the Tories will only work towards making the minimum income standard even more inaccessible than it already is. Surely Theresa May can no longer claim that there are “many reasons” that people from professions such as nursing are having to resort to using food banks – there is one reason, and the report makes this very clear: people are unable to afford a decent living standard, and this has got to change.